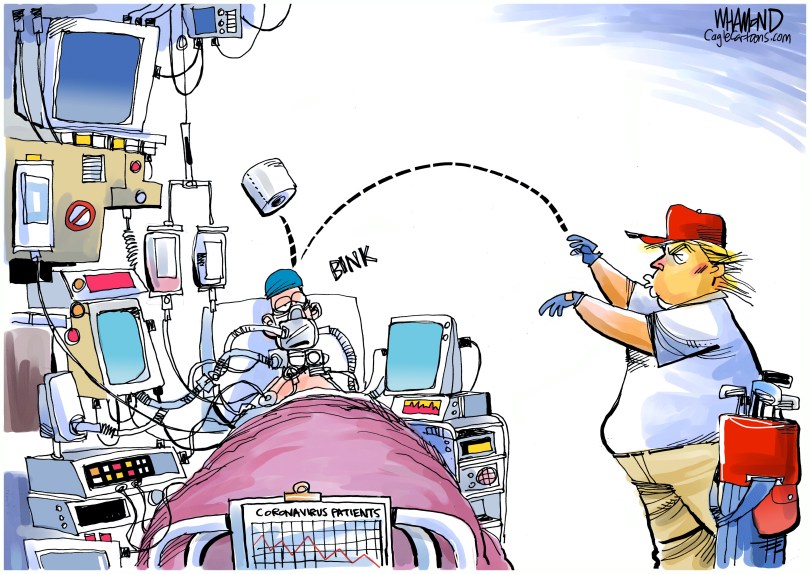 Now that the United States has been hit full force by the coronavirus pandemic, with more than 300,000 Americans infected and nearly 10,000 dead, a number of questions are arising concerning the major power’s ability to address the challenges to come.

The epicenter of the COVID-19 crisis in North America is currently located in Quebec’s neighbor state and its metropolis, New York. The recent remarks from President Donald Trump and his administration, as well as from certain state governors, paint an even more worrying picture of the weeks to come for the entire country.

This world health crisis has become the most serious threat to the American economy since the Great Depression in the 1930s. More than 10 million jobs were lost on American soil in March and predictions for the month of April promise to be even worse.

During this time, the Trump administration seems incapable of responding effectively and coherently to requests from governors and mayors of states and cities affected by the crisis.

The appalling shortage of equipment, overworked human resources, disagreements between the two levels of government … have become hallmarks of the president’s crisis management.

Fortunately, the U.S. Congress was able to adopt measures and a stimulus package of more than $2 trillion to alleviate the growing economic problems. This was done in a bipartisan fashion. And for the past few days, the relationship between federal and state governments has seemed to be improving.

However, the fact remains that Trump did not take the signs of this pandemic seriously, suggesting that the problem was only temporary and that the stability of the stock market was more important than the health of his people. Today, Americans are paying the price.

That being said, the time for taking stock and assigning blame and achievements will soon be here.

Against the backdrop of this crisis is the Nov. 3 presidential election. The electoral landscape has already been greatly transformed. The Democrats, with Joe Biden ahead of his opponent Bernie Sanders, are continuing their race virtually, something that is not helping their visibility and influence in the management of the pandemic.

President Trump, who has minimized the threat of the coronavirus from the beginning, has been engaging in daily press briefings.

Beyond the necessary information that he shares with his fellow citizens, he takes advantage of these media appearances to defend his earlier decisions and to settle scores with certain journalists that he deems too critical of him and his policies.

Trump also makes claims that only add confusion to messages delivered by the medical professionals that surround him, like the esteemed Dr. Anthony Fauci, director of the National Institute of Allergy and Infectious Diseases.

While he describes himself as a “wartime president,” he takes actions that elicit negative reactions from some governors, and leave allies like Canada and others in the European Union scratching their heads.

Since the Great Depression, Americans, under the leadership of different presidents starting with Franklin D. Roosevelt, have responded to various global challenges with courage, innovation and determination.

Whether it be issues of social or economic justice, the role of increasing international cooperation, or the dynamics of post-WWII reconstruction, this great country has always stepped forward.

During the post-WWII era, many institutions were established thanks to American leadership. We have only to think of the United Nations, of the General Agreement on Tariffs and the World Trade Organization, and of the North Atlantic Treaty Organization. That doesn’t even take into account its decisive involvement in nuclear arms control, the fight against terrorism, environmental stewardship, trade agreements, the Group of Seven leading industrial nations and the Group of 20 leading rich and developing nations.

Today, seasoned observers, like the reputed Nicholas Burns of Harvard’s John F. Kennedy School, are putting pressure on the American political class to take back its leadership role on the world stage. They reproach the Trump administration for the decline in American leadership, with its constant questioning of the international organizations dedicated to finding global solutions.

Of course, the “hyperglobalization” of recent years will once again be debated following COVID-19. But the fact remains that pandemics, like climate change, recognize neither borders nor countries.

Even if China (however far from being a model of global leadership) is currently responding to the medical equipment needs of Europe and North America, history has shown us that the United States has remained the key player in facing major global challenges for more than a century.

The world cannot do without American engagement. It is therefore necessary to move from the ”America First” of Trump to the ”America Together” of Roosevelt and his successors.

It remains to be seen if the next presidential election will launch the debate on the America of the future.