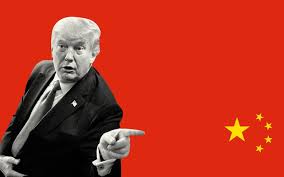 Since March, the U.S. has been aiming three poison darts at China.

Dart number one was to accuse China of concealing the extent of the COVID-19 outbreak and to falsely report the numbers of cases and deaths. Dart number two was to announce that the Wuhan Institute of Virology was the source of a coronavirus leak and to demand that China permit investigation by foreign experts. Dart number three was to support and provoke lawsuits against the Chinese government seeking compensation.

The Trump administration and the Republican Party devised these three poison darts. Their clear target is Beijing as this move is easy to justify as being politically correct in today’s U.S. However, Trump’s team is fully aware that these three attacks are not going to kill China – the measures the two countries have taken to fight the virus are not on the same level. Washington’s attacks at Beijing over the virus barely hold water. They are too far from the truth, and rely only on nationalism. It is hard to say how long it will be before these attacks fall apart.

Therefore, in the short term, the Trump administration has plotted these three attacks on the Chinese government as a diversion. They cannot kill China, but they may “kill” Trump’s rival, Joe Biden.

From the standpoint of the United States’ political logic, these three attacks are cleverly devised. They are all aimed at America’s “strategic competition,” i.e., China. The two parties in the U.S. have reached an agreement regarding the threat from China. The Democrats have been aiding the Republican government in condemning China to such an extent that it is becoming increasingly easier in the U.S. to blame Beijing.

Great. As the critical period of the presidential election approaches, the Trump administration is failing at combating the virus. Trump himself has said so much to downplay the outbreak, that those words today may severely threaten his chance of winning reelection. But by unleashing the aforementioned three attacks, Trump has clearly swayed public opinion in the U.S. “Who is to blame” is now “China is to blame.” “Don’t let Beijing avoid responsibility” is now the most popular slogan in the U.S.

In today’s United States, political opinions and value judgements are stronger than ever before, overtaking rules and laws based on science and facts. The U.S. is paying the price for its bias, as the virus spreads across the country, causing the world power to descend into the chaos of the Stone Age.

U.S. politics is all about roguery now. In its foreign affairs dealing, the country betrays allies and ignores rules; the same logic must also apply domestically. Washington has made its main strategy to suppress China, instigating anti-China sentiment among American society with the support of elitists in U.S. politics and sources of public opinion. With the Trump administration failing at controlling the outbreak and very possibly losing political control, Washington has found a scapegoat, China, in time to completely ruin the Democrats’ plan to dominate the election by taking advantage of the Trump administration’s failure. This move may help strengthen White House initiative in the election.

China is now the main topic in the presidential election. It is ridiculous that both Trump and Biden blame each other for not being tough enough on China. In the midst of this ridiculousness, the Trump administration has fired its three poison darts, diminishing some of the leverage Democrats have in the election and limiting the debate. If the issues of the U.S. presidential election remain centered around China, Trump may have a greater chance at winning.

The Republican state of Missouri has just sued China, demanding that Beijing compensate it for the loss caused by its citizens. Meaningless as it is, the lawsuit has caused enough controversy, and diverted attention away from dissatisfaction with Missouri’s response to the outbreak. This process will help with Trump’s reelection. It is immediately clear to those who are socially aware that the rule of law in the United States is giving way to politics, but the lawsuit may delude many average Americans.

It is the Americans’ business whom they choose as their next president. Unfortunately, China has become the center of the storm in this election. But there is no need for the Chinese to complain, for this may just be part of the burden involved in becoming a world power as we grow stronger. We need to start developing true power to defend our name, and we have a long way to go.