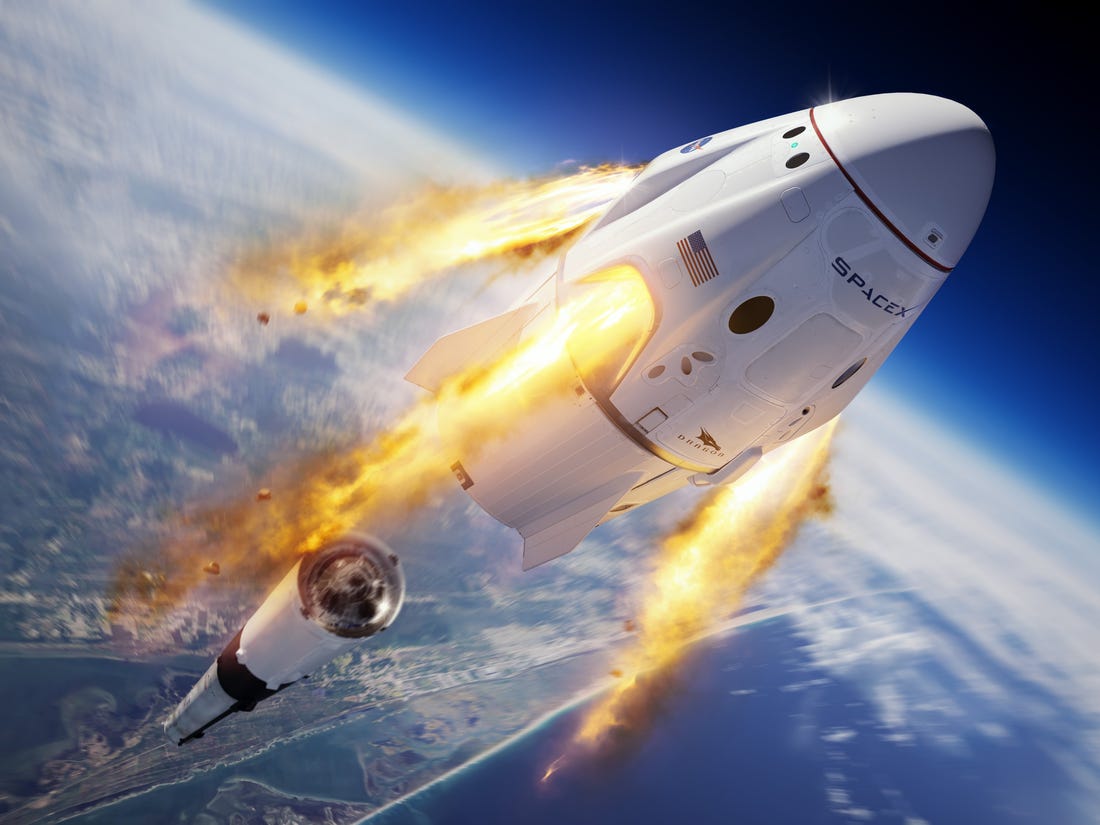 A new era of manned spaceflight is set to begin Wednesday, May 27 as part of NASA’s Commercial Crew Program. Astronauts Robert Behnken and Douglas Hurley, and the new manned Crew Dragon spacecraft, manufactured for NASA by Elon Musk’s SpaceX, are ready to blast off into space and fly to the International Space Station on the Falcon 9 rocket. This will be the start of the new Launch America mission.

The liftoff is scheduled to take place tomorrow* from Launch Complex 39A in Florida at 4:33 p.m. local time. If the launch has to be postponed due to weather conditions or for any other reason, it will take place on May 30. The Demo-2 mission to the space station is set to go for an extended stay (one to four months), but the specific duration will be determined at a later date. During the flight, the transportation system will be validated, including the launch pad, the rocket, the spacecraft and operational capabilities, as the final flight test for SpaceX.

Behnken and Hurley were among the first astronauts to begin working and training on this spacecraft. They were selected as NASA astronauts back in 2000 and have each completed two flights on the space shuttle. It’s symbolic that Hurley participated in the final flight of the space shuttle in 2011, and is now the commander of a new spacecraft whose flight is set to recommence full-scale manned space activity in the U.S.

The next-generation Crew Dragon spacecraft is the United States’ fifth type of manned spacecraft expected to get people into space. Before it came Mercury, Gemini, Apollo and Space Shuttle. If the U.S. succeeds, it will once again gain full independence in terms of NASA astronauts’ access to outer space. And from national territory at that. This comes after an almost nine-year hiatus (since July 21, 2011) during which they flew to the space station and returned to Earth exclusively on the Russian manned Soyuz spacecraft.

Over the years in which the U.S. has been forced to rely on other countries to carry out manned space missions, much has been done to create a new generation of manned spacecraft and other technologies. The manned space program has been reformatted: from the production of new strategies, goals and tasks; to the creation of new teams, innovative technologies and infrastructural facilities. Several new projects and manned space systems are being developed and implemented, particularly for flights to the moon with the Artemis program.

The new manned spacecraft is the quintessence and the important result of the U.S. returning to fully independent manned space activity. The Crew Dragon is radically different from everything that has come before it; reflected in the almost fantastical design of the cockpit and interface, the organization of the crew’s interaction with the equipment and the astronauts’ beautiful, ultra-fashionable spacesuits.

Unlike NASA’s traditionally conservative approach to creating and evolving space technology, Musk and his team at SpaceX are taking a new approach. They are creating highly innovative equipment at a significant rate, refining it, and increasing reliability and safety according to the results of tests and trials during which defects are detected and occasional malfunctions and crashes occur. However, this is not by trial and error, but a well-thought-out strategy.

For the first time in the practice of creating and trialing generations of manned spacecraft in the U.S., this new spacecraft has been “raised” differently. The manned Crew Dragon is a modified version of the partially reusable SpaceX Dragon cargo spacecraft, which for a long time regularly delivered cargo to the space station with an automated system. Its development began in 2004; it was operational by 2010 and it made 20 trips.

The Crew Dragon prototype was first presented by Musk as Dragon 2, the manned version of the Cargo Dragon, back in 2014. The spacecraft was scheduled to fly in 2017, but due to technical difficulties (with the Falcon 9 rocket, etc.), its premiere was postponed. Over the last six years, a full cycle of necessary works, trials, tests and certifications has been carried out. In March 2019, the first trial flight (without crew) to the space station was successful. Following this, cycles of rigorous and successful trials of the escape and other systems were carried out.

The upcoming launch is not just an important event and the start of a new stage in the development of space technology and NASA’s Commercial Crew program. The Launch America mission is nationwide and political. It demonstrates the United States’ capabilities and provides evidence of its greatness and leadership in the technology and space industries. At the same time, it’s an attempt to escape from the grim crisis caused by the pandemic and its consequences. It represents a desire to achieve real success and restore people’s belief in the country’s great future, both on Earth and in space.

The U.S. president plans to take part in the first manned launch of the Crew Dragon spacecraft. NASA and the media are widely publicizing the upcoming liftoff and it is actively being discussed by the public. Many in the U.S. are waiting for this launch like they would a new opportunity or celebration: as if it weren’t just two astronauts, but the whole of America being launched into space. And this is generating new goals and ideas, particularly among young people. It is inspiring, mobilizing and encouraging them.

The first trial flight of the crew on the new spaceship is a big risk and a big responsibility for those flying into space, for the creators of the technology, for the entire crew program and for the country that is making it happen. Note that while preparing the Crew Dragon for the flight, the wishes of the Roscosmos State Corporation for Space Activities were taken into account to ensure the safety of the upcoming docking with the space station and of the long-term collaboration.

The success of the astronauts’ upcoming flight on the Crew Dragon is extremely important for Russia, its space industry, its teams of astronauts and all those who are working on Russia’s national crew program. This could become an example and the impetus for speeding up the creation of our own new spacecraft. It is also a symbol of hope that a new era and new achievements in the development of manned space exploration stands before Russia.

*Editor’s note: SpaceX launched its Crew Dragon spacecraft on May 30, 2020.