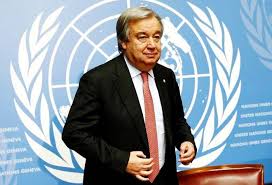 The U.N. secretary-general has once again called for a cease-fire of those in the armed conflict and has been met with Indian fanaticism.

U.N. Secretary-General Antonio Guterres reiterated his call for a cease-fire between the parties to the ongoing armed conflicts around the world. Recently, he submitted a report to the Security Council that said the coronavirus pandemic will be the biggest challenge the world has ever faced. In the last year, 20,000 civilians have been killed and millions have been displaced due to various conflicts. In some areas of the crisis, it will be necessary for the parties involved in the armed conflict to fight the coronavirus outbreak as a team. In this Eid al-Fitr message, the secretary-general made it clear that the world is like a body. Solidarity and unity are necessary with respect to the coronavirus. Guterres also recognized the positive response to his March 23 call for a ceasefire, but said that there were challenges in how it was being carried out. Now, more than ever, solidarity and unity are critical. Above all, it is important to remember that we are one body, one world, and one United Nations.

The idea of peaceful coexistence certainly takes precedence in the U.N. Charter. As such, in the event of a dispute between member states based on the bitter experiences of the former League of Nations, the parties must adopt a policy in which they refrain from taking up arms. In this regard, an effective means of resolving the conflict between member states must involve the United Nations. However, this has not happened to date. This representative international body is practically held hostage by a few members which do not allow the passage of any resolution that goes against their interests, or which make the implementation of resolutions which pass nearly impossible. In this way, the United Nations has become a lot like the League of Nations whose decisions or resolutions were not considered worthy of attention. The future of Kashmiris and Palestinians will have to be decided by forcibly implementing the U.N. resolutions in the countries concerned.

What could be more awful than the fact that the United States, in its aim to be a superpower, not only creates conflicts with various countries but also strengthens its zeal for war and its expansionist policy by sponsoring Israel and India in pursuit of Muslim unity, while it disregards all relevant U.N. resolutions? Similarly, the United States has played a key role in the development and proliferation of modern nuclear and conventional weapons in the interest of its security, which it considers a right. As a result, hostile countries such as India and Israel are able to act openly, and the United Nations continues to watch silently.

At a time when the whole world is dealing with the coronavirus – when 5 million people have been infected and half a million people have died worldwide – the United States is planning to invade China, blaming it for the spread of the virus and looking for an opportunity to detonate a new nuclear bomb. At the same time, the Narendra Modi government, which has already created an atmosphere of oppression in occupied Kashmir and has kept the Kashmiri people under house arrest for the last 296 days under the guise of preventing the spread of the virus, has not only taken more stringent measures against Kashmiri Muslims, but has started to spread the virus to Muslims all over India. It has even banned the call to prayer in mosques while maintaining a climate of war with Pakistan over the Line of Control. In the same way, India is using the Afghan territory to train terrorists with the intention of undermining Pakistan’s security because India, with the help of the Kabul administration, will now allow its terrorists to cross the Afghan border into Pakistan.

Serious human rights violation by India in Occupied Kashmir are on the radars of all representative international and regional bodies, including the United Nations, as well as all world leaders, including the United States. But to date, no practical steps have been taken to stop the Modi government. The U.S. Commission on Religious Freedom, in its report released last month, described India as a very dangerous country based on the Modi government’s fanatical measures against Indian minorities. It even suggested blacklisting India. Similarly, a virtual conference organized by the Organization of Kashmir Coalition has proposed forming a commission to investigate human rights violations in Kashmir. U.N. military observers have already visited the Line of Control and Occupied Kashmir in order to draw attention to the human rights violations by India. Despite the U.N. secretary-general’s March 23 appeal, the Modi government has continued to take action against Kashmiri and Indian Muslims. The use of force hasn’t stopped, and the Modi government has continued unprovoked firing and shelling on civilian populations along the Line of Control. Even the day before Eid al-Fitr, the Indian army targeted several villages in the Khuiratta sector, injuring a woman.

In this situation, the United Nations has to play a practical role in curbing Indian fanaticism and its expansionist policy, a role which would be most effective if it imposed global economic sanctions. How can a rebellious country like India, which has become a rogue elephant, be stopped if the U.N. secretary-general continues to urge conflict ridden countries to agree to mere formal and verbal ceasefires while India is on the verge of causing a global catastrophe? The practical and effective role of the United Nations is necessary today. Otherwise, it won’t be long before the philosophy of “whoever has the stick, gets the buffalo” prevails in the world.