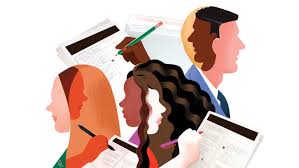 When you live in the United States, you are always a “race.” Even if you don’t want one, you are forced to have one.

The intensity of the protests against racism following the murder of George Floyd by four police officers in Minneapolis forces us to question the meaning of words, beginning with what Americans mean by “race.”

Let me start by saying that on this question, there is no safe haven. When you live in the United States, you are always a “race.” Even if you don’t want one, you are forced to have one.

I experienced this in 2010 during a six-month stay in Arizona with Julie and our twins. Despite what we feared for our children, who are of Haitian descent, they did not experience any outward racism. But what really struck me was how consistently the subject of race came up: in the news, in conversations — even in the questionnaires from school, the day camp, from the doctor. Last name, first name, race. You must tell us your race.

In the United States, it always comes back to bloody race. In 2010, Barack Obama asserted, straight-faced, that his country had moved into in the “post-racial” era, which I always found to be presumptuous. All of American society is organized racially, nearly spontaneously so.

It is when Americans attempt to explain what is meant by “race” that the strangeness of the concept becomes apparent. For example, at the doctor’s office where I went because of the flu, the questionnaire asked me my race. But behold the options presented: African American, Alaskan Native, Asian, Black, White, French, German, Greek, Hawaiian, Hispanic, Indian, American Indian. This might make sense for certain illnesses, to which one’s ethnic group might be predisposed, but I don’t know what illness are specifically “Black” and not “African American.”

The bizarre side of the concept of race is nowhere more evident than on the national census form, which we took part in in 2010. (The description that follows is based on the questionnaire from 2020 sent to 128 million households last March and which is practically identical to the one from 2010).

It consists of a simple form of nine questions on two very well-spaced pages. Four of these questions identify the respondent (name, sex, age, phone number). Three others deal with types of housing and the occupant categories (students, children, grandparents). The final two questions (half the questionnaire) focus on race. Note there is nothing about socio-economic status.

Question No. 8 asks if you are of “Hispanic” or “Latino” or “Spanish” origin. If yes, they want to know if you are “Mexican,” “Puerto Rican,” “Cuban,” or “other” (for example, Salvadoran, Dominican, etc.).

If you respond, “White,” you must specify, for example: “German, Irish, English, Italian, Lebanese, Egyptian.” That is “white.”

If you respond, “Black or African American,” they ask you what kind. For example: “African American, Jamaican, Haitian, Nigerian, Somalian.” (The term “Negro” has disappeared from the 2020 form.)

One notable omission: There is no “yellow” race. That is because in English “yellow” also refers to the color of cowardice. In the face of this semantic problem you are asked to check without much precision if you are of the “Chinese,” “Filipino,” “Asian Indian,” “Vietnamese,” “Korean,” “Japanese,” “Hawaiian,” “Samoan,” “Chamorro,” “Other Asian,” or “Other Pacific Islander.”

Finally, the last option: Are you of “another race”? As, since the 1960s, each person can belong to the race of one’s choice.

It Is the Racist Who Invents Race

The notion of race as understood in the United States is therefore an utter mess — an explosive mix that conflates ethnicity, country of origin, skin color, and commingles colonial factors and “political correctness.” You have to be seriously out of touch to consider the existence of a Chinese race distinct from the Korean or the Japanese ones. Each questionnaire obliges the respondent to participate in a sort of collective delirium whose terminology mimics the taxonomy of domestic animals. The subspecies of dogs, cats, and livestock are “races” in the jargon of breeding.

They right away found this affair in black and white ridiculous. “First, we’re not black, we’re brown,” they protested at the tender age of 6. “And you, you’re pink!”

Their spontaneous reaction seemed to me the only logical one in a context where one must proclaim one’s race.

Racism exists, and it must be confronted. Which does not mean that race exists. In his “Reflections on the Jewish Question,” published in 1946, Jean-Paul Sartre states that it is the anti-Semite who invents the Jew. In the same way, it is the racist who invents race and crushes those he judges inferior. But the solution for the crushed is not a simple one, as their condition stems directly from the constraints of the race imposed upon them — and that is difficult to deny.

Americans are capable of very great things, but their obsession with regard to race is a birth defect that is the focal point between the slave history of the country, the war on Native Americans and the annexation of half the Mexican territory in 1848. The deep imprint of “Biblical Protestantism” must be added here. This doctrine, which goes back almost to the beginnings of the Protestant Reformation five centuries ago, comprises a reading of the Old Testament that aims to show that the Protestants are a “chosen people.” The “wealth” of American racism has given rise to two original means of expression: the cult of guns, and the doomsday prepper (the need to protect oneself against the threat of imminent chaos), which powerfully reinforce the racist system.

Because harsh discrimination marks the lives of Americans named “Black,” and other raced peoples, their associations must engage in a continuous struggle, and governments must implement policies to combat racial prejudice, which means statistics and questionnaires. But Americans are endlessly butting against the wall of race, erected as a system and insurmountable. They devote billions of dollars to create a narrow census form in order to put in place ineffective strategies to fight discrimination, and to stammer out solutions.

One of the rare federal holidays in the United States is Martin Luther King Day (the third Monday in January), which commemorates the birth of the great champion in the struggle against racial discrimination. Barely 10 days after we arrived in Arizona, we went to the city of Mesa to attend the parade. Sitting on a curb, we saw around 50 groups of Black politicians, white Democratic candidates, Black motorcyclists, Muslim scouts, and marching bands from white schools. Remarkably, none of the groups was mixed — least of all the religious ones. The only mixed group was the horseback riders from the Western Riding Club. For a celebration that aims to combat racism, the irony was perfect.

Let us wish them luck while hoping that, here, we will do better.