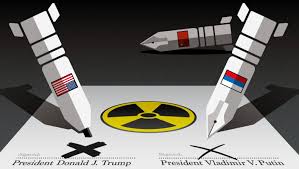 Recently, U.S. Special Presidential Envoy for Arms Control Marshall Billingslea stated that he has now reached an agreement with Russian Deputy Foreign Minister Sergei Ryabkov to discuss the issue of the New Strategic Arms Reduction Treaty, which was signed on April 8, 2010 and is due to expire on Feb. 5, 2021. He also claimed that China has been invited to participate. However, both China and Russia have made it clear that China will not participate, so what are America’s reasons for sensationalizing this issue?

As Bloomberg reports, the negotiations will be held in Vienna on June 22. As for this soon-to-expire treaty, United States National Security Advisor Robert O’Brien stated that America may not necessarily need to withdraw from New START and instead hopes that China will join. However, the U.S. must first negotiate with Russia. Russia recommended that America extend New START in its current form for an additional five years in consideration of the multifaceted challenges that may arise.

The U.S. and Russia signed New START 10 years ago with the intention of limiting the number of nuclear warheads that can be held by both parties to a maximum of 1,550. This treaty is the only arms control treaty between the two nations. America’s invitation to China to join in on the negotiations, I believe, has five main motivations:

Second, the U.S. intends to shift responsibility for the continued development of nuclear weapons to China. The U.S. can still impose this responsibility on China, regardless of China’s participation in the negotiations or opinions on the matter.

Third, the U.S. is attempting to cover up its many years of noncompliance with the agreement. Through negotiation, America intends to make every effort to cover up the continued updates and renovations it has made to its active-duty nuclear weapons. In addition, America has never ceased the research and development of new tactical nuclear weapons.

Fifth, America wants to further understand the current status of China’s nuclear development. The author has participated in three China-U.S. talks on nuclear weapons strategy and has the deep sense that America has deployed every means to glean the number of nuclear weapons China holds, China’s nuclear force deployment and its plans for future development, etc. They invited China to the talks to scope out our nuclear ability.

How Should China Respond?

On the issue of inviting China, America created the illusion in March that it intended to avoid an expensive arms race by proposing a nuclear arms control mechanism that involved the U.S., China and Russia. Actually, China has always been willing to work on nuclear arms control mechanisms with other parties under existing multilateral frameworks. With regard to nuclear disarmament, we believe that America should heed Russia’s calls to extend New START by an additional five years to further reduce the vast nuclear arsenals of the two countries and pave the way for other states to join multilateral nuclear disarmament negotiations.

I believe that the negotiations to be held in Vienna on June 22 show that the U.S. attitude on extending New START has softened. In a sense, this is a good thing.

I have four basic judgments and warnings to make about the prospects of the talks. First, the status of the United States and Russia as the world’s leading nuclear powers will remain unchanged. According to Japan’s Kyodo News, there were 14,480 active warheads in the world (excluding those in storage) as of June 2019, of which 6,850 are in Russia, 6,450 are in the United States, and fewer than 500 are in other countries. Thus, in the coming decades, the status of the U.S. and Russia as nuclear superpowers will not change.

Second, neither country will hamper the development of new nuclear weapons. In recent years, the United States has withdrawn from a number of arms control treaties, including the Intermediate-Range Nuclear Forces Treaty and the Open Skies Treaty. Although Russia has stated its willingness to extend the terms of New START, the United States has not yet responded. In reality, the two countries have never stopped improving their active-duty nuclear weapons, such as the RT-2PM2 Topol-M and LGM-30 Minuteman intercontinental ballistic nuclear missiles, nor have they ceased the development of smaller, low-pollution tactical nuclear weapons.

Third, the threshold for the use of nuclear weapons continues to fall. The development of nuclear weapons is no longer an out-of-reach, state-of-the-art technology; even small and medium-sized countries can manufacture them. The treaties and agreements governing their development have been cut short and dismantled, leading to the escalation of a global nuclear arms race. The nuclear threat facing the world continues to rise.

Fourth, we must guard against the use of nuclear technologies and the potential of nuclear war with utmost vigilance. With regard to the increasingly tense, increasingly serious nuclear weapon situation worldwide, the international community must staunchly oppose extreme criminal acts as crimes against humanity, crimes which will irreversibly pollute the common environment of mankind and endanger future generations.

The author is an expert on Chinese nuclear strategy, nuclear arms control and missile technology.