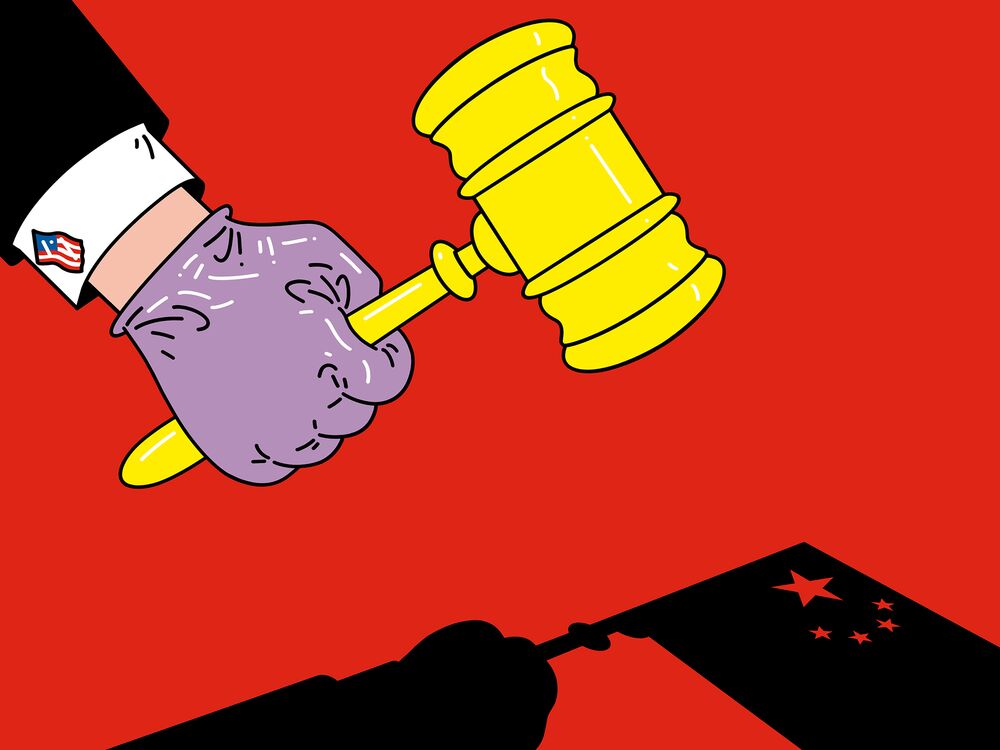 In the fight against the COVID-19 pandemic, some American politicians have taken zero responsibility and made zero contributions; instead, they have shamelessly passed the buck to others and spread defamatory rumors. Since March, a small number of individuals and certain states have set out to sue the Chinese government, demanding that China compensate losses caused by the outbreak of COVID-19. This absurd action will only prove to be a ridiculous farce.

The law is all about evidence and requires speaking the facts. China was the first to make the outbreak known, but that does not mean the virus originated in China. Besides, U.S. researchers have proven that the strains of the virus present in many cities, including New York, did not come from China. There are no grounds to discuss reparations or for holding China responsible. Furthermore, sudden major infectious diseases fall under the umbrella of global public health crisie, which are considered under legal principle to be a force majeure, and therefore are simply not justiciable. Going back in history, the Spanish flu originated in the U.S., and brought on a massive humanitarian disaster. Should the U.S. be held accountable? AIDS first appeared in the U.S., and there are as many as 75 million infections and 34 million AIDS-related deaths around the globe; should the U.S. pay reparations for that?

The small number of American politicians seeking reparations must surely understand this simple logic. Nonetheless, they are still fond of spreading lies, such as claims that China covered up the outbreak. They have even made use of the legal system to initiate a lawsuit against China. When you look beyond the surface, it’s not hard to discover the sinister intentions of these U.S. politicians. For one thing, they mislead the public and blame the spread of the outbreak on China to distract the American people from investigating their own insufficient response to the pandemic. For another, they sensationalize the idea of holding China responsible and demand reparations hoping to discredit China with the public around the world. As some scholars have said, there are politicians in the U.S. who are unwilling to take responsibility and address issues, who instead are always trying to conjure up some scapegoat.

There is a legal maxim that states “equals have no sovereignty over each other.” According to the principles of sovereign equality and sovereign immunity, the court of any country has no jurisdiction over the sovereign actions taken by any other country’s government in response to the pandemic. These plans of these politicians to initiate legal action is simply not in keeping with the legal process and is unlikely to produce any substantial legal consequences. Former State Department Counselor on International Law Chimène Keitner believes “any scholar or practitioner with working knowledge of the law of foreign sovereign immunity would have taken one look at the headlines about these lawsuits (as I did) and assess immediately that there is no basis for jurisdiction in a U.S. court. Filing indiscriminate lawsuits against China is a dead end; there is no factual basis, no legal basis, and no international precedent. Acting in the name of the law while completely disregarding the spirit of law and order is not only an insult to the basic principles of international law, it also fully exposes international hegemony and power politics.

The rule of law has always been one of the core values that the U.S. is proud of. But the kind of “rule of law” that some politicians are speaking of is wholly unrelated to equality and justice. It is nothing more than an excuse to seize political benefit, a tool for strengthening American hegemony. Researchers have pointed out that seeking international reparations is a tactic that has consistently been used by Western countries like the U.S.; now, with the virus continuing to fester, the move has strong political motivations. A Columbia University research shows that the delayed COVID-19 response in the U.S. led to at least 36,000 deaths. As China was continuously issuing warnings to the world, some U.S. politicians repeatedly claimed that the novel coronavirus was nothing more than a bad flu, allowing key opportunities to protect against the virus to slip by repeatedly. Traditional allies of the U.S. like Australia also acknowledged that the virus in their countries came primarily from the United States. If we truly want to hold someone accountable, it is those irresponsible, American politicians without a conscience that ought to be sitting at the defendant table.

“China will never accept any frivolous lawsuits or compensation claims.” The recently published white paper titled “Fighting COVID-19: China in Action” asserted this clear and resolute pledge in response to actions seeking to blame the pandemic on China. This pandemic emerged suddenly, striking a heavy blow to nations around the globe, snatching away hundreds of thousands of precious lives. Only by uniting arm in arm, opposing the politicization of the pandemic and labeling of the virus, by opposing racism and ideological prejudice, and firmly upholding international justice and equity will we gather the formidable strength required to overcome the pandemic, and protect the peace and health of humanity together.