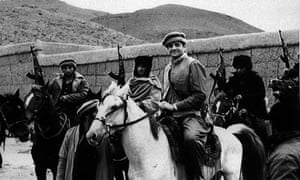 Another anti-Russian scandal is breaking out in the United States. This time, Russian military intelligence is accused of financing the Taliban for the sake of killing American soldiers. Without discussing such cheap and unsubstantiated speculation, I would like to recall the actual operations of the CIA in the not-so-distant past. Operations that were conceived and carried out by the Americans directly for the purpose of killing Soviet servicemen – this is about the Soviet-Afghan War.

After a series of failures by American intelligence services, the U.S Congress approved a new set of rules prohibiting the CIA from engaging in “dirty operations” in late 1979. In December of that year, the CIA voluntarily shut down all operations which might fall under this definition.

Therefore, when Soviet troops entered Afghanistan at around the same time, American intelligence officers had no illusions about the efficacy of their possible actions to support the USSR’s opponents. However, then-U.S. president Jimmy Carter gave the go-ahead to support the Afghan insurgents. The United States was prepared (like Pakistan, Saudi Arabia, China and an array of Muslim countries) to supply the mujahedeen with weapons. But nobody in the CIA imagined that they could win this fight.

Following established practice, the CIA tried to exclude weapons made in the U.S from the supply to Afghanistan (as well as to other countries.) At that time the secrecy of the operation was extremely important, thus everything was done in order to maintain plausible deniability for what was happening. Subsequently, the first consignment (of around 1,000 units) delivered to Pakistan from a secret base in San Antonio consisted of Soviet weapons and ammunition that were prepared by the CIA specifically for such a purpose. In the future, the Americans purchased stores of British Lee-Enfield rifles and ammunition from World War I in large quantities for the Afghans.

The most important thing was something else. In 1980, the budget for supporting Afghan bandits was only $5 million a year. In 1981 this amount was doubled, but still remained meager – less than the cost of a single combat plane.

And at this moment, the war in Afghanistan was very much of interest to an ardent anti-communist congressman from Texas, Charles Wilson. He calculated that Afghanistan could become for the Soviets what Vietnam had been for the United States. As a member of the House Appropriations Subcommittee, he was able to seek increased funding for this war, which he soon considered to be his own crusade. But in order for the money he acquired to be spent correctly, he needed connections in the CIA; however, the intelligence agency was not used to working closely with people from Congress, rightly fearing a high chance of leaks and further scandals.

The CIA’s new chief of operations in Islamabad, Howard Hart, believed that the Americans were achieving important goals by supporting the Afghans: first, forcing the USSR to divert modern military equipment from the European theater of operations, where Warsaw Pact troops stared down NATO; second, inflicting damage to the Soviet budget. In his opinion, it was necessary to spend less, but more effectively. The same position was held by the President of Pakistan at the time, Zia ul-Haq, who said, “We must boil the brew for the Russians, but so that it does not spill out on Pakistan.”* Both the Americans and the Pakistanis were afraid that if they increased their involvement in Afghan affairs, the USSR might move troops into Pakistan.

Hart’s opinion was at odds with that of Wilson, who wanted to win the war – an idea that was fantastic for that period. However, his conviction and willingness to find funds to escalate the fighting pleased the head of the CIA’s Middle East division, Chuck Kogan. As a result, by 1983 the amount of American aid to the mujahedeen had increased to $30 million a year. But even this was insignificant money to support a war against such a powerful force as the Soviet 40th Army.

In addition, Gust Avrakotos was appointed as the head of the CIA’s operations center in Afghanistan. This officer had a wealth of experience in conducting covert operations and soon became an associate of Wilson. Avrakotos’s appointment seriously changed the attitude of the CIA (and therefore the U.S.) to this war. Moreover, in 1983, Wilson managed to win over the Chairman of the House Committee on Appropriations, Doc Long. Furthermore, Wilson negotiated with Saudi Arabia that for every dollar spent by the United States on the war, Saudi Arabia would invest its own. Thus, the amount of mujahedeen funding had increased markedly by 1984. And all these people sought to kill Soviet soldiers – and kill them they did.

It was around this time that Charles Wilson learned of a weapon that the mujahedeen had no means against – Soviet Mi-24 helicopters. To fight them, the mujahedeen used Chinese-made DShK machine guns, but they were ineffective – the bullets simply bounced off the helicopter’s armor. Consequently, Wilson began to search for another weapon.

Wilson was presented with two systems to choose from: the Swiss Oerlikon anti-aircraft automatic gun and the Soviet ZU-23-2 twin anti-aircraft automatic guns stored in the warehouses of the Egyptian Armed Forces. These systems made it possible to reach Soviet helicopters at an altitude of 5000 meters. But the Egyptians were not able to demonstrate the effectiveness of anti-aircraft guns in the mountains or the possibility of transport by pack animals. As a result, a small batch of Oerlikons was purchased. And funding for purchasing weapons for the mujahedeen increased by another $100 million.

The CIA was also looking for weapons against the Mi-24. Avrakotos managed to organize a secret purchase of Soviet-designed man-portable air defense systems (MANPADS) produced in factories in Poland. This was facilitated by a Polish general who hated the USSR – he supplied the Americans with a large batch of “Strela” MANPADS from the Polish army warehouses. The Chinese also supplied similar missiles. An attempt was made to buy the same missiles from the Egyptians, but they were stored in shameful condition and turned out to be unfit for combat. Using his experience and knowledge of the black market in arms, Avrakotos was able to sharply reduce the cost of weapons and ammunition purchases for the mujahedeen, thereby increasing the amount of supplies.

In 1984, Gust Avrakotos received Michael Vickers, a former Green Beret, as part of the CIA’s operations center in Afghanistan. This man knew the secrets of guerrilla warfare better than anyone else. It was he who managed to correctly calculate how to best use allocated money. Vickers calculated the staff of the Afghan mujahedeen guerrilla units, the standard weapons, the necessary amount of ammunition and other items of logistics that were to be sent to Afghanistan. In particular, he believed that the main tactical unit of the mujahedeen should be a detachment of one hundred people armed with AK-47s and three machine guns.

One of Vickers’s main demands was to increase the number of MANPADS purchased for the Afghans by an order of 20 to 30. He believed that there was no need to look for only one means of air defense against helicopters, and that a combination of various types of weapons could be effective.

According to Vickers’s calculations, the mujahedeen needed a budget of $1.2 billion a year to successfully wage war against Soviet forces. After Vickers successfully presented his program to not only the CIA but also Wilson, the amount of appropriations for the Afghan program increased to $500 million, half of which was from the U.S Congress and the other from Saudi Arabia.

However, finding Soviet weapons on the black market was not simple. Here the CIA’s cause was helped by the Chinese communists, who produced Soviet weapons both under Soviet licenses and without them. In fact, the bulk of the weapons entering Afghanistan after the late fall of 1984 were Chinese-made. As a result, the price of Kalashnikov rifles fell to less than $100 and the price of infantry mines fell to $75 each. However, when equipping the mujahedeen with MANPADS, the Chinese could not offer anything other than their self-produced Strela. This system was outdated, and Soviet helicopters successfully avoided them by using heat traps and the “Lipa” device. A question arose about the acquisition of the latest British MANPADS, the “Blow Pipe,” for the Afghans.

In 1985, Chinese missiles began to arrive in Afghanistan, which the mujahedeen used, aiming them with sandbags and other makeshift tools. However, the CIA was looking for missiles with a range of more than 10 km and found … the famed Soviet “Katyusha” in the warehouses of the Egyptian Armed Forces, which were delivered by the USSR at the time. They were also purchased, delivered to the Democratic Republic of Afghanistan and used for shelling Kabul.

The year 1985 proved to be a turning point in the war. The Americans believed that at that moment Soviet Union could still win if it increased the number of its forces to half a million people. The same idea is held now by field commanders who fought against the Soviet Army at the time. They admit that a little more and their resistance would have been broken. But this did not happen. Mikhail Gorbachev came to power in the USSR. From late 1985 to early 1986, the decision was made to supply Afghanistan with the latest American MANPADS, the “Stinger” missile. It made a real difference in the mujahedeen’s fight against Soviet helicopters and planes. The United States had increased the amount of funding and weapons purchases to the mujahedeen so much that it was no longer possible to hide it. Moreover, now that the CIA budget for this war was $750 million, the Americans were no longer afraid that the fact of their assistance to the Mujahedeen would become known to the USSR. As one of the CIA operatives put it: “And what if the KGB finds out about our assistance to the Afghans? Will they sue us?” **

In 1985, the CIA spent more than 50% of its congressional budget on Afghanistan, more than 70% in 1986. In 1987, the combined U.S-Saudi funding of the Afghan mujahedeen reached $1 billion. And Soviet troop losses in Afghanistan amounted to thousands of soldiers and officers. They were actually killed with the money of the United States of America.

What can we say about the American media and politicians who today accuse Russia of financing the murder of just three American soldiers? That this is technically, politically, and even ideologically absurd? That even if the Russian secret services wanted to pay for this, they would not have left any traces of such funding?

Their fantastic hypocrisy can only be compared to their political fanaticism and myopia.

*This exact quote could not be found, however a similar quote, “The pot should be kept boiling, but should not boil over,” that was said in reference to Afghanistan, could. (SEE HERE)

**This quote could not be sourced.