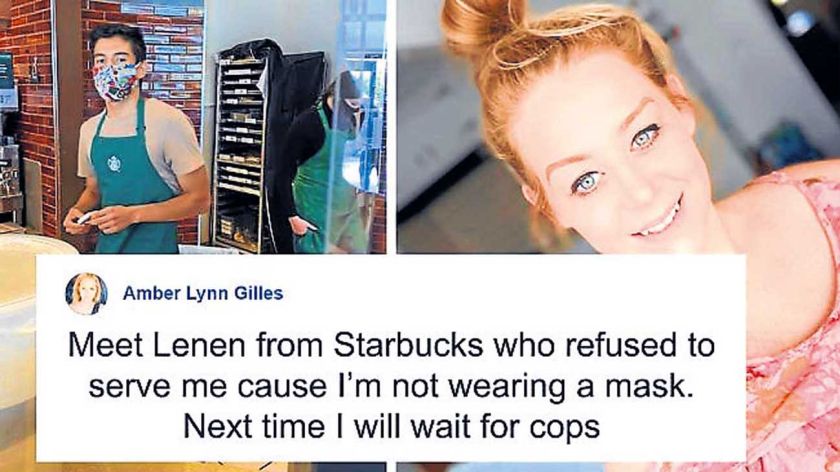 In the era of Black Lives Matter, new words and harassing practices appear on social media, where public denunciations can become a double-edged sword.

Consider this: A woman enters a Starbucks coffee shop in San Diego, California. It is late June and many of the social distancing and hygiene measures imposed due to the pandemic are now in effect.

The woman, Amber Lynn Gilles, white, blonde and middle-aged, enters the shop without a face mask, breaking one of the rules established to prevent the spread of the virus. The young barista, Lenin Gutiérrez, Hispanic — as his name implies – kindly tells her that they cannot take her order if she is not wearing a face mask.

At this point, the rule in Starbucks is: “No mask, no service.”

Amber Lynn does not like this. So, she starts yelling and insulting Lenin.

She claims that she has a right to stay and be served because she has “respiratory issues” that prevent her from wearing a mask. However, she does not have any kind of certification to prove it, which is required by the norms that regulate the exceptions to the COVID-19 “new normal” protocol.

Amber Lynn keeps yelling, but Lenin does not prepare her Caramel Macchiato or Mocha Frappuccino (the order was never clear) because she is not wearing a face mask. The woman’s temper keeps getting hotter and she goes to the battlefield of our time: social media.

“Meet lenen from Starbucks who refused to serve me cause I’m not wearing a mask,” wrote Amber Lynn in real-time and posted it to Facebook, although she made a spelling mistake in the name of the barista (the cool word used in America to refer to the men and women that work at Starbucks and other expensive coffee shops).

“Next time I will wait for cops and bring a medical exemption,” she warned.

Her post quickly went viral, but not in the way Amber expected. Hundreds of people started commenting and branding her as everything from ill-mannered or rude, to senseless and racist.

Thus, poor Amber Lynn rapidly became the target of numerous online attacks. And she was baptized with a nickname that spreads terror among middle-aged white blonde American women: Amber Lynn became the new “Karen” of the American popular mythology.

But, what is a Karen? Americans have a funny habit of creating neologisms all the time. And, in the era of Black Lives Matter, struggles against racism or police forces, and fierce ideological clashes, new words and phrases are commonplace.

According to the top definition in Urban Dictionary, the modern American slang dictionary, Karen is “the stereotypical name associated with rude, obnoxious and insufferable middle aged white women.”

A woman who, faced with an employee that shows little respect (according to her) or indifference for her requests, immediately says, “I want to speak with the manager!”

The origin of the nickname is unclear, but it is firmly established as the name for the stereotypical white woman that – according to critics – looks down upon everyone else, especially if they are African American, Latino or “white trash,” and acts with an air of superiority, only because of her social and racial belonging.

It seems like the prehistory of the concept of Karen dates back to the 2004 movie Mean Girls and the so-named character played in the movie by actress Amanda Seyfried, which was very close to the stereotype of the insufferable white women, albeit younger.

The current Karen is generally in her 40s and has a bob hairstyle – short, straight and with a side bang.

In the last years, this notion became a meme and cases of new Karens emerge regularly, such as the woman who was taking her dog for a walk in Central Park last May when an African American man approached her to ask her politely to put it on a leash.

The woman didn’t answer him. Instead, she loudly announced that she would call the police and tell them that there was “an African American man threatening [her] life.”

Unfortunately for her, there was another woman nearby who recorded the situation with her phone and swiftly uploaded it to Twitter. In a few hours, a new Karen had been born.*

Racism or justice. Obviously, the nickname is rejected by the part of society that fits the notion of a Karen and by the mass media that tunes it in such as Fox News. Some think it is simply reverse racism.

However, some specialists consulted by our publication considered that the nickname hides some justice.

“I do not think that labeling people as ‘Karen’ affects racial relationships in any way,” says professor Kyle Ratner from the Psychological and Brain Sciences Department of the University of California, Santa Barbara.**

“By labeling something you are calling attention to the matter and, in this case, attention is drawn to the fact that there are many people that call the police with no real reason and exercising a power bestowed by an unequal social structure,”** adds Ratner.

And he concludes by saying that “it is wrong and it is important to highlight it.”**

Stephanie N. Whitehead, associate professor of criminal justice at Indiana University East is on the same page. In an email interview with our publication, Whitehead says that, in her opinion, using the nickname is not “fighting racism with more racism.”**

“I think that it comes from a very legitimate concern with white privilege and it serves as an easy way to identify and highlight it,”** says Whitehead.

Yes, it may seem like there is no mercy for white, blonde, American women of a certain age and social stratum, but the truth is that being a minority in the United States is not easy.

Numerous polls and surveys show that – except for noteworthy exceptions – skin color often equals fewer opportunities in regards to education, economic growth or living in a “nice” neighborhood; but increases chances of being involved in violence or being imprisoned.

For example, a study carried out by well-known professor Charles Stewart III from the prestigious Massachusetts Institute of Technology, showed that Black people have to wait longer than white people when they go to vote.

For many different reasons, including the controversial tracing of voting districts according to demographic factors such as race and income, in the 2012 election in which President Barack Obama was reelected, it took Black people 23 minutes to vote and Latinos 19, while white people only 12.

This is not an attempt to justify the public lynching of poor Karens, but these figures help to understand the racial conflicts in America a little bit more.

Moreover, recalls Whitehead, this racial labeling fest is not new in America. There have always been “famous cases of white women blaming Black people for many different things.”**

“In the years of slavery, there was a myth of Black men raping white women and a high number of false accusations arising from the hypersexualization of Black men,”** adds professor Whitehead. (And it is hard not to think of “To Kill a Mockingbird,” a book later made into a film, which tells the iconic story of a Black man accused of raping a white woman in the years of the Great Depression.)

Of course, Karen is not the only nickname or neologism in style in the ongoing racial or ideological battle in America. In fact, those that denounce “white privilege” are often pejoratively labeled as “SJW” or “woke.”

A woke person is someone that woke up and started clearly seeing the injustices of modern society. It may have had a good connotation for sensible people in its origins, but now it is used contemptuously.

Looking again in Urban Dictionary, woke is defined as “the act of being very pretentious about how much you care about a social issue.” An example of this would be the people that go through the trouble of regularly documenting every Karen they can.

SJW is an acronym that stands for “social justice warrior” and has a meaning that is very similar to that of woke. It may have been considered a praise in the past, but is now one of the favorite “insults” habitually used by Fox News anchors or, further to the right, websites such as Breitbart News and Info Wars, to refer to feminists and socialists.

Another interesting entry is “cancel culture,” a term used to refer to massive collective actions that aim to boycott, shame and (being redundant) cancel, on social and mass media, people that are accused of racism or sexual crimes, even before a fair and impartial process of justice finds whether those crimes were actually committed.

And, finally, a term that could be sarcastic, or even funny, if it did not refer to such sad matters; “Oppression Olympics” is used to talk about the competition among minorities in order to determine which has suffered racism and discrimination the most.

“Given the overwhelming amount of information and the number of people we are exposed to, it makes sense that we need labels to identify behavior patterns,” says Whitehead, “I am not sure that we ‘need’ these labels, but they make it easier to talk about discrimination and racism.”**

After all, since the dawn of history, “our minds try to simplify the world in order to be more efficient when trying to understand what surrounds us,”** sums up Ratner.

And if you don’t like what is written in this article, go and speak with the manager.

*Editor’s Note: The video in question was filmed by the African American man, Christian Cooper, and uploaded to social media by both him and his sister. (SEE HERE)

**Editor’s note: Although accurately translated, the quoted remark could not be independently verified.