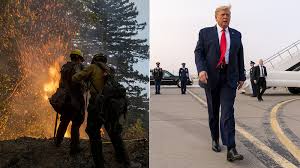 The president isn’t concerned about the wildfires in California; instead he praises his policies, the consequences of which are causing more people to die.

The American West is burning. We have never seen such enormous fires before. In California, Oregon and Washington, an area the size of the Rhineland-Palatinate has already been reduced to ashes. And wildfire season has just begun.

It is obvious to almost every expert. Global warming contributes significantly to this crisis. The governors of the affected states have been nearly desperate in their appeal that President Donald Trump acknowledge the contribution of global warming and finally take action to protect the environment. “What we’re experiencing right here is coming to communities all across the United States of America unless we get our act together on climate change,” California Gov. Gavin Newsom said. Other states face dealing with similar dramatic circumstances.

And Trump? What does he care? He blames forest management for the catastrophe. He praises the United States’ withdrawal from the Paris climate agreement. His COVID-19 policy that refutes scientific fact has cost many people their lives. Climate change threatens the same result, only it is on a time delay.