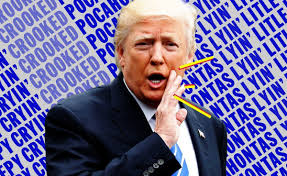 President Donald Trump often bullies his opponents on social media, giving them derogatory nicknames such as “Sleepy Joe,” or using hostile terms such as “losers,” “liars,” and “suckers.” But the spell turned on the sorcerer last week.

The Atlantic reported that in 2018, Trump refused to visit a cemetery in Paris where Americans who died in World War I are buried. According to the article, the president canceled the visit because he considered them “losers” and “suckers.” At the time, the president blamed bad weather.

The magazine reported that Trump insulted Republican Sen. John McCain when McCain died in August 2018, and became furious when he saw American flags at the White House lowered to half-staff, saying he would not honor McCain because the “guy was a fucking loser.” McCain, the defeated candidate in the 2008 presidential election, was a Navy pilot who was captured during the Vietnam War.

In the middle of the current election campaign, the report had terrible repercussions in a country where soldiers are idolized for their sacrifices in war. The article forced Trump to provide interviews Thursday and Friday denying that he had disparaged fallen soldiers. “They’re heroes,” the president said.

Reminded that he had called McCain a “loser,” Trump’s first reaction was to deny it on Twitter. But he had disparaged McCain in an interview in 2015, during his presidential campaign in the 2016 election.

Asked whether it was appropriate to call a former presidential candidate who had been a “war hero” and held captive 5 1/2 years, a “dummy,” Trump said, “He’s not a war hero. He’s a war hero because he was captured. I like people that weren’t captured.” He added, “I never liked him after … (he lost the 2008 election to Barack Obama), because I don’t like losers.”

Trump has an abundant history of making verbal assaults made over social media. The main target has been Democratic presidential candidate Joe Biden. “Sleepy Joe” is the nickname the Republican president uses most frequently, but the president also refers to his opponent as “Slow Joe” or “Joe Hiden.”

Sen. Elizabeth Warren, who ran for president, became “Pocahontas” because she said that she had Native American ancestry. Pocahontas is a Native American who married a British colonist in the 17th century. Her real name was Matoaka. Pocahontas, a nickname, means “ill-behaved child.” Pocahontas became an American legend and the basis of a Disney movie. Trump also associated Warren with another Disney character, Goofy.

He does not leave the press far behind. He classifies CNN as “Fake News” or “Low Ratings CNN.” The president usually refers to the press in general as the “Fake News Media.”

TV news anchor Chris Cuomo, brother of New York Gov. Andrew Cuomo, is one of Trump’s favorite targets. The president calls him “Fredo,” a character from Mario Puzo’s most famous book, which inspired one of the greatest trilogies in the history of cinema, “The Godfather.”

Fredo is the brother who betrays Michael Corleone, and orders him to be killed after pretending to forgive him. Trump hints at his bigotry when he associates Italians with mobsters, branding Chris Cuomo, who criticizes him harshly on CNN, as the New York governor’s weak brother.

The New York Times was dubbed by Trump the “… Corrupt@ nytimes.” Trump played with words in describing the TV program “Meet the Press,” calling it “Meet the Depressed.”

During the pandemic, the coronavirus and COVID-19 appear in presidential speeches as the “Chinese virus” or the “kung flu,” expressions that provoke prejudice against Asian Americans. By outsourcing responsibility to China, Trump is seeking a scapegoat for his inept response to the outbreak.

His opponents have invented their own character to mock the president. Protests against the president feature the regular appearance of “Baby Trump,” a balloon that wears a diaper and looks like a spoiled child.

But the person who gave Trump the most elegant and accurate nickname was former first lady Michelle Obama. In her speech at the Democratic National Convention last month, she called the Republican leader the “wrong president.” Trump was upset, but, to this day, he still has not found a nickname to bully Michelle.