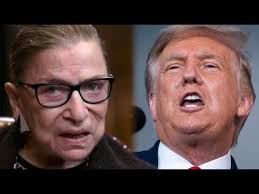 Her death gives Trump the chance to name a successor, a conservative who will tip the court in favor of the right.

A month and a half until the presidential election in the United States, the eve of the homestretch toward the first Tuesday of November, and Donald Trump is at a disadvantage. Last week was another complicated one for Trump. He began by having to defend himself against the remains of the scandal that resulted from statements he made to Bob Woodward, which revealed the extent to which he downplayed the pandemic for political purposes. Later, perhaps intending to repair the damage to his presidential prestige, or simply to change the subject, someone in the White House thought it would be a good idea to take Trump to Pennsylvania to participate in an event with uncommitted voters, moderated by ABC journalist, George Stephanopoulos. The result couldn’t have been worse. Trump failed to acknowledge that he had publicly dismissed the pandemic, or any other mistakes; he insisted that he had done a good job and had responded adequately to the challenge that has now cost the lives of 200,000 Americans.

Throughout the 1 1/2 hours, those in charge of verifying Trump’s statements discovered, as usual, lie after lie, and some strange remarks, like his accusation that the Democrats didn’t impose a mandate for the use of masks. (Needless to say, he is the president, not Joe Biden or any other Democrat.) As predicted, Trump’s performance drew media attention for a few news cycles, compelling the president to defend and justify himself.

So, after another difficult encounter with the world of reporters and indignant voters, Trump seemed destined to lose another round out of the few remaining in the fight for the election.

And then came his chance.

Last Friday, Supreme Court Justice Ruth Bader Ginsburg died. A celebrated bastion of the liberal wing of the Supreme Court, Ginsburg died following a long battle with cancer. Her death could drastically change the course of the campaign because it gives Trump the opportunity to name a successor, undoubtedly a conservative who would tip the high court in favor of the right for at least a generation, with huge consequences for American society.* The problem for Trump is that Ginsburg’s death comes less than 50 days before the vote, and the nomination of her replacement may be badly received by as yet undecided constituents (although very few of these remain, according to recent polls). Consequently, if the Republicans proceed to nominate a replacement to fill Ginsburg’s seat, they’ll be violating the precedent that they themselves imposed four years ago when they refused to even consider Judge Merrick Garland, put forward by Barack Obama, to replace conservative titan Antonin Scalia. Republican leaders argued that Obama shouldn’t look for Scalia’s replacement during an election year. If they decide to ignore their own rule today, they’ll violate not only a minimal level of decorum, but the most basic principle of equity. Most likely they don’t give a damn. We’ll see what they decide and what consequences they’ll face.

The coming weeks will be definitive. The presidential and vice presidential debates will begin next week and will take the spotlight. Trump needs to get his story straight, and soon. It’s not easy, especially if he insists on lying and flaunting how petty he is.

Not everything to come will be negative for Trump. The process of finding Ginsburg’s replacement, who is likely to be an ultraconservative figure like Judge Amy Coney Barrett, will allow him to change the subject, removing the pandemic from the center stage of the debate.*

Nor is it impossible that, with his abrasive style, he could, in some way, win the debate, or at least avoid further eroding his chances for reelection. Trump is also likely to try to pull some news out of his sleeve that will almost magically change the course of the election. The most probable news, for example, is that he’ll announce a vaccine at some point in late October. If so, it’s not impossible that part of the electorate would respond favorably and Trump would manage to close the gap.

For now, however, the president of the United States is swimming against the tide toward reelection. And there are only six weeks left. One thing is certain: the end of a presidential campaign awaits us at the height of this horrendous and unpredictable 2020.

*Editor’s note: On Sept. 26, President Trump nominated Amy Coney Barrett to fill Ginsburg’s seat on the Supreme Court. Her nomination is subject to confirmation by the Senate.