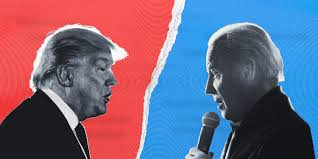 All indications point in favor of the Republicans, although this does not mean the Democrats cannot win. However, it seems that the Democrats are still far from meeting their goals for a victory. Will October given Biden a chance to meet those expectations and win over America? We’ll have to wait and see.

In many ways, the language that dominated the first presidential debate was the intimate relationship between technological development and increasing globalization, as well as the direct influence they have on countries, especially a democratic country like America. The most important revelations of the debate were the competitive language, unity of expression, deterioration of diplomatic shrewdness and the prominent role of emotional outbursts. In truth, the debate only complicated the question of whether the next president will be incumbent President Donald Trump or challenger Joe Biden.

Globalization has played a prominent role in this election cycle. Given the presence of social media and technological advancement, there are not many opportunities left for candidates to discuss their positions. Everyone is already overwhelmed by the information that previously characterized candidate exchanges, so there is not much left for candidates to do but show their strength through attack, defensiveness and interruption, which is exactly what happened in the first debate. It was the first time two American presidential candidates spoke that sharply in a debate broadcast to the world. Their language was unprecedented, and discussion about the lives of the candidates’ families drew the most attention, even thought that means nothing to Americans or the rest of the world.

The most important question is whether the effects of globalization are a realistic indicator of the future of American politics. More precisely, if Biden wins, will he be a president that treads an opposite path than the one Trump has tread? In reality, the type of language that dominated the debate warns of a new side to American politics, since the American people will not accept a slow and bumbling Biden, especially after the last four years of Trump’s administration. Biden could become a Democratic version of Trump, especially since Trump succeeded in dragging Biden onto a different battleground during the debate, one that he could not quickly adapt to. This might be one of the reasons why Biden provoked and verbally lashed out at Trump. Trump succeeded well at ruining Biden’s composure; Trump made Biden speak his language.

The election is unmasking American politics and revealing the extent to which it has changed. Is it a fundamental, ideologically profound change, or is it a natural development that parallels other global trends, especially in technological, cultural, economic and social globalization? Answering this question is difficult and complicated, especially considering America’s declining role in the world. However, we must not assume that decline implies a complete downfall. The world is also changing, people are becoming increasingly aware, the national configuration of countries is growing while people are doing worse within their borders. And we must take care to remember that the collapse of the Soviet Union did away with the notion of global polarization and led to a fundamental change regarding the ideology of diametrically opposed countries. This is so despite the fact that America clings to a policy of promoting competition in a variety of ways, especially economically.

Let’s return to the question of the American election and who will win, but before we do, let’s ask whether a Democratic victory can really result in completely overturning Trump politics. There are no signs of that happening, especially considering that Biden’s running mate, Kamala Harris, shares many personality traits with Trump, a man who has imposed a different culture on American politics over the last four years and won over many Americans, especially white Americans. Additionally, there is no sign that the American deep state wants to discontinue the path it is currently on, especially with the shifting global balance of power and the rise of many international forces in addition to China.

When we think about who will win, we must look beyond the candidates themselves and focus directly on the changes both within America and globally. I believe Biden’s only chance at victory lies not in being the opposite of Trump, but in competing with Trump at his own game. It will not be easy for American culture, especially American political culture, to return to the way it was before, as many analysts believe. Because it is impossible for Biden to return America to the Barack Obama era, all indications point in favor of the Republicans, although this does not mean the Democrats cannot win. However, it seems that the Democrats are still far from meeting their goals for a victory. Will October given Biden a chance to meet those expectations and win over America? We’ll have to wait and see.