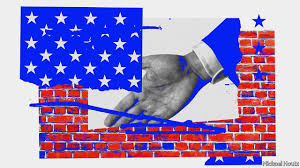 The presidential election and COVID-19 crisis currently dominate media coverage. It is unavoidable, but despite this fact, and precisely because of it, it is increasingly important to pay attention to a phenomenon that is currently occurring in the U.S., one that is unique to the U.S. as a democratic country.

The City and State Diplomacy Act

The City and State Diplomacy Act was introduced in the House of Representatives at the end of June 2019 by Rep. Ted Lieu, a Democrat from California, and Rep. Joe Wilson, a Republican from South Carolina. Lieu is a Taiwanese American, having left Taiwan with his parents at the age of three, entering politics after serving in the U.S. Air Force. The bill passed in December 2019, and has since been introduced in the Senate.

The bill provides that the participation of nonfederal actors in issues of diplomacy and national security is essential in the U.S. today, and notes that we are living in an era of partnerships between leaders in lesser positions of power, rather than simply at a national level. The bill aims to establish the Department of State as the entity in charge of this subnational diplomacy.

The proponents of the bill cite the desire of foreign allies and partners to work more closely with U.S. governors and mayors to deal with issues such as trade, human rights and climate change.

While we do not yet know when the bill will become law, I think this is a novel approach. Traditionally, diplomacy has been for the exclusive use of the nation state, and even under the U.S. Constitution, it falls within the remit of the federal government.

The COVID-19 crisis will lead to a retreat of globalism and multilateralism around the world, and will reaffirm the foundations of national sovereignty within international society.

That said, there is an opportunity to expand the role of diplomacy within sovereign nations to nonfederal actors serving outside state government in order to respond to the demands of the time. This is especially true in the U.S., which provides robust state rights.

Los Angeles Mayor Eric Garcetti, a Democrat, is a key supporter of Lieu and his bill. Garcetti has visited Japan and is said to be a Japanophile. At a meeting held by a think tank in September, Garcetti noted that Tokyo, New York and Los Angeles are the world’s top cities in terms of gross domestic product, and if classified as countries, would be within the top 15 nations.

When it came to implementing strategies to combat the COVID-19 crisis, Los Angeles was able to exchange information directly with Milan, which led to a much faster response than waiting for the outcome of discussions between the federal government and its Italian counterparts.

It is worth noting, however, that while diplomacy covers many areas, issues of national defense and security should remain the responsibility of the federal government.

In recent years, it has not been uncommon to hear about China’s efforts to undermine various countries with which Taiwan has diplomatic relations, in an effort to isolate Taiwan on the international stage. China has also refused to allow Taiwan to become a member (or even observer) of international organizations such as the World Health Organization. Taiwan has noted the critical danger it faces with having its already limited international standing narrowed even further. Taiwan is also unlikely to become a member of the United Nations any time soon for a number of reasons. This is the undeniable truth of the situation.

I don’t know enough to speak about Taiwan in much detail. That said, although a country’s international standing has traditionally referred to the diplomatic relations between countries, I feel that this way of thinking may well be about to change considerably.

As the concept of military power has changed from the traditional image of personnel and equipment based on land, sea and air to include technological developments such as cyber, artificial intelligence and electromagnetic waves, the importance and distinction between official government relationships and nongovernmental working relationships will be similarly reevaluated.

When did the phrase “the decline of America” become cliché?

While there may be many trends within the U.S. that could not be seen years ago, even now, American culture is alive and well around the world.

With this bill, the U.S. could break through walls of tradition to allow one country to consult with another beyond the national level. For example, it would allow the prominent states of California and Texas (which would be listed among the top 10 countries by GDP if classed as nations) to discuss issues on a national level, with these discussions becoming part of the diplomatic efforts of the Department of State (and also the federal government).

If the City and State Diplomacy Act becomes law, it could pave the way for new international law. I believe this uniquely American idea deserves our attention.