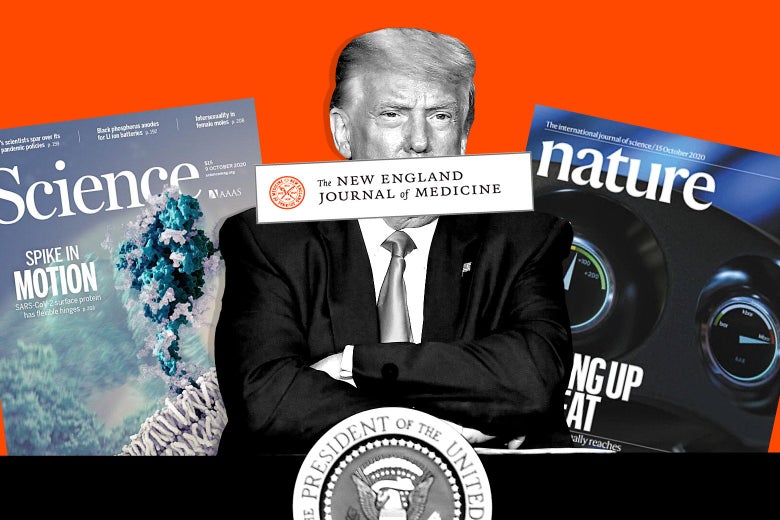 Imagine two public health experts criticizing the Canadian Legault government’s management of the COVID-19 pandemic on television. The first is wearing a classic suit. The second is wearing a red tie and a pin from the Quebec Liberal Party on his jacket.

Which criticisms are you going to give the most credibility to? Yeah, us too.

This is why the reaction of certain scientific institutions to the American election is worrisome. Prestigious, American scientific publications broke tradition and gave their support to the Democratic Party.

Donald Trump, everyone knows, was obnoxious and contemptuous towards scientists. He trifled with the climate, affirming that it would “start getting cooler.” He torpedoed the scientific capacities of regulatory bureaus and named a climate skeptic as the top environmental adviser. He politicized COVID-19 research and personally violated the public health measures in place to fight against the virus, with the consequences of which everyone is aware.

Basically, he attacked science and its institutions like no other president has ever done before.

That is why, now, with the presidential election on the horizon, certain scientific institutions are counterattacking. This week, the prestigious journal Nature officially gave its support to Joe Biden in an editorial. This is not the first time Nature has taken such a position; it supported Hillary Clinton and Barack Obama as well. But this time, it’s a movement.

The New England Journal of Medicine incited voters to show the door to the current administration, taking a position during an election for the first time in 208 years. Scientific American, a legendary popular science journal, trampled on its long-standing principles of 175 years to endorse the Democrats on the way to the White House.

These people have a million reasons to be angry. But by sticking a big blue Democrat button on their jacket, they are making a mistake. In a society that is already much too polarized, they have chosen a side.

More dangerous—by association, and through their prestige, these journals risk causing the blue-hued painting from which they come to bleed into the scientific articles that they publish and even into science as a whole. This would obviously be unjust. People of good faith know that the editorial line of a publication does not implicate all of its contents.

But not everyone is of good faith. It must also be said that scientific journals play a different role in mass media, which take political positions in their editorials. A backing of the Democrats by scientific publications, in its entirety, would run a real risk, resulting in science being painted as a leftist entity – a catastrophic perception. Do you really think that Trump, if he is reelected, would hesitate to declare that an article on climate change published in Nature is biased because it comes from a Democratic journal?

Is this to say that scientists must remain in their ivory towers and restrain themselves from reacting when science and its founding principles are attacked? Not at all.

They have the right to react. They can and must unveil the lies, reestablish the facts, defend the research funds, and fight so that political decisions are based on convincing data.

In short, scientists must get involved in the political sphere, especially when the stakes, like a global pandemic or climate change, threaten our societies and necessitate their perspectives.

But politics and partisanship must not be confused. An example of such confusion is found in the journal Science, which rivals Nature in prestige. Science is published by an association of scientists and cannot take position in the name of its 120,000 members. That did not impede it, over the course of the last few months, from publishing editorials criticizing Trump and his politics. But without ever backing the Democrats.

The nuance between Science’s criticisms and the position taken by Nature may appear symbolic. Why, when analyzing the candidates’ platforms, couldn’t editors of well-known journals state which of the platforms is better in their eyes? Basically, it’s because symbols count. There is a reason why a journal like the New England Journal of Medicine resisted the temptation of meddling in politics for 207 years: it did not want to put a badge on its jacket. By renouncing this tradition, it is playing Trump’s game and jumping into the arena with him. It doesn’t have much to gain, but it has a lot to lose.

Not wearing a political badge is neither a lack of engagement nor a sign of weakness. It’s quite the opposite: it gives all the liberty and credibility necessary for criticizing and defending reason.