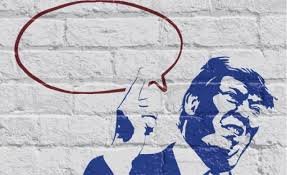 The “truth decay” that has marked Donald Trump’s presidency will not disappear overnight with the changing of the guard at the White House.

In interviews for the launch of his new book, Barack Obama does not miss the opportunity to lament the storm of disinformation that has flooded the United States over the last four years, a phenomenon that existed before Donald Trump, disinformation that Trump has liberally fueled and that, the ex-president fears, will live on after him.

Trump’s principal legacy will perhaps be the normalization of lying, as well as the war against the “enemies of the people” who, in his eyes, are mainstream journalists. It began with his first press conference as president, when Trump pointed an accusatory finger at a CNN journalist and said, “You are fake news.”

Then there was the debate over attendance numbers at his inauguration. Using “alternative facts” presented by Trump adviser Kellyanne Conway, Trump maintained there were indeed crowds of people where photos revealed just the opposite. The rest of his term followed suit, all the way up to the surreal dispute over the results of the 2020 presidential election, a dispute firmly rooted in Trump’s fictional reality.

For journalists, covering Trump represented an insurmountable challenge. Jay Rosen, professor of journalism at New York University, summarized the task this way: “If nothing the president says can be trusted, reporting what the president says becomes absurd.”

But can the media ignore their own president? Impossible. Consequently, what does a reporter choose from the lava that flows from Trump’s Twitter feed? The sacred notion of objectivity has taken a hit. Reporting divergent points of view works when interlocutors act in good faith. But what do you do with a pathological liar?

Since 2018, The Washington Post has reported Trump’s false statements as lies, and kept count of his misleading claims. The list, to date, numbers 25,000. Newspapers have reacted with a massive investment in fact-checking. But again, there is a contradiction, notes Matthew T. Hall, president of the Society of Professional Journalists and editorial and opinion editor at The San Diego Union Tribune. “By documenting a lie, we continue to spread it,” asserted the journalist, who made the decision to disconnect from Trump’s Twitter feed early in 2017. “It is there, on social media, that the alternative reality of the liar-in-chief has been able to spread its wings.”* And it is only during the last election campaign that the big social media companies have finally distanced themselves from the avalanche of falsehoods pouring from the president’s accounts.

One of Trump’s coups de force will be his success at dominating media coverage, and his ability to impose subjects of his choosing by drowning the media in a constant flow of information. “The media’s response to the Trump presidency has been marked by an obsession with Trump,” the Columbia Journalism Review reported in a recent analysis.

These four years of lies have left a mark, and they have deepened mistrust in mainstream media. It is a distrust on which Trump leans, today, in his attempt to convince his base that he indeed won the election. Even if his attempts to contest the election results crash one by one, 70% of Republican voters continue to believe that the Nov. 3 election was unfair to him.

And here lies the result of four years of assault on the media, journalists and the truth. It will take some time to mend the rift.

About Reg Moss 42 Articles
Reg is a writer, teacher and translator with an interest in social issues especially as pertains to education and matters of race, class, gender, immigrant status, etc. He is currently based in Chicago.