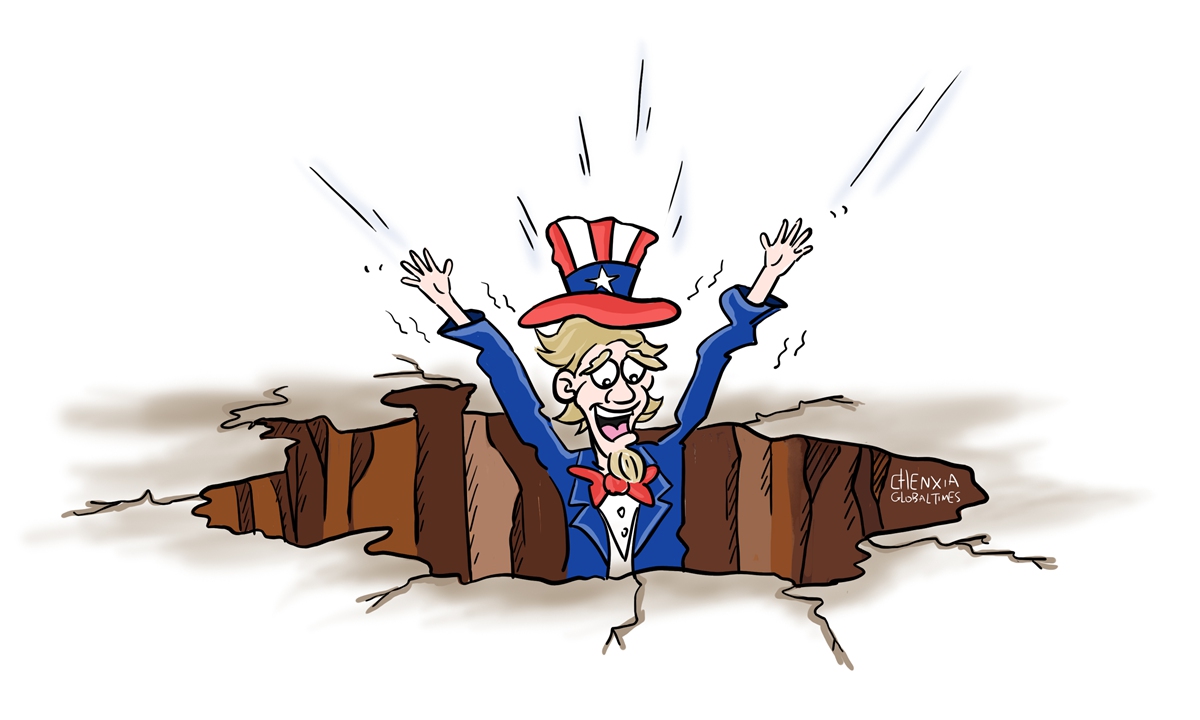 The 2020 election is seen as one of the most bitter and divisive elections in U.S. history, and its anomalies and gridlock reflect the chaos of the U.S. government’s governance for the past four years, or even longer. Widening political rifts, an out-of-control COVID-19 pandemic and unbalanced economic development are just the main manifestations of the chaos in governance.

The chaos of governance in the U.S. government is shown first and foremost by widening political rifts. Twenty days have passed since Election Day in the U.S. on Nov. 3. U.S. General Services Administration head Emily Murphy notified former Vice President Joe Biden and his team on Nov. 23 that Republican incumbent President Donald Trump’s administration was ready to formally begin the transition process. Trump confirmed the news on social media that evening, while saying he would continue to fight to challenge the election results.

Trump supporters recently held a march in Washington, D.C., and clashed with opponents over the controversy surrounding the election. One Trump supporter and two police officers were injured and at least 20 people were arrested.

The widening political rift in the U.S. is also reflected in the ongoing political battles in the executive, legislative and judicial branches. In the midst of a nationwide wave of protests and demonstrations earlier this year over the violent death of George Floyd — an African American man — at the hands of the police, the two parties were divided over how to respond to the situation. It was difficult to get a coronavirus bailout plan passed by Congress because of large bipartisan differences. Trump’s nomination of conservative judge Amy Coney Barrett to the U.S. Supreme Court also sparked fierce political fights between the parties.

The COVID-19 Pandemic Is out of Control

This year’s election was held against the backdrop of a large-scale outbreak of COVID-19 in the United States, where the pandemic has been out of control for a long time. This runaway pandemic has not only profoundly reshaped the election process, but has also become another example of the chaos in the U.S. government’s governance. According to data from Johns Hopkins University, as of the evening of Nov. 22 (Eastern Standard Time), more than 12 million people in the United States have been diagnosed with COVID-19 and more than 250,000 have lost their lives. According to the U.S. Centers for Disease Control and Prevention, since November the number of confirmed cases in a single day in the U.S. has continued to increase sharply to more than 100,000, with a record high of 192,673 on Nov. 20.

It is worth noting that the issue of racial inequality in the U.S. has once again become prominent during the COVID-19 pandemic. African Americans, Latinos and other minority groups account for a higher proportion of the persistently high numbers of confirmed cases, hospitalizations and deaths compared to whites. According to the data, diagnoses, hospitalizations and deaths of African Americans are 2.6, 4.7 and 2.1 times those of white people, while the respective figures for Latinos are 2.8 times, 4.6 times and 1.1 times those of the white population.

The pandemic’s impact on ethnic minorities goes far beyond this. From an economic point of view, the unbalanced development of underprivileged people in America, including some ethnic minorities, is the third manifestation of the chaos of the U.S. government’s governance. Taking the employment situation as an example, the October unemployment figures from the U.S. Department of Labor show that the U.S. job market remains vulnerable to the effects of the COVID-19 pandemic, which has left more minority Americans “unable to breathe” under the weight of the outbreak. The figures show that the unemployment rates for different ethnic groups, such as African Americans, Latinos and whites, are 10.8%, 8.8% and 6% respectively. Congress has been slow to agree on a new round of a fiscal stimulus package, which has greatly restricted the flow of funds to the unemployed and small businesses affected by the pandemic. Prospects for a balanced recovery in the employment market continue to be gloomy.

Experts believe that the pandemic has exacerbated the existential crisis of American people at the bottom of society, but that the long-standing and worsening crisis for the middle class, caused by an unequal distribution of wealth in U.S. society, is causing social and political unrest. Chris Buskirk, editor of the American conservative website American Greatness, points out that the unequal distribution of wealth is caused by nearly half a century of stagnant real wage growth as well as other structural problems, and is likely to create an unsustainable situation.