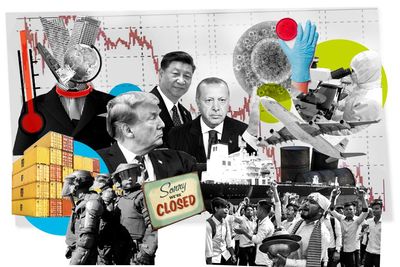 As an old-fashioned professional politician who became president late in life by trying his luck, President-elect Joe Biden has been doing many things well since his election, and for the time being, confounding the skeptics who saw nothing in him but consensus-driven insignificance and spineless centrism. He is being commended for having succeeded at driving President Donald Trump from the White House via the ballot box, a feat whose difficulty was underestimated. But Biden, who comes to power in a context by all accounts unprecedented, is well aware that there will be no honeymoon for him, as he is very much expected to stumble, both by Republican voters and those who placed their trust in him, with respect to confronting the economic and health emergencies the coronavirus pandemic presents and, no less acutely, the social ills brought to the fore by the emergence of Trumpism.

As he began to form his government last week, it was understood that Biden was going to break from the grossly transactional and unilateral diplomacy Trump established in international relations and become the hero of a return to multilateralism and collaboration with America’s traditional allies. One can’t help but breathe easier. But beyond that, Biden evokes an idealistic multilateralism that, moreover, contradicts his declaration that “America is back,” ready to assume a leadership role. But the world needs a return to the status quo less than it needs a revamped, demilitarized American foreign policy.

By and large, the initial batch of Cabinet members Biden named last week, many from the Barack Obama years, demonstrate not so much change for the future but continuity. It is in the economic sphere that Biden seems to show a stronger willingness to turn things upside down, judging by the progressive advisers he is surrounding himself with to tackle the catastrophic inequalities that make up the United States. In the pandemic short-term, a Biden government will do what Prime Minister Justin Trudeau did in Canada and spend tirelessly to shore up the job market and expand the social safety net. There is nothing else he can do apart from pout over the matter as Trump did.

To speak about an “Avengers” team of 1960s-type superheroes is perhaps an exaggeration, but the fact remains that Biden’s economic team not only breaks from Trump, but also distances itself, leftward, from that of former President Obama who, with his inspired words, ultimately navigated a borderline conservative, centrist economic plan, and not without indulging Wall Street.

So here we have Janet Yellen for Treasury secretary; Cecilia Rouse as chair of the Council of Economic Advisers; and Neera Tanden as director of the powerful Office of Management and Budget. These three agencies, part of the President’s Executive Office, are at the heart of power. And here are three women who have focused on defending the rights of workers, greater fiscal justice and the reduction of racial and sexual discrimination in the economy. That they will gain influence in a Democratic administration constitutes a major contrast with a Larry Summers, for example, who was an influential player under Presidents Bill Clinton and Obama and a proponent of the bank and financial deregulations that led to the Great Recession of 2008.

Biden recently went so far as to say that unions were going to have “increased power” in his government. Tanden, whom Republicans dislike — something which could complicate her Senate confirmation — has already stated that she considers present inequalities to be the result of “decades of conservative attacks on the rights of workers,” and that “unions are a powerful vehicle to move workers into the middle class.”*

One might have thought they were listening to the Democratic Party of the 1960s in another move backward in time — as though the party’s establishment had finally realized its responsibilities amid the rise of Trump-style populism. That tells us just how much the progressive branch of the party has gained in influence, from the rise of Bernie Sanders in 2016 to the role that grassroots movements played in voter mobilization in 2020. Biden, who is old enough to know what his party has become and to have contributed to it, will continue to arbitrate the conflicts among these differing forces. The Democratic Party is in full realignment, which portends debates that are clearly and fiercely beneficial to American democratic life.

*Editor’s note: Although accurately translated, these remarks could not be independently verified.

About Reg Moss 78 Articles
Reg is a writer, teacher, and translator with an interest in social issues especially as pertains to education and matters of race, class, gender, immigration, etc.