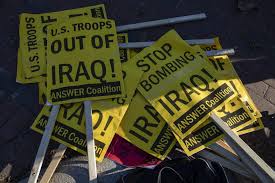 Youth and the politically inexperienced talk constantly in the media about the strategic American ally and its imaginary achievements in Iraq! And should this strategic ally depart from Iraqi soil, Iraqis will die of thirst and starvation; nay, they shall even be deprived of air! They think they can delude and trick the Iraqi people with their lies and falsehoods. The truth about these people is laid bare to the Iraqi people, and what the cancerous American tumor has done is clear to the eye. We remember something of what America has done in Iraq, and how they entangled us in eight years of crushing war with an enormous human cost.

We will remember the oppressive embargo on Iran that has exhausted our country, the support for terrorism and extremism that bred sectarianism, the installation of al-Qaida and later the Islamic State, the complete destruction of our infrastructure, the theft of the country’s cultural heritage, wealth and relics, the martyrdom of hundreds of thousands and the injury and detainment of millions more, the blatant interference in our country’s affairs and the assassination of national Iraqi leadership, the cleansing of officers, scientists and experts, the support of secession initiatives, the imposition of a culture hostile to the Islamic Republic of Iran, the imposition of a culture hostile to the People’s Mobilization Forces, the resistance and those who have sacrificed for Iraq, the complete destruction of the Iraqi economy, the destruction of the country’s agriculture, the founding of multiple organizations that supported its projects in Iraq that are the essence of immorality, such as supporting homosexuals, the opening of what they call massage parlors, but which are actually places of prostitution and fornication, the destruction of the lives of our youth, erasing their Islamic and religious identities, the recruitment of hundreds of our youth, sending them to America for training, then returning them to the country after changing their lives and the values on which they were raised, the disbanding and destruction of the Iraqi army, the opposition to and obstruction of countries that want to invest in Iraqi cities, especially China, and how they force Iraq to forge relations with countries that the United States prefers.

All of the aforementioned points are clear, and the Iraqi people know it. So, what has America achieved in Iraq? Tell us, for we may have falsely and unfairly accused the United States, and maybe the things we have mentioned do not exist. America protects and supports the corrupt, providing them with diplomatic passports and American security. Hundreds of thieves and corrupt people live in America safely and soundly with their families, and America supports them through its media. In fact, it considers them oppressed at the hands of the Shiites and Iran; that is how they are portrayed in American media. If the country does not free itself of America, wreckage, corruption, destruction and terrorism will continue to dominate the land of Iraq. Corrupters and thieves will continue to control the people’s wealth, and the poor will continue to suffer grief after grief. This country has not seen any light since before the British occupation and all the way up to American rule. Our hope is that the noble, patriotic and resisting warriors in my country will end the American occupation and its sins, liberate the Iraqi people’s wealth and save what remains. Liberation of Iraq and Iraqis from American occupation and domination is a national, moral and legal duty. We see the political elite and their position on American occupation, and we ask that they adopt a more steadfast and patriotic position until Iraq is liberated of this poisonous, vile, corrupt and cancerous tumor.