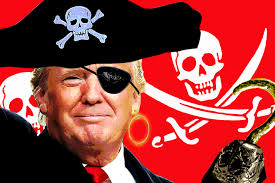 Remember this? These are the words that Joe Biden hurled at Donald Trump in the middle of the first presidential debate at the end of September. Surely we are all hoping for that these days while we listen to the harebrained ideas of the outgoing president and his cheerleaders.

More than a month after the American election, the president continues to conduct himself like the devil in holy water, pretending that he is the winner. He has since insisted that the election was really the “MOST CORRUPT ELECTION IN U.S. HISTORY!” (as he tweeted Sunday).

Oh, and he adds that you haven’t seen anything yet, ladies and gentlemen! Because “WE HAVE JUST BEGUN TO FIGHT!!!” he predicted (in a tweet Saturday).

No matter that the Electoral College confirmed Monday with its vote that Joe Biden has won; Trump will not give it up. Never mind that last week the Supreme Court of the United States rejected a plea by Texas to invalidate the election results in four states that Biden won. Trump is going to continue to pretend that there is proof of “massive fraud” (which he tweeted about Tuesday).

The most troubling thing is that Trump is far from alone in this absurd crusade. No fewer than 126 Republicans in the House of Representatives (out of 196) joined in the lawsuit by Texas to overturn the election results, following the example of attorneys general (Republican ones, of course) in 17 different states.

Here we are again, plunged into this world where people believe alternative facts increasingly more often than they believe reality. A world where Senate Majority Leader Mitch McConnell finally recognized Biden’s win on Tuesday, but where several of his colleagues continue to feed the hallucination that there was an election riddled with fraud.

All of these Republican Party big shots mislead their supporters as often as they galvanize them, which leads to troubled mindsets, violent protest and death threats.

So much so that the conservative elected officials’ little game, which at first was possibly aimed only at not angering the president, looks more and more like a mutiny.

It is the credibility of the electoral process that Trump and his mutineers erode a bit more each day, all while weakening the legitimacy of democratic institutions and Biden’s presidency.

This does not bode well at all for the future of democracy, which lies at the heart of the world’s leading power.

There is, however, no doubt about Biden’s triumph. He brought in the win with 306 electoral votes against Trump’s 232, a result that has just been certified.

Accusations of large-scale fraud do not hold water. Even Attorney General William Barr, an important Trump ally, confirmed the result in the wake of investigations led by his office and the Department of Homeland Security, a dozen or so days before Barr announced … his resignation.

The outgoing president cannot even claim that he received the support of a majority of voters. Biden surpassed him by some 7 million votes. So, the result is indisputable. Yet, the holidays will be ruined as far as American democracy is concerned.

This tragicomedy will not come to an end until Jan. 6, when Congress is to certify the vote of the Electoral College and the election of the president and vice president.

Mutineers have already made known that they will try to derail the process. But they’ll need the consent of both the Senate AND the House of Representatives to do so. The Republicans have the majority in one, but the Democrats control the other.

We can therefore take a bit of comfort: The end is near. But the consequences of this toxic crusade must not be underestimated.