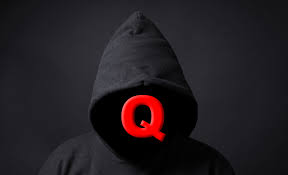 The violent invasion of the Capitol was not terrorism, but rather a precursor to it. In the coming years, radicalized supporters of QAnon will be a great danger to America.

Every terrorism researcher knows that terrorist groups don’t fall from the sky. They form, for the most part, from larger, radical movements that aren’t able to implement their beliefs peacefully.

Since 2017, such a movement has formed in America that has since gained over 1 million supporters — among them citizens, racists, members of citizen militias, fundamentalist Christians and conservative supporters of Donald Trump.

What unites them is not a conventional political ideology, but rather a conspiracy theory according to which America is being governed by a network of satanists and child molesters, against whom Trump is leading a secret war. Its creator is supposedly a government insider who posts messages on the internet and signs them with the letter Q — thus the term QAnon.

What makes the movement dangerous is its total rejection of the political system. For supporters of QAnon, only Trump and his closest allies are legitimate. The rest of the government apparatus consists of enemies of the people with whom compromise is impossible.

They’re Announcing the “Day of Reckoning”

Trump provoked the movement, but reined it in at the same time. As long as he was in office, QAnon supporters could hope that his supposed war against the “deep state” would succeed. Q repeatedly announced a “day of reckoning,” when the president would imprison his opponents and put them on trial.

However, after Trump lost the election, there is no longer a president who is controlling the alleged war from the highest office, meaning this: For the movement’s supporters, there is an entirely new situation.

The violent invasion of the Capitol was a (last) attempt to prevent Joe Biden’s transition to the presidency. The immediate consequence is that moderate conservatives will turn away from QAnon. They don’t want a civil war, and the tragic consequences of the Capitol event — five people lost their lives — have deterred them. As a (mass) movement, QAnon won’t grow in the coming months, but rather shrink.

However, this won’t decrease the danger posed by it; for a minority, it’s now about the big picture. After Jan. 20, there will be no more reason to hold back. Without Trump, the government apparatus will fall completely into the hands of the enemy. The persecution of “American patriots” won’t decrease, but rather increase. Last but not least, with the death of a QAnon supporter from California who was shot during the storming of the Capitol, the movement has their first “martyr,” whose sacrifice must be avenged.

The terrorist threat that arises from this will become greater and more dangerous in the coming years than that of jihadis. There are at least four reasons for this.

First, the movement has more supporters than the Islamic State or al-Qaida. Even if only 1% of 1 million QAnon supporters are prone to violence, that would be 10,000 dangerous individuals. In comparison, the number of jihadis is comparatively small. In the past 20 years, a total of just fewer than 500 people were charged with supporting jihadi groups in America.

Second, QAnon is heavily armed. Many of the movement’s supporters are active in citizen militias. The Second Amendment, which guarantees Americans the right to bear arms, is the most important basic right for them.* On the other hand, nothing is known about jihadi militias. Only a few of the 500 jihadis who stood trial for terrorism had a military education or were considered gun fanatics. Many failed to build functioning explosive devices.

Third, QAnon can count on much wider support in the population. Even if most conservatives were never involved, according to current surveys, 20% of Republicans expressed understanding for the storming of the Capitol. Even in politics there are sympathizers. A dozen Republican lawmakers participated in the riot, multiple legislators defended it on Fox News and the Alabama attorney general helped fund it.

Fourth, QAnon has infiltrated the military and the police. There are still no exact numbers here, but according to various reports there were at least a dozen active soldiers among the rioters at the Capitol. The Seattle police suspended multiple officers for participating in the riot. This is no surprise for experts; they’ve warned for years before this that right-wing extremist groups are actively infiltrating the military and the police.

In addition, while American governments have invested billions of dollars since the 9/11 attacks to combat jihadists, the resources for combating right-wing extremism were massively cut in the past years. The Department of Homeland Security and the FBI are lacking knowledge and personnel to effectively face this new threat.

Therefore, the storming of the Capitol was not an end point, but rather the dramatic kickoff to a massive terrorist threat that will occupy America for years to come.

*Editor’s note: The Second Amendment provides, “A well regulated Militia, being necessary to the security of a free State, the right of the people to keep and bear Arms, shall not be infringed.”

About Michael Stehle 58 Articles
I am a graduate of the University of Maryland with a BA in Linguistics and Germanic Studies. I have a love for language and I find translation to be both an engaging activity as well as an important process for connecting the world.