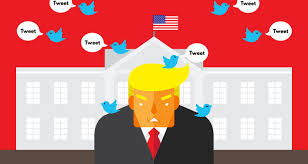 There has been relatively widespread indignation to the suspension of the incumbent American president’s Twitter account, claiming it is censorship and an unprecedented limitation of freedom. Those sentiments were nicely encapsulated by Donald Trump supporter and former U.S. Ambassador to the U.N. Nikki Haley, who said, “Silencing people, not to mention the president of the U.S., is what happens in China not our country. #Unbelievable.” (She wrote that on Twitter, of course.)

This opinion will undoubtedly find plenty of advocates in our country because we are exceptionally sensitive to curtailment of free expression. Moreover, championing the American president gives some people a feeling they are doing something original. But in reality, the constitutional guarantee of free speech at issue here protects companies like Twitter, not Trump.

The celebrated First Amendment to the U.S. Constitution, ratified in December 1791, protects freedom of religion and speech against infringement by the state, but over many years of judicial precedent, it has been interpreted relatively broadly to apply to nongovernmental action against many kinds of expression such as freedom of the press, freedom of assembly, association or the right of petition. It would be considered censorship, therefore, if anyone (including Trump) were not allowed to express his opinion.*

Nothing of the sort happened. It may not seem so at first glance, but it is precisely Twitter that freedom of expression protects. The private company is not required to further disseminate content that, in its opinion, goes against its rules. Citizen Trump entered into a contract with this company by means of the account @realDonaldTrump, he used their services, and Twitter concluded that he violated the terms of his contract.

The incumbent American president was not limited in his exercise of either civic or political rights, no one prevented him from making speeches from the White House press room or the Oval Office, and no one ever took away his access to the nuclear launch codes. It is simply that one private company came to the conclusion that his tweets violated its rules.

Few people realize it, but by installing any kind of commercial software on our computers or phones, we enter into a contract with the provider.

In making an agreement with Facebook we obligate ourselves to adhere to the so-called principals of the community: A user pledges not to incite or glorify violence, to refrain from any sort of hateful speech, including attacks on anyone because of their race, ethnicity, nationality, gender, etc. We cannot post to the network even totally innocuous pictures showing a naked body. Twitter has similar rules which provide, “You may not engage in the targeted harassment of someone, or incite other people to do so. This includes wishing or hoping that someone experiences physical harm.”

Undoubtedly it is a separate debate whether @realDonaldTrump’s tweets indirectly incited violence, or whether, on the other hand, when their author saw that violent people were referring to his tweets, his silence or expression of downright sympathy for those who attacked the Capitol should be interpreted as an indirect support of violence. We won’t get into this legal squabble here. If Trump is convinced that the other side has baselessly violated the mutual contract he had with Twitter, he can argue with them about it. But the next time someone starts telling you about censorship destroying the U.S. and all of Western civilization, you’d be better off changing the subject and talking about the weather. You’ll save yourself lots of aggravation.

*Editor’s note: The First Amendment provides: “Congress shall make no law respecting an establishment of religion, or prohibiting the free exercise thereof; of abridging the freedom of speech, or of the press, or the right of the people to assemble, and to petition the Government for a redress of grievances.”