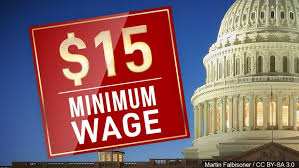 The new U.S. administration wants to drastically raise the minimum wage. However, there is resistance not only from Republicans, but from the administration’s own party.

The frustration led to a chorus of cars honking. Last week in Durham, North Carolina, fast food restaurant workers again sought to draw attention loudly to their situation. They held up huge signs that couldn’t be overlooked as people drove by, signs that read, “Pay us $15 now.” Their message was not just directed at their own employers, but at politics in Washington and at Joe Biden in particular.

In 15 U.S. states, low-income workers are demonstrating for a significant increase to the minimum wage, an increase which the new president promised during his campaign. Now, he’s supposed to finally ensure that millions of Americans are paid better. “It would allow me to have money left from one paycheck to the next, to provide for my family better as far as food, and allow me to get transportation so I won’t have to take the bus,” Ieishia Franceis, who works at a burger chain in Durham, told the Guardian, for instance. Currently she makes $9.20 an hour.

Biden made increasing the minimum wage one of his most important government projects, and he appears to be serious. Just last Tuesday during a town hall on CNN, the 78-year-old president asserted, “No one should work 40 hours a week and live in poverty.” Biden’s planned COVID-19 relief package outlines a graduated increase to a $15 minimum wage by 2025, as worker initiatives have been demanding for years.

That’s because nothing has happened in the United States in terms of the minimum wage for more than a decade. The last increase was passed in 2009 under President George W. Bush. Since then, the federal average for minimum wage has amounted to just $7.25 an hour. For many, given the high cost of living in the United States, this means poverty despite being employed. According to a sample calculation from the left-leaning think tank Center on Budget and Policy Priorities, full-time minimum wage workers earn just $1,256 a month. That amount is so low that with two children, for instance, these workers are still entitled to $482 in food stamps. Thus, the state effectively subsidizes starvation wages.

Furthermore, the purchasing power of the wage floor is sinking. According to calculations from the union-affiliated Economic Policy Institute, the bottom wage was effectively 28.6% lower in 2018 than in 1968 due to inflation. If the minimum wage had risen at the same time that productivity did beginning in 1950, it would currently amount to just under $21. Instead, a considerable part of the U.S. workforce is working for the lowest wages. According to the EPI, more than 38 million people would profit from raising the minimum wage, including an above-average number of women, Black and Latino people.

The fact that so little was done on the lower end of the income scale for so long is mainly the Democrats’ fault. Despite a secure majority in both chambers of Congress during his first two years in office, former President Barack Obama took no initiative to raise the minimum wage for a long time — despite campaign promises to the contrary. Only in 2013, when the Democrats no longer had a majority in the Senate, did he support a general increase to $10.10 an hour, which predictably failed. Instead, Obama issued an executive order only to companies that receive federal contracts mandating they pay at least $10.10 an hour — and ordering them not to discriminate against workers because of their gender or sexual orientation.

An Increase Would Be Extremely Popular

Workers are exerting pressure where the Democrats failed. In 2012, the initiative “Fight for 15” was founded, which has since regularly pushed its demands with strikes and demonstrations. There has been some success. Multiple states and municipalities raised the minimum wage, and the issue has become more urgent with Democrats as well. As one of its first prominent supporters, left-leaning Sen. Bernie Sanders took up the” Fight for 15.” During his presidential race, Sanders campaigned on this issue, while his opponent Hillary Clinton campaigned for only a $12 an hour minimum wage.

An increase to $15 an hour is extremely popular. As early as 2019, just under two-thirds of Americans declared themselves in favor of the increase. On Election Day last November, the citizens of Florida, a state that Donald Trump won, decided by referendum to raise the minimum wage. There is also broad consensus on the issue within the Democratic Party. The majority of presidential candidates got behind the demand in 2020. In 2019, the House of Representatives even passed a law to raise the minimum wage. However, it had no chance due to the Republican majority in the Senate.

Now things are different. The Democrats again hold the majority in both houses of Congress and the presidency; therefore they could finally enact a higher minimum wage law. Biden’s clear commitment to this is one of the few concessions to the left wing of the party that is otherwise, in terms of substance and people, barely represented in the new Congress. There are obstacles, however.

It Will Be Complicated in the Senate

First of all, there are procedural questions. Fifty-one votes are needed to pass a law. In the case of a tie, the Democrats can reach 51 votes if Vice President Kamala Harris votes to break the deadlock. However, the Republicans can block most bills with a filibuster, which can only be blocked with a two-thirds majority of 60 votes. And most Republican senators are against a minimum wage increase. Only a small group of legislators, including former presidential candidate Mitt Romney, have shown any willingness to negotiate.

It is possible to pass a minimum wage increase with only 51 votes through a complicated process known as budget reconciliation. However, to do this, the Democrats would have to prove that the measure would have an effect on budget financing and the national debt, something an internal congressional study supports. Within the next 10 years, the national debt is projected to increase by just under $54 billion due to expected job losses, among other things. Faced with a national debt of already just under $28 trillion, that is a vanishingly small amount, but it could be enough to pass the minimum wage via budget reconciliation.

Resistance from the Economy

If only it weren’t for some stubborn Democratic legislators who will likewise reject an increase to the minimum wage in its proposed form. These legislators pose the second big obstacle. West Virginia Sen. Joe Manchin in particular is blocking the increase, seeking a moderate increase to $11 an hour. That would be enough for the citizens of his state, Manchin said at the beginning of February. And other Senate Democrats as well have made no clear commitment to Biden’s plans so far. If only one Democrat votes against it, the minimum wage increase will have no chance.

And there is significant resistance from the economy. As was the case after the 2009 financial crisis, critics of a minimum wage increase argue that it would be an additional burden for small businesses that are already struggling with economic problems due to the economic crisis. According to a survey conducted by the financial news network CNBC, just under one-third of American small businesses would have to lay off employees if the planned increase went through.

The negative effects on the job market would presumably be tolerable in macroeconomic terms. The current congressional study on the macroeconomic consequences of the Biden plan predicts that the minimum wage increase would cost just under 1.4 million job. In return, however, 900,000 workers would be lifted above the federally defined poverty line. And many states and cities governed by Democrats have already passed several higher minimum wage laws in recent years. Overall, hardly any job losses have been recorded there, as a data analysis published at the end of 2019 at the University of Massachusetts shows from the results in seven states.

The economic effects thus support a minimum wage increase. What’s actually missing is the political will to act. Despite his public commitment to $15 an hour, the new president already assumed a few weeks ago that the change wouldn’t make it into the COVID-19 relief package. “I put it in, but I don’t think it’s going to survive,” Biden told CBS. That doesn’t sound particularly aggressive.

However, for the fast food workers in North Carolina, patience is at an end. “Congress needs to put our money where their mouth is,” Franceis said last Thursday. “We shouldn’t have to wait until next year or the next year. The bill is there. Just pass it and be done with it.”

The draft of the next COVID-19 relief package will presumably be presented and negotiated in detail in mid-March.* Then at the latest, Congress will decide whether workers in the low-wage sector will finally earn more money after decades of stalemate, or whether the political standstill in Washington will once again deliver nothing to the poorest people in the country.

*Editor’s note: On March 6, the Senate approved a COVID-19 relief bill, which will go back to the House of Representatives for approval next week before being sent to President Biden for his signature.