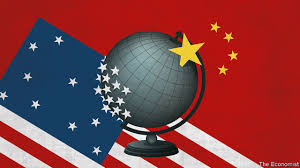 Geopolitical competition between the U.S. and China superpowers enters a new stage.

Profound changes accelerated or created by the pandemic are taking place in the world economy and geopolitics. If it is too early to distinguish all its ramifications, one of them is already clear: a new stage in the competition between the two great powers, the U.S. and China.

In the United States, the huge progress made with the vaccine rollout and the light at the end of the pandemic tunnel is making room for a period of growth and innovation. With the new $1.9 trillion fiscal stimulus, the largest stimulus bill in history, it is believed that the American gross domestic product will grow at least 6% in 2021, the highest rate in decades, making it possible to return to full employment as early as next year.

The experiment has the support of the Federal Reserve, which should keep interest rates very low at least until inflation threatens to exceed 2% per year.

In addition to the oversized stimulus package, the program’s significance stems from an ideological point of view: There will be a serious attempt to combat inequality. Having seen the political consequences of inequality, as with the presidency of Donald Trump, if more opportunities are created, American democracy has a new chance for renewal.

Another focus of Joe Biden’s stimulus program is expanding investment in sustainable technologies and infrastructure, as well as ensuring leadership in crucial areas for the next stage of development, such as artificial intelligence, quantum computing and biotechnology.

Biden also promises to work with allies to reinforce the appeal of Western democracy in the eyes of the world, in order to contain the expansion of Chinese influence.

China, for its part, is not resting. The government has just released its 14th five-year plan, which provides resources for innovation, mastering the same essential technology for the future, strengthening cutting edge industries, and reducing carbon emissions.

China’s focus remains on infrastructure, an area of influence through investment in developing countries. There will also be an effort to internationalize the Chinese currency.

There is growing concern on both sides about the security of supply chains. Export controls for sensitive technologies that may have military use and a guarantee of domestic supply, among others things, will keep the competition fierce.

In common challenges, such as climate change, we can expect cooperation, but geopolitical rivalry should mobilize more of the resources of these two great powers.