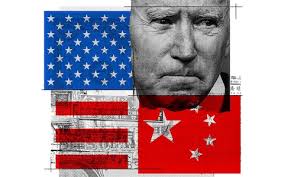 I am not the first to raise the name of the great Greek historian Thucydides in observing and commenting upon the state of U.S.-China relations. Graham T. Allison Jr., researcher and professor emeritus at Harvard University, has in fact published a book on the subject.

While the meeting between Chinese and American representatives is getting underway in Alaska, tensions are such that one senses the need to recall the famous “trap” referred to by Thucydides in his explanation of the conflict between Athens and Sparta. In the fourth century B.C., the historian proposed that one of the major causes of what has been called the Peloponnesian War lay in the fear by an established power, Sparta, of seeing an emerging power, Athens, overtake it.

Are China and the United States heading irrevocably toward armed conflict? Though one cannot brush aside this possibility in the medium or long term, there are still power struggles in the offing and many options on the table. If the verbal attacks to which the two parties gave themselves over yesterday are less than reassuring, we should not be too quick to discern a major escalation or a point of no return.

Donald Trump’s departure partially explains the spectacle we were treated to on Thursday. We are still studying each other a little before drawing up a list of priorities and, if the other party is not unknown to us, we take stock of its resolve and assess the challenges.

If the representatives of the American government have angrily leveled the usual complaints against Chinese leadership, in focusing on the lack of democracy and the disrespect for human rights, this first salvo was essentially emotional. One expects the United States to promote its values and democracy, but I believe that progress can only be made if one adopts a more pragmatic position.

While waiting for a clearer picture to emerge of the strategic issues that the Biden administration prioritizes, one notes that the new president is distinguishing himself from his predecessor by a refusal to isolate his country.

The Asia-Pacific zone is of major importance in the reshuffling of forces. The new American administration is restoring ties in the area with multiple partners such as South Korea, India, Japan and Australia because the United States no longer has the means to assert itself alone.

If the United States finds itself in the position of ancient Sparta, it is as much by reason of the progression and evolution of actors such as China because, more recently, it has abandoned the leading role to which Trump’s predecessors still held fast.

In the coming weeks and months, we will know more about the ability of the Americans to regain a leading role on the international scene, just as we will see a little more clearly into what will become a priority so as to adapt to China’s growth and influence.

Will they know how to avoid Thucydides’ trap? We must hope so, and I believe that they will get there. For better and for worse, the two powers still need each other. They will avoid the worst in the short term, but we won’t be able to settle for this sole perspective. The United States needs a new strategy for the medium and long term, and it lags far behind its main rival.

About Peter Lopatin 12 Articles
After retiring from a 25+ year career in corporate and business law some years ago, I became an ESL teacher, which I continue to do part-time. I am also a published writer of short stories, poetry, essays and book reviews. My love of the French language has been a constant and I have worked to refine my command of French over the years.