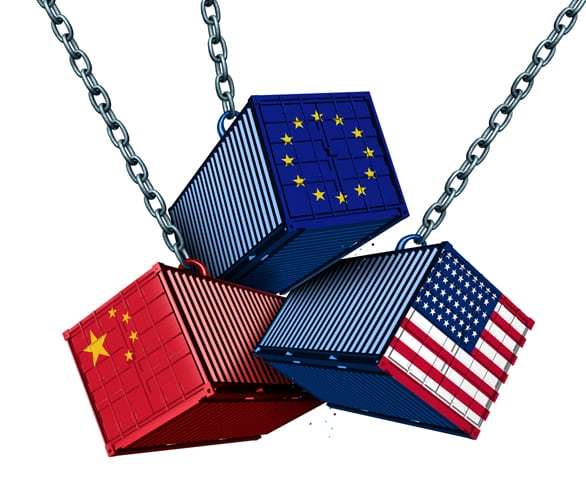 It’s better for us if the U.S. and China go at it alone.

Donald Trump out, Joe Biden in. The U.S. and China are jostling for dominance as superpowers in the 21st century and are not shying away from pursuing ruthless economic means in the process. They are banning exports and corporate investments, and imposing tariffs to protect domestic industries and undermine ties with corporations on the other side. After Huawei, Americans are blacklisting an increasing number of Chinese high-tech corporations, while China kicked out Google and Co. long ago.

In other words, both parties are violating all decent conventions of globalization and stability of the market economy. In addition, they accept that third parties will suffer as a result. European corporations, for example, which want to quietly continue doing business in the middle of this conflict.

The strategic behavior of Washington and Beijing has led some Europeans to think that they should return the favor; for instance, with the recent proposal to ban vaccine exports, as Italy is already doing to an extent. The more general demand behind it is that Europe should make the duel into a three-way fight to avoid being trampled as the giants do battle.

The first point to make is that Europe itself is in no way the choirboy of the global economy. Its tariffs on foreign cars are higher than those in the United States. Agricultural subsidies from Brussels steal business from African farmers. In the fight for vaccines, Europe is suffering not only from the actions of evil foreigners, but also from the consequences of its own stupidity and miserliness. The European Union ordered too little of some vaccines but too much of the wrong one. Above all, it placed its order very late and then took its time approving the vaccines. As a result, other regions are receiving their doses more quickly.

In the long term, the more important point is that strategic tinkering with the economy is expensive. Those who prohibit their corporations from doing business abroad make them poorer; those who protect them from competition weaken them. After all, Europe is not a developing region that needs to create a buffer around its industries that are still trying to establish themselves.

Only historians still remember Europe’s tragic attempt some 30 years ago to establish its own television standards during a conflict with America and Asia. Or how the French wanted to build their own computer industry at all costs. Or the Brits’ attempt to use every means to save their unproductive car manufacturers. But Europe’s industry and technology policy makers should look back today when they demand a European Google or want to establish the direction for developing a greener automobile industry.

The EU as the protector of economic fairness and freedom — that would not be the worst model, relatively speaking. When two parties are fighting, that may become uncomfortable in some situations, and the Europeans should, of course, defend themselves when a Donald Trump threatens them with absurd tariffs or a Xi Jinping uses his investors to secure certain inventions for China. But in general, we need composure. No one, not even China, is better than the market at identifying the true technologies of the future. And those who impose tariffs are first and foremost hampering their own consumers.

Michelle Obama once said, “When they go low, we go high.” We should hold that mantra up to those who are now striking a European-national note.