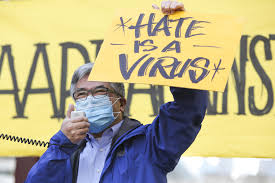 What’s behind the Atlanta killings where seven women were murdered, six of whom were of Asian descent: racism or sexism? Unfortunately, that’s the wrong question.

“Yesterday was a really bad day for him,” the investigator said about the suspect who fatally shot eight people and seriously injured one other person within an hour in Atlanta two days ago. Seven of the victims were women. Six of them were Asian American. The suspect drove to three spas in order to kill these people. The investigator quoted the suspect as saying that the attacks were not racially motivated. According to the suspect, he suffers from a sex addiction and the spas are “a temptation for him that he wanted to eliminate.”

However, in this case, one can’t think about racism and sexism separately. Not wanting to recognize the racism in his statement as such is in fact already a form of racist thinking. That’s because the white suspect drove for miles to three spas where he assumed he would find not just women, but women of Asian descent. He could have chosen a brothel, a porn video store or a strip club as targets, but his hatred was obviously for Asian women. Therefore, one has to view these killings through the lens of intersectionality; that is, multiple discrimination, in order to be able to comprehend the whole issue.

The concept of intersectionality was coined by the African American lawyer Kimberlé Crenshaw. She determined that “the fight against racism must also include the fight against sexism.”* As a law professor at UCLA and Columbia University, she developed her thesis based on the case of Emma DeGraffenreid. In 1976, this DeGraffenreid sued General Motors for sex and race discrimination in their hiring. The suit was rejected because both African Americans and women worked at General Motors. However, these African Americans were mostly active in the industrial and maintenance sectors and additionally were all men. The women were usually employed at the reception desk and as secretaries and were all white. Crenshaw determined that DeGraffenreid was not hired because she was Black or a woman, but rather because she was Black and a woman.

Furthermore, the perversity of making Asian women responsible for the supposed uncontrollability of one’s own sexuality is an ancient misogynous instance of post-colonial exoticism. The shame of one’s own libido is thereby transformed into hatred against the desired person. It is a classic example of victim-blaming.

And not only that: White supremacist narratives, as cultivated by racist killers, primarily function on the idea of the dangerousness of “the other.” The woman as “the other” and non-white people as “the other” intensify in a notion of women of color who must be tamed, civilized or eliminated. The idea, assumed from prejudice, that spas would offer sexual services as a matter of course because Asian American women worked there, is another aspect that rounds off the suspect’s worldview, his sexism and racism.

This degradation is based on a long tradition of objectification, fetishization and hypersexualization of Asian women that runs throughout history and especially through pop culture as well.

In addition to all this hatred between manic chastity and xenophobia, as the young man obviously must have cultivated it, there is presently a climate of anti-Asian racism in the United States — as well as worldwide — that has been strengthened by the pandemic.

Historically, the deliberately racist image of dangerous Chinese and Asian people has been cultivated in the United States since the turn of the century for economic and political reasons. On the one hand, this was done to find a human scapegoat for the plague carried by rats. On the other hand, it came from the hatred that white railroad workers felt when they lost their jobs due to the Depression and had an easy target to blame in the Chinese workers who were cheaper because they were exploited. The government accepted this hatred gratefully; the media fostered it.

In the year 1900 this led, among other things, to state officials setting a fire in the Chinatown district of Honolulu to burn 150,000 square meters of Chinese housing (approximately 1.6 million square feet). In the past few years, the former president of the United States talked about the “China virus” and “Kung flu.” And even in current media coverage, the coronavirus is still occasionally referred to as the “Chinese virus,” perpetuating the legacy of anti-Asian framing intentionally or unintentionally.

Why does it make a difference whether someone talks about the “Chinese virus” or the “British mutation”? People can be perceived as Asian and subsequently discriminated against. It’s hardly possible to perceive someone as purely phenotypically “British” and to discriminate against that person because of it.

In the largest U.S. cities, anti-Asian attacks have risen by 150% since the pandemic. With the hashtag #ichbinkeinVirus, #jesuispasunvirus or #iamnotavirus, Asian people are defending themselves worldwide against this racism. Last May, there was such an accumulation of cases in Germany that the South Korean Embassy issued a warning on its homepage to its compatriots about attacks. It. Had. To. Warn. About. Germany.

Even in the media, such feelings of resentment, from the “yellow danger” to the “red dragon,” are readily dished out — and even Der Spiegel didn’t exactly embrace objectivity as far as the COVID-19 cover pages regarding Asia are concerned.

In Germany, they are still repeating the old bat soup jokes, a South Korean boy band is being compared to a virus, and the racist CCC insult is being used (Google it; I don’t want to spell it out here).

It’s important to keep in mind that self-radicalizing, incel women haters plus a global pandemic that continues to be falsely framed in the media in reference to Asia, represent an acute threat — to women, to people of Asian descent and especially to women of Asian descent. We must not ignore the connection between racism and sexism so that we can better protect people from becoming victims of guys who are just having “a really bad day.”

Editor’s Note: This quote, though accurately translated, could not be independently verified.

About Michael Stehle 52 Articles
I am a graduate of the University of Maryland with a BA in Linguistics and Germanic Studies. I have a love for language and I find translation to be both an engaging activity as well as an important process for connecting the world.