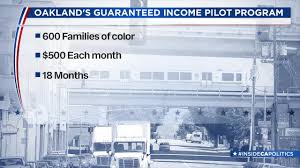 Oakland is a rich city with pockets of deep poverty and contrasts that make Brazil’s pale in comparison.

As in other American cities, the poorest areas are almost exclusively populated by Black people.

Now, the city by the bay, San Francisco, home to Silicon Valley tech fortunes, has an innovative idea: a minimum-income program designed only for families with at least one child under 18 and income below half of the U.S. national average ($59,000).

The program is fully funded by philanthropic donations, which mitigates but does not entirely eliminate a potential constitutional obstacle: It is only for families in the Black, Indigenous and people of color category.

Six hundred families that meet these requirements will receive $500 per month for 1 1/2 years.

“The poverty we all witness today is not a personal failure, it is a systems failure,” said Mayor Libby Schaaf, who is so far to the left on the American spectrum that she created an alert system for U.S. Immigration and Customs Enforcement raids on undocumented immigrants in the city during Donald Trump’s presidency.

It goes without saying that a social program that excludes white people may be considered unconstitutional.

The program is similar to one that is already running in Marin County, the third richest county in the U.S., which pays recipients double, $1,000. It is partially funded with public money.

“The structure of the program is racially discriminatory,” legal analyst Walter Olson told the website Reason.

According to him, even if the funds are privately sourced, county officials’ level of participation in the distribution will matter if there is a legal dispute.

The payouts for Black families may create confusion with another type of grant: race-based reparations.

A Chicago-area county, Evanston, approved a pilot program that will give $25,000 to 16 Black families for home renovations or as a down payment on another property.

An interesting detail is that the initial $400,000 is funded by taxes on legalized marijuana.

The program aims to compensate for discriminatory damages experienced by Black residents with regard to housing.

The money will not go directly to the families, but to the stores that produce and sell building materials or the banks financing the new properties.

That is why it’s being labeled “paternalistic.”

Racial discrimination is only allowed in the U.S. in specific circumstances and for a limited period for university admissions.

Current debates on these pioneering programs will mold future ones and, for obvious reasons, are also of interest to Brazil because of the fundamental questions that they pose: Do disadvantages due to race or color outweigh socioeconomic disadvantages? Where does one end and the other begin? Are reparations for discrimination rooted in slavery or because of specific circumstances a reasonable or desirable way to provide justice?

There are no easy answers.

About Lisa Carrington 47 Articles
Lisa is a freelance translator in English, Spanish and Portuguese. She has a BA in Spanish for Translation and Portuguese and is a Member of the Chartered Institute of Linguists. She is passionate about languages, specifically translation.