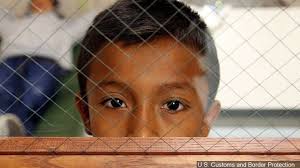 According to a U.S. military source, last Friday, the Department of Defense authorized the use of the National Guard base at Camp Roberts, California, to temporarily house immigrant children unaccompanied by an adult. Yesterday, the Department of Health and Human Services, which is responsible for the custody of most of these minors, confirmed that the use of military camps as emergency shelters is “under active consideration,” but said that the final decision had not been made.

U.S. immigration law permits authorities to expedite the expulsion of adults who enter the country illegally, but it prohibits treating minors in the same way. When they are intercepted by the Customs and Border Patrol or other law enforcement agency, children and adolescents are referred to HHS, and after a lengthy judicial-administrative process, they are placed in the custody of a guardian, often a family member living nearby.

Against this backdrop, thousands of migrant families have adopted the desperate strategy of sending their children across the border alone, with the hope that they can manage to stay in the United States and get together with a relative. In recent weeks, an average of 500 unaccompanied minors have been crossing the border every day. In February, 9,000 such minors were recorded, the highest number for a single month since May 2019.

President Joe Biden, on his sixth day in office, rescinded Donald Trump’s inhumane and illegal “zero tolerance” policy, which resulted in the detention of 600 minors, the whereabouts of whose families are unknown. However, despite this, as of March 30, HHS had 12,918 migrant children in their care, and another 5,285 were being housed by Customs and Border Patrol. On that day, two journalists went inside the CBP facility in Donna, Texas, and noted that 4,100 children were being housed in a space meant for a capacity of 250, a place where the children were sleeping in corrals on mattresses in the dirt. Between 250 and 300 children are admitted to the center every day, but very few are leaving. As a result, the overcrowding continues to get worse.

Rather than setting up military camps where minors who are seeking to be reunited with their families continue to be detained, the United States should expedite the procedure for releasing them. In doing so, the United States should meet the standards of respect for human rights and protection of children that it demands of other countries, in a manner that is, more often than not, arrogant and involves trampling on the sovereignty of other nations.