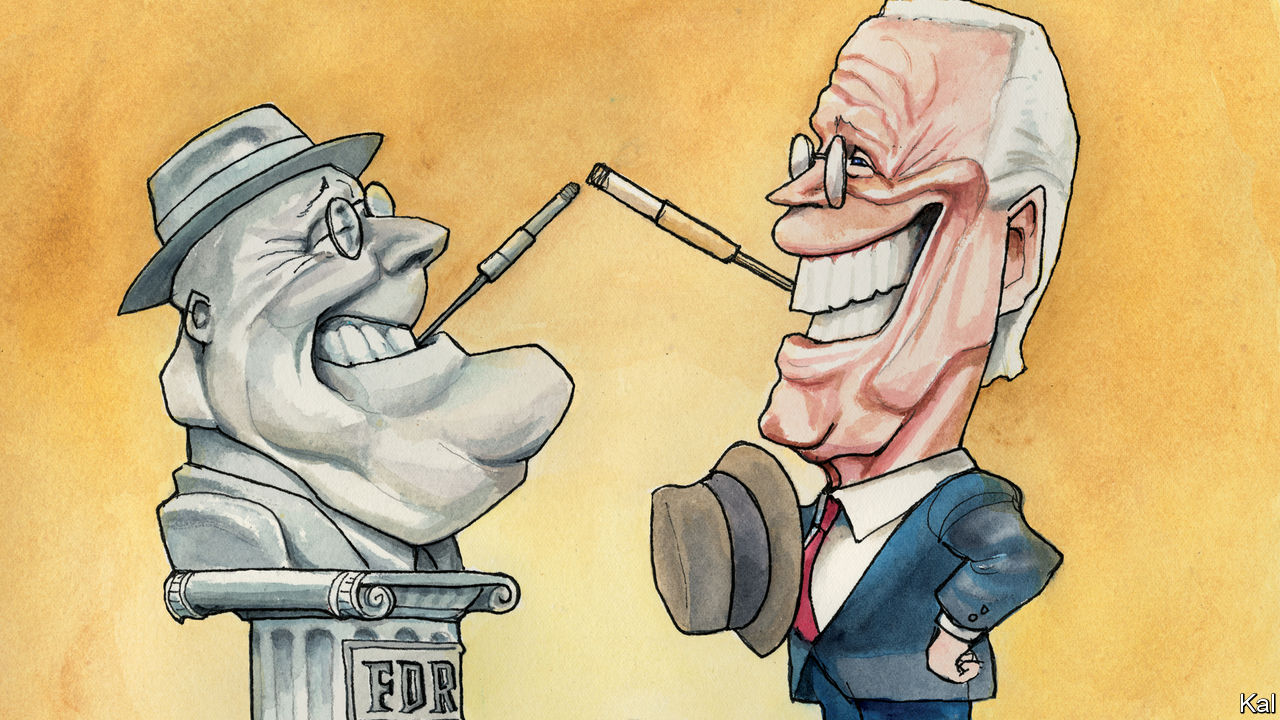 He has been the underdog, the new old man in the White House. Biden’s new economic policy and its social profile are as strongly progressive as anything Bernie Sanders could have dreamed of. The historically massive aid package, which Congress has now passed, could be the start of a major reform of American welfare policy. Nevertheless, the infamous filibuster still stands in the way of the most crucial reforms.

Joe Biden was elected as “the moderate president.” However, he expresses a willingness to put an end to the fundamental miseries of the United States in a style and degree hardly seen since Franklin D. Roosevelt became president in 1933. Biden has put together one of the most experienced and competent teams of Cabinet members and advisers any president has ever presented. These people are also keen to deliver improvements to the vast majority of Americans so that the Democrats can win the midterm elections in two years’ time.

Historically, Biden was lucky to win the Georgia Senate runoff elections in January, which secured him a razor-thin Senate majority and thus the opportunity to break Republican blocking tactics against all progressive policies. This was something that often paralyzed both Bill Clinton and Barack Obama during their presidential terms. Very quickly, it has become apparent that the vicious Republican Senate leader, Mitch McConnell, as usual will try to shoot down everything that comes from the new administration. What is more, it has turned out that Biden does not suffer from the illusion that Obama initially held as president — namely, that one could appeal to the Republicans’ better nature.

Biden has indeed talked about reaching across the aisle and making broad compromises with the Republicans. However, he interprets this as using the possible majority — in practice, the majority consisting of Democrats alone — to make improvements that also benefit the other party’s voters.

Therefore, in three weeks, the astronomical $1.9 trillion aid package was passed in both houses of Congress without the help of even one single Republican.

The package is not just a form of emergency aid for many people who have become unemployed, who may even starve or are about to be evicted from their homes because the COVID-19 pandemic shutdown has turned people’s financial lives upside down. Moderate economists believe, however, that the economy will become too overheated, which could lead to inflation in the country.

The issue is that the package, along with the successful vaccine rollout, paves the way for rapidly bringing down unemployment and sending a noticeable stimulus out into the global economy. At the same time, there is a major focus on creating an economic recovery in combination with initiatives against climate change and toward a more sustainable development, such as a focus on renewable energy.

The package also lays the groundwork for what undoubtedly are intended to be lasting improvements in welfare. One could talk about the beginning of a welfare state of a European nature: child allowances for all families, subsidies for Affordable Care Act enrollment, massive support for states and local governments to address many years of public service cutbacks.

With his gigantic program to restore America’s degraded public infrastructure, Biden will also strengthen his green policy. In addition, Biden has a plan to erase Donald Trump’s wave of insanely generous tax breaks for the superrich and raise corporate taxes. The latter is particularly interesting because so far the Western world has fought among itself to attract international investments by lowering taxes on corporations.

Attracting investments by lowering corporate taxes is probably a far less effective method than investing in better education and infrastructure. It is noteworthy, however, that in the United Kingdom Boris Johnson will also raise corporate taxes. Eventually, someone will have to pay for the COVID-19 relief packages. Perhaps raising corporate taxes will inspire the European Union countries to make the wealthy and corporations for once pay a large portion of the bill.

The big question that presents itself is whether Biden can persuade Congress to pass the next wave of infrastructure and tax proposals. In passing the $1.9 trillion package, Biden used a special procedural tool known as reconciliation. Reconciliation prevented Republicans from using the filibuster — speaking for hours on end and in practice requiring that at least 10 Republicans support all the Democrats, which is unthinkable.

I do not understand the nooks and crannies of the American political system well enough to determine whether it is possible to implement the infrastructure plan and tax increases with the help of the reconciliation process the Democrats just used for the relief aid package.* However, the filibuster must be eliminated if Biden is to implement progressive reforms of, for example, the educational system and the judiciary, and if social improvements from the recovery package are to be made permanent.

And in reality, most importantly: The filibuster must be eliminated if Biden is to succeed in blocking massive Republican attempts to restrict voter turnout for Blacks, Latinos and poor whites, which is spreading like wildfire through Republican-majority state legislatures.

Easier access to voting (as well as mail-in voting) was largely what defeated Trump. New creative voting restrictions are now being implemented, such as making it more difficult to vote, creating further distance between polling stations and grotesque bans on distributing pizza and water to those who have to wait for hours to reach understaffed polling stations in poor neighborhoods.

For a number of reasons, one can argue that the filibuster must be eliminated, as this is a crucial precondition for Biden to be able to follow through with his reform policies over the next four years. Paradoxically, it can happen with the Democrats’ votes alone if they dare and if they agree. History shows that the filibuster has been unilaterally used by Republicans to slow down social progress. I am guessing that its elimination will require significant funding for conservative-leaning Democratic Sen. Joe Manchin in West Virginia. This state needs it more than others do, and it is well worth the price if the policy that benefits the vast majority of Americans is to be implemented. I wonder if the old man in the White House, who was a senator from 1972-2009, will find his way.

The author is the former Danish minister of foreign affairs and former president of the U.N. General Assembly.

*Editor’s Note: A Senate parliamentarian has ruled that Biden’s infrastructure package could be passed using the budget reconciliation procedure.