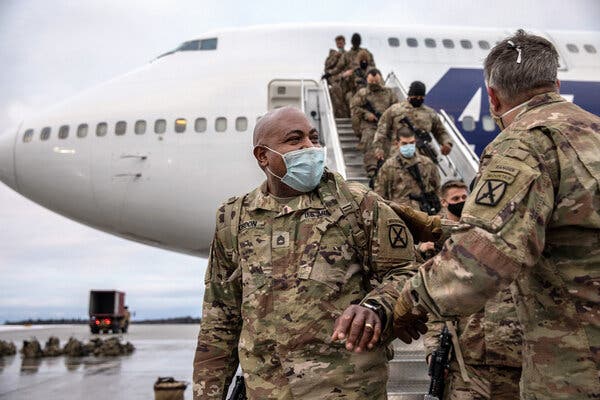 U.S. President Biden announces the withdrawal of the United States from Afghanistan by Sept. 11. Following this, the Taliban will return to power — and women and girls will suffer most of all.

If one starts a war, at least two things are necessary. First, a good reason is needed because many people die and suffer in wars, which also cost a lot of money. Second, a good plan is necessary for how this situation is supposed to end. The United States had a good reason and a mandate legitimized by international law when it invaded Afghanistan with its allies after the 9/11 attacks. What the United States has lacked thus far: a plan. And so this war, which President Joe Biden will symbolically end on Sept. 11, 2021, will go down in history as a senseless operation that cost many people their lives and devoured billions of dollars.

The war was considered senseless from the beginning primarily because the withdrawal will bring about the status quo and return Afghanistan to the political situation it was in before. The Taliban will return to leadership of the country, perhaps somewhat tamed into a unity government. In a more realistic scenario they will attempt to seize total power. Who else would stop them? This prospect is a disaster for the United States and its allies in Berlin, London and Paris, and it is a disaster for the Afghans, who have relied on the West’s promise not to leave their country again until stable relations prevail.

Had Bush Offered the Islamists Peace, the Country Would Be Better Off

After the U.S. intervention in Afghanistan, the Taliban were driven out of Kabul within a few weeks. Had then-president George W. Bush generously made the weakened Islamists an offer of peace, the country would be better off today. And if only a fraction of the billions of dollars that flowed into the military part of the operation in the past 20 years had benefited Afghanistan’s long-term economic development, the country would be able to prosper at least at a low level today.

But that is not the case, even if the West rightly points to the millions of children who can now go to school. However, most of them have no prospects of jobs or a life in safety. The Taliban’s return to power is a threatening scenario for Afghanistan’s girls and women most of all. They still participate in public life, but they must expect that their freedoms will be further restricted. Activists are already reporting that they would be on the Islamists’ death lists.

Western Hubris Is Primarily To Blame

Without peace everything is nothing, Willy Brandt once said, and peace does not prevail in Afghanistan. That’s primarily due to western hubris. When the Bush administration wanted vengeance as quickly as possible after 9/11, the allies engaged in a veritable “beauty contest.” They wanted the Americans to like them: “The decision to go to Afghanistan had 0% to do with Afghanistan and 100% with the United States. If Osama bin Laden had hidden himself on the islands of Fiji, we would have followed them there.” These are not the words of a pacifistic government critic, but rather retrospective sentences from the then foreign policy advisor of Chancellor Gerhard Schröder. For too long there was no plan for this operation besides wanting to be a good alliance partner.

However, the crudest errors were made by the United States. Bush absolutely wanted a central government in Kabul, which ran counter to the country’s ethnic structure and tribal traditions. A common approach by the allies was also lacking for all of Afghanistan. The Afghan reality, characterized by many shades of gray, was preferred to be divided up into good (the government in Kabul) and evil (the Taliban) in the sense of complexity reduction, until it was realized that even the government had dark spots. And each regional force preferred to make deals in their territories with the warlords instead of ousting these anti-democratic princes.

Trump Let Himself Be Outmaneuvered

In his presidency, Barack Obama made the mistake of scheduling the end of combat operations when the enemy was militarily equal. From there on the Taliban knew: We don’t have to win this war, just wait it out. And successor Donald Trump let himself be diplomatically outmaneuvered by the Islamists. His negotiators agreed with the Taliban for the United States to completely withdraw, before an intra-Afghan peace settlement was even on the agenda. And thus the Islamists now firmly refuse any concessions to the Afghan government at the negotiating table.

In the end, Biden, commander-in-chief number four in the Afghanistan war, can’t muster the strength to correct this mistake through tough diplomacy flanked by the military. The longest U.S. military operation in history ends; the war in Afghanistan continues.