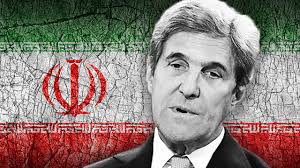 A serious scandal has erupted around John Kerry — the former U.S. secretary of state and now the special presidential envoy for climate. In a leaked audiotape, Iran’s foreign minister, Mohammad Javad Zarif, talked about his discussions with the top American diplomat during the Barack Obama administration.

Many interesting details have emerged, but the main bombshell was Zarif’s confession that Kerry had told him about more than 200 secret Israeli operations against Iranian facilities and security forces in Syria.

Israel is a favored, privileged ally of the U.S. On the other hand, Iran, having declared Israel its main enemy, is an unfriendly country to Washington, to put it mildly. So, Kerry’s behavior is technically serious, and perhaps criminal, misconduct. Of course, no one will imprison Kerry — after all, he is not Donald Trump or even Mike Pompeo, but the favorite among the liberal public and a longtime personal friend of President Joe Biden. But for American diplomacy, the leaked tape, first published by The New York Times, became a big nuisance.

Kerry responded immediately, tweeting that he had never said anything like that to his Iranian counterpart — “either when I was Secretary of State or since.” The mention of “since” is very significant. In fact, a couple of years ago, when Trump was still president, there were reports in the press about the alleged informal contacts between Kerry and Iran’s diplomats. Gossips argued that the former secretary of state urged the Iranians not to rush to violate the provisions of the nuclear deal, from which the U.S. unilaterally withdrew in 2018. According to sources, Kerry assured Tehran that Trump would not stay in the White House for long, because he would either be impeached, removed from office under the 25th Amendment, or simply fail to be reelected. Thus, Washington would return to the implementation of the 2015 Joint Comprehensive Plan of Action — the Iran deal’s official name according to the UN documents.

Kerry’s behavior violated the Logan Act, a 19th century law that prohibits individuals from negotiating with foreign countries on behalf of the U.S. Of course, the Logan Act has only been applied once in U.S. history and did not lead to a guilty verdict. However, the very fact of illegal actions could negatively affect Kerry’s prospects in the new administration. Perhaps that is why he was appointed to a post not requiring Senate approval.

Either Tehran did not believe Kerry, or the experienced diplomat did not say those things, but Iran announced that it would not comply with the terms of the deal in the situation when all the previously lifted sanctions were once again implemented. Uranium enrichment at Iranian nuclear facilities has resumed. According to the JCPOA, the nuclear enrichment level should not have exceeded 3.67%. However, in 2019, Iran began to enrich uranium to a purity of 20% and has recently announced that this figure will soon increase to 60%.

The Biden administration has decided to renegotiate the Iranian nuclear deal. Indirect talks on the JCPOA renewal between Iran and the U.S. and multilateral consultations (with the participation of Russia, China and three more European mediators) began in Vienna. Of course, nowadays Tehran demands more than in 2015, since it considers itself a victim, and Iran’s nuclear program has dramatically improved over the years. Nevertheless, judging by the reports, negotiations were progressing well in the Austrian capital. And now this scandal …

Many experts believed that the true purpose of leak was to sabotage the JCPOA renewal. There were even suggestions that the audio was obtained and leaked to the media by the Israeli special forces. There is a certain logic to this — back in the 2010s Israel actively opposed the lifting of sanctions against Iran. Prime Minister Benjamin Netanyahu even flew to Washington in 2015 and, despite objections from Obama, delivered a fiery speech to Congress, calling for an end to cooperation with Iran. Similarly, now, on Capitol Hill, there may be objections to the renewal of the Iran deal via closed negotiations. Of course, the Democratic majority in Congress will support the very idea of JCPOA renewal. However, considering the scandal around Kerry, one can expect demands from legislators, and not just Republicans, to either bring them up to date or attach tough terms to the phased lifting of sanctions, to which Iran’s leadership will not agree.

In Iran not everyone is enthusiastic about JCPOA either. Back in 2014 and 2015, many anti-American “hawks” demanded a rejection of a pact with the “Great Satan.” And now the same will be demanded. The “hawks” also benefit from the audio leak, since Zarif is one of the only highly influential people in Iran advocating for the normalization of relations with the West. He enjoys the trust of President Hassan Rouhani, who is also regarded as a “dove” and a reformer, as well as of the country’s supreme leader, Ayatollah Khomeini. If someone else were in his place, perhaps the ayatollahs would not have allowed the 2015 deal to go through. Not because they did not want the sanctions lifted, but simply out of an almost paranoid distrust of the U.S. But Zarif convinced them that the deal would work, and they believed him.

Now the main ideologue behind the JCPOA in Iran is under attack. The deal’s opponents have received clear evidence of American treachery. Tehran does not believe there is any freedom of the American press. No matter how The New York Times editorial staff got their hands on the scandalous tape, the newspaper would not have dared to publish it without an authorization from the White House. In any case, this is what Iran’s leadership thinks. And there is a certain measure of truth in its point of view. The U.S. liberal media defended Joe Biden and his associates in 2020 too desperately to now sabotage an international initiative that is so important to the Democrats. If, of course, this initiative is really that important. But more on that later.

On the tape Zarif also criticizes the leaders of the Islamic Revolutionary Guard Corps, a special force that reports directly to the supreme leader. The top Iranian diplomat was forced to declare that his words were completely taken out of context. Upon defending his boss, Foreign Ministry spokesperson Saeed Khatibzadeh lamented that “what was published was not an interview with the media” and could not have been from the beginning as “statements are his personal opinions … within the framework of routine and confidential interviews within the government.” Nevertheless, there will now be many complaints against the foreign minister — after all, Tehran does not appreciate such leaks. And why was the interview so frank? Ultimately, the interviewer, Saeed Lailaz, is not part of the country’s leadership, despite being an influential economist and journalist.

However, all of this does not answer the question of why the conversation was recorded and how the audio ended up in the hands of the American publication. And here comes another version of what happened. The leak could have been set up by the very same IRGC — the subject of Zarif’s complaints. The leadership of this large and powerful intelligence agency has repeatedly expressed skepticism about the deal with the U.S. and five other international intermediaries. So, an attempt to torpedo the JCPOA renewal could have come from the “guards.”

But there is another version that has no direct relation to the Iran nuclear deal. It is no secret that the Biden administration, this liberal Washington Politburo, is a site of intense undercover battles to influence important decisions, including the foreign policy ones. The recent pandemonium over the process of deescalation with Russia and the organization of imminent bilateral talks showed that several sects in the U.S. leadership are desperately fighting each other. With this consideration, The New York Times leak becomes clear. The editors of the publication that is extremely devoted to the cause of liberalism-Bidenism could only dare to publish the material at a compelling request by one of the warring factions of the White House — the one that was interested in reducing the influence of Kerry and politicians close to him.

If this version is correct, then we are dealing with a second disturbance in a month in the American administration, which threatens U.S. credibility in the eyes of its counterpart in the potential negotiations. Influential groups in Washington are either convinced that such credibility is not special and valuable, or they absolutely do not care about the consequences — the main objective is to win the faction struggle within the government apparatus. Both scenarios make the current administration an unreliable negotiator, as well as a toxic and dangerous actor on the international stage. This circumstance not only needs to be taken into account, but also has to be directly pointed out when discussing any issues with the West. And now let us imagine that everything described happened by chance, without any intent or “cunning plan.” Kerry opened up, apparently wanting to increase the level of personal trust between the conflicting parties, and then, through an oversight, the audio of their conversation was leaked to media. …

All the same, the situation turns out badly. The American diplomat confidentially says something to his counterpart, and then his revelations are published by the American press and used to sabotage the agreements reached. In simple terms, this is a definite screw-up. And so far, in foreign affairs, during the first 100 days of Biden’s presidency, the administration engineers one screw-up after another. And, apparently, it is not even ashamed.

About Nikita Gubankov 27 Articles
Originally from St. Petersburg, Russia, I am currently a student at University College London, UK, studying for a BA in History with Spanish Language. My interests include history, current affairs and languages. I am a keen translator from Russian into English and vice-versa, and I also translate from Spanish into English. After finishing my degree, I am planning to undertake an MSc in Translation Technology.