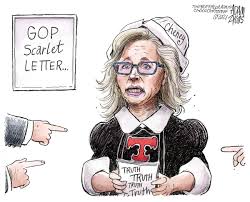 Social media’s continued ban of Donald Trump has not stopped the former president. Behind the apparent silence, he is strengthening his position in the Republican Party. If you want to be chosen for the top party jobs, you must embrace the lie that the election victory was stolen from him; otherwise, you will be pushed out.

In the interest of healthy political debate, it has been a welcome break not to be exposed to Donald Trump’s barrage of lies and insults on Twitter and Facebook. Facebook’s decision yesterday to extend the ban on Trump for another six months provides further respite, even if one misses the entertainment value of his messages.

The ban shows how incredibly dependent Trump was on social media in communicating with his supporters. If he were still president, he would have a channel for his message anyway. Without a formal position of power, it is harder.

This deceptive calm does not mean that Trump is being passive. Behind the scenes, he continues to raise money for his organization, and he is sending out an intensifying stream of messages via his Save America political action committee and from a new blog platform from which he is steering the development of the Republican Party.

Even though he does not hold office, he is strengthening his hold on the party. Many of the leading Republicans who denounced his actions in connection with the attack on Congress on Jan. 6 have now toned down their criticism of Trump or have completely back him up. Instead of investigating how the attack could happen, and who was behind what, in reality, was a coup d’état, the majority now just wants to put the matter to one side and move on.

The feeling was that the lies about election fraud would gradually ebb away once Joe Biden was in office. Instead, Trump continues to put pressure on party representatives to spread the lies further and quietly accept them.

Those who try to tell the truth are being slowly forced out of the party. Sen. Mitt Romney was booed when the Republican Party held a convention in Utah last weekend.

Rep. Liz Cheney, third in line in Republican House leadership, continues to heavily criticize Trump for not conceding defeat, most recently in an op-ed in The Washington Post. The only way to save the party’s future, she says, is to stop the personality cult around Trump, stop asserting that Biden’s election was the result of election fraud, and to set up an independent commission to investigate the Jan. 6 insurrection at the Capitol.

For this she is exposed to daily senseless invectives that, calling her “a warmongering fool,” among other things. Trump wants to remove her from the leadership of the party and stop her from being reelected to Congress. He seems to be on his way to succeeding.

Cheney easily survived a no-confidence vote by the Republican Party in the House of Representatives in February, after she was one of the few Republicans who voted in favor of impeaching Trump. But this time it appears the party has turned on her.*

Not just Cheney. Unbreakable loyalty to Trump is required to succeed in the party. No one who wants to be elected dares to challenge Trump.

More than six months after the election, a clear majority of Republican voters still believes Trump was robbed of his election victory. In their eyes, it doesn’t matter that 60 courts, presided over by many judges who were appointed by Trump, rejected all claims of election fraud.

Having met many Trump supporters who are not the least bit ignorant, I am leaning toward thinking that it is not that they believe the claims of election fraud, but simply that they don’t want to accept today’s reality. By keeping the fairy tale about election fraud alive, they also keep alive the hope that their hero, Trump, will return.

They know that Biden won, but don’t want to accept it. By consciously denying the truth, they hope somehow to be able to snatch Biden’s power away. If not now, then at least in the midterm elections next year, or at the latest, in the 2024 presidential election.

Republican-governed states have begun extensive work to restrict voting access for groups who traditionally support Democratic candidates, such as African Americans and low-income voters. Republicans see the possibility of winning swing states such as Georgia and Florida in the future just by stopping as many of the opposition’s voters as possible from exercising their right to vote.

If Trump succeeds in making the party oust Cheney from their leadership, the minority leader in the Senate, Mitch McConnell, might be the next target. All those who have spoken against Trump must be eliminated.

The former president may be gagged, but that does not stop him from swinging his axe.

*Editor’s Note: On May 12, House Republicans voted to remove Cheney from her leadership position.