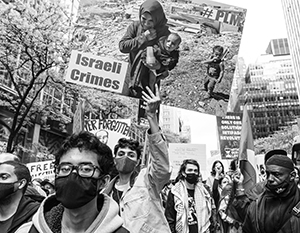 The Israeli army is preparing for a military operation in the Gaza Strip. The shelling in the last few days threatens to escalate into a full-scale war.* If war does start by chance, Israel will have to operate under unusual conditions. Whereas in the past, the U.S. and Europe were mainly sympathetic to Jews, the progressive era directly equates support for the Palestinians with the struggle against sexism, racism and homophobia.

Eight and a half years have passed since the last major Israeli Defense Force military operation against Hamas, which was called the “Operation Pillar of Defense.” That’s a long time, and the world has changed since then. So much so that a Jewish grandmother now calling her grandson in New York from Moscow suddenly learns from him that Israel is a fascist state.

Such generational conflicts can be seen in abundance on social networks, where multinational post-Soviet intellectuals, who habitually perceive the Jewish state as the promised land, encounter groups of equally multinational zoomers [Generation Z] who not too politely explain to boomers that they support the wrong, bad side in the Middle East conflict.

The VZGLYAD newspaper wrote about the reasons for the current aggravated situation in Israel, the Gaza Strip and the West Bank in detail.

The changes have been detected even at the level of big politics. On Wednesday (i.e., five days after the conflict escalated with the launch of thousands of rockets), Israeli Prime Minister Benjamin Netanyahu received a phone call from U.S. President Joe Biden, who said, “My expectation and hope is this will be closing down sooner than later,” Biden told reporters at the White House, and in doing so, Biden added that “Israel has a right to defend itself” and that this was the maximum amount of public support he could express at the moment. That is because, as noted above, the world has changed, and so has America.

During the Cold War, everything was simple: The United States and the Atlanticists clearly supported Israel, their main ally in the Middle East; the Soviet bloc (primarily the Soviet Union itself) supported the Arabs. Contemporary Russia continues to sympathize with the Palestinians (because of the multiple projects it conducts with the Arab world), but it tries not to quarrel with Israel either, on many local and even ideological issues (such as revising the results of World War II). We are now also allies.

The U.S. employs a different kind of “doublethink.” Donald Trump was an unambiguously and aggressively pro-Israel president. This is primarily due to the efforts of his son-in-law and adviser, Jared Kushner, but it was not due to Kushner alone. America has its own tradition of antisemitism, so American Jews, like many other oppressed minorities (such as White Anglo-Saxon Protestants) vote for Democrats, and Jewish businesspeople actively support the Democratic Party. It is an urgent task for Republicans to win away such voters and educate these supporters.

So far, most Jews still vote for the Republicans’ liberal opponents; the power of tradition is strong in the United States, but the ice is not only broken, it is cracking.

Biden himself, who has been involved in foreign policy since the time of Alexei Kosygin, perceives the Middle East conflict through the prism of the old canons. But the new generation of Democrats is of a different opinion, especially those who belong to the colorful, noisy and aggressive coalition of socialists, feminists, LGBTQ, antifa, Black Lives Matter movement and other minority rights activists.

Supporting the Palestinians and branding Israel as a fascist state is now a mandatory part of left-liberal thinking, along with condemning racism, white (specifically white) nationalism, sexism, homophobia, transphobia and those who do not believe in global warming. The colors of the NPA** and the portrait of George Floyd are not adjacent street graffiti but part of the same picture.

Many politicized Black Americans, whose views might be called anti-white racism, Black nationalism, or pan-Africanism, convert to Islam on principle, as their non-white faith. Half a century ago, this was part of the ideology of the famous Black Panthers and their leader Malcolm X.*** And in today’s United States, fighting Islamophobia is almost synonymous with fighting racism.

In fact, American leftist thought no longer thinks of Jews as minorities, and has relegated them to the white privileged majority, while leftist thinking clearly views Arabs, especially Muslim Arabs, as an oppressed group, along with women, Blacks, gays, transgender people, etc.

Actually, Tlaib is one of the main faces of the Democratic Socialists of America, a party with which Alexandria Ocasio-Cortez is somewhat better associated with in Russia. Ocasio-Cortez also supports a free Palestine, a position that is necessary to avoid being called a fascist. Trump has been accused of fascism because of his active support for Israel, among other things.

The situation is similar in Europe, where the shift in public opinion began even earlier, but older Europeans express it more intelligently. Aggressive antisemitic rallies involving the burning of everything from Israeli flags to stores are also plentiful here, but the main participants are immigrants from Muslim countries, and those belonging to Islamic communities known as umma. And in recent years, this contingent has been increasingly joined by students from bourgeois families who do not hold ultra-leftist views, but merely left-wing views.

If we look in Europe for the most anti-Israeli country in terms of foreign policy rhetoric, forgetting Turkey for a moment, there is a big question as to who takes first place: the officially Muslim Albania or multicultural Sweden.

It does not only involve a demographic transition involving the growth of Arab and Islamic communities, which accelerated sharply during the Arab Spring and the migration crisis. It is about an ideological transition. Young Europeans, without much reflection, run the rainbow banner of LGBTQ and the traditionally Arab flag of Palestine up the same flagpole.

Even in Israel itself, the relationship between beachside Tel Aviv, which now resembles a vast gay neighborhood, and the Jewish population of small towns (along with religious Jerusalem) is now similar to the relationship between the Russian liberals of the 1990s and those who then called themselves patriots and read Zavtra. Even the rhetoric is about the same: Pay and repent for the oppressed Palestinian people. This is what Jews say to Jews, including those in places that are now being bombed by Hamas.

Netanyahu’s government, which has been in place for more than 12 years, does not seem to have any conscious strategy on how to reshape Israeli soft power in this rapidly changing world. Not so long ago, the Jewish state was considered an outpost of Western civilization, but now it is rapidly becoming an enfant terrible in a world with new values, with feminists, BLM supporters, transgender people, and Russian Soviet patriots on one side of the internet barricades.

*Editor’s note: A ceasefire to hostilities between Israel and the Palestinian militant group Hamas in the Gaza Strip took effect on Friday, May 21.

**Editor’s note: It is not clear to whom the author is referring with the reference to “the NPA.”

***Editor’s note: The leader of the Black Panther Party was Huey Newton.  Malcolm X was an African American Muslim minister and human rights activist during the civil rights movement best known for his time spent as a spokesman for the Nation of Islam.