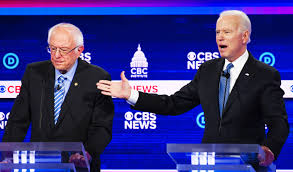 Sen. Bernie Sanders is leading a rebellion against the United States’ Israel policy, and now the crisis is causing a divide in the Democratic Party.

That’s how Sen. Bernie Sanders closed his recent essay in The New York Times. The piece is a scathing diatribe against Israel’s prime minister. It is also a strong critique of America’s policy.

Sanders is himself Jewish, raised in Brooklyn. Many of his relatives were killed in the Holocaust. He has said before that he is “100% pro-Israel.” Sanders has supported a two-state solution and has been critical about the use of violence on both sides.

However, he, along with increasingly more fellow Democrats, has begun to speak differently about the conflict in the Middle East. It’s no longer just about borders and settlements.

It’s about racism and equality. Suddenly, the Palestinian cause has gained a small foothold in the American debate. Drawing a parallel with Black Lives Matter has put the whole conflict in a new light.

It has caused a painful rift in the Democratic Party and has put President Joe Biden in a real bind.

“Israel has a right to defend itself,” Biden said, when the violence escalated last week.

Familiar words from an American president. Unreserved support for Israel has been the automatic reaction of both parties for a long time.

Powerful forces are pushing to keep it that way. The American Israel Public Affairs Committee is one of the most powerful lobbying groups in Washington. AIPAC has worked for a strong relationship between Israel and the United States for over 50 years. Among other things, AIPAC funds educational trips to Israel for new members of Congress.

Anyone who criticizes the relationship between the two countries takes a huge political risk. That’s what Rep. Ilhan Omar found out a couple of years ago. Omar criticized AIPAC and its influence on several occasions. Her language was disrespectful at times.

Many fellow Democratic Party members reacted strongly. She was accused of being antisemitic. Some demanded that she be expelled from the House of Representatives. In the end, Omar had to apologize for her remarks and was reprimanded by House Speaker Nancy Pelosi.

A Palestinian Scarf in Congress

The situation involving Omar became a sort of turning point, however. The Democratic Party has become considerably more tolerant. Other viewpoints are given a chance. The Palestinian perspective has become a part of the conversation, even if it’s a rather small part.

Last Friday, Rep. Rashida Tlaib stood up and spoke in the House of Representatives with a Palestinian scarf over her shoulders. She quoted the words of a mother in Gaza: “Tonight, I put the kids to sleep in our bedroom, so that when we die, we die together,” Tlaib said, breaking into tears.

She is Palestinian herself. Tlaib, Omar and Alexandria Ocasio-Cortez make up the group informally known as “the Squad.”* They are young, progressive and come from the Sanders wing of the party. They have criticized the administration’s careful and somewhat passive approach to the crisis in the Middle East in the last week.

What is surprising is that they have gained support from many of their moderate colleagues in the Democratic Party — including some of the party’s most ardent and loyal Israel supporters.

Now they are putting pressure on the Biden administration to back a cease-fire. In practice, this means going against Israel’s wishes by asking it to stop bombing Gaza. Prime Minister Benjamin Netanyahu has said that the country will not stop before it has destroyed Hamas’ weapons arsenal.

There’s a new and unexpected tone in Washington, and it seems to have caught older Democratic leaders off guard. After holding back for some days, Speaker Pelosi and Senate Majority Leader Chuck Schumer came out in support of the cease-fire.

President Biden resisted the pressure for a long time, but in the end, he gave in.** Nevertheless, he has not managed to articulate anything even resembling a clear stance. It could quickly become a dangerous weakness in a changing political landscape.

The situation has exposed the deep division in the Democratic Party yet again. The oppression of the Palestinians has now become a part of the ongoing self-scrutiny of the left.

At the same time, Israel has moved in the opposite direction. Nationalism has been steadily gaining more power. Netanyahu has become closely allied with Donald Trump and the far right in America during the last few years. There are also a number of clearly racist politicians in Israel’s parliament, the Knesset. Some of them work together with Netanyahu.

This has provided an opening for a whole new kind of debate about the United States’ relationship with Israel and is putting President Biden to his first great test in foreign policy.

He has shown a surprising ability for new thinking and political courage in other areas. He just needs to be able to summon the same ability when it comes to the Middle East conflict.

**Editor’s note: A cease-fire was declared on May 21, and has held to this date.