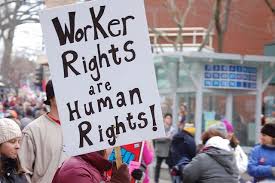 For some time now, the U.S., which claims to be a “beacon of freedom” and “protector of human rights,” has continued to sling mud unfairly at China and spun lies about “forced labor” in Xinjiang. It has been trying desperately to get Western nations to put pressure on China. However, paradoxically, not only has the U.S. been slow to produce conclusive evidence of “forced labor” by China, but its own abhorrent labor rights violations and forced labor practices have once again been exposed by the media.

Recently, the media revealed that hundreds of workers from India were recruited to build a large Hindu temple in New Jersey. These Indian workers are forced to work more than 87 hours a week and earn only $1.20 an hour, far below the minimum wage required by federal and state laws.

In fact, such incidents are not surprising in the United States, where there are many similar cases of labor rights violations. According to U.S. media reports, during the initial outbreak of the COVID-19 pandemic, some U.S. business owners ignored the health and safety of their staff and requested that they not wear personal protective equipment in order to avoid “scaring customers” and causing panic. Some retail employees have been fired or forced to quit companies after calling for the closure of stores to prevent staff from contracting the virus. In addition, the U.S. government’s ineffectiveness in fighting the pandemic has made employees in congregated workplaces such as meat processing plants more vulnerable to COVID-19. From March to September 2020 alone, at least 495 meatpacking and food processing plants across the U.S. experienced outbreaks of COVID-19 due to workers operating in close proximity and a lack of protective measures.

This is just the tip of the iceberg of U.S. labor rights violations. According to a report by the International Trade Union Confederation, the U.S. has a systemic problem of violating labor rights, and is the worst performer among major developed countries. Statistics from the International Labor Organization show that the U.S., the most developed country in the world, has only ratified 14 international labor conventions and two of the ILO’s eight “fundamental” conventions to date, making it one of the countries with a relatively small number of ratifications.

Child labor, employment discrimination, exploitation of “sweatshop” labor … through news reports in U.S. media, it is not difficult to see that various violations of labor rights occur frequently in many places in the United States and are not isolated cases. If you know a little about U.S. history, you know that “the slave trade,” an evil system of forced labor that violated human rights, is one of America’s ugliest, unhealed scars. To this day, its legacy is still deeply rooted in U.S. society, except that the victims have changed from the Black slaves of then to the immigrants of now.

Let’s look at the shocking numbers. In the past five years, cases of forced labor and human trafficking have been reported in all 50 states and Washington, D.C.; in 2019 alone, the FBI reported 1,883 cases of human trafficking, over 500 more than in 2018; every year as many as 100,000 people are trafficked to the U.S. from abroad for forced labor, half of whom are trafficked into “sweatshops” or domestic servitude. It is no exaggeration to say that forced labor is everywhere in the United States. These chilling figures reveal the hypocritical face of the “defender of human rights” and the fragility of the “beacon of freedom.” Behind this lies the hypocrisy and cruelty of the U.S., its long-standing contempt for human rights and its double standards.

This shows that the accusation of “forced labor” that the U.S. has taken great pains to lay at China’s doorstep really applies to itself. It’s a pity that despite their notorious, dark history and embarrassing record, U.S. politicians and the media not have only forgotten the pain before the wound has healed, but also judge others, make wild accusations and interfere with China on human rights issues again and again. Just where does the U.S. get its tenacity and self-confidence from? At this point I cannot help but urge the United States, if it has the time to make up lies and use smear tactics, to first look in the mirror and reflect on how to protect the legitimate rights and interests of its workers and implement international labor conventions.