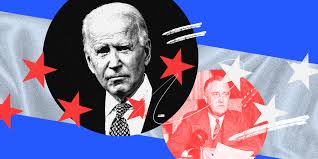 The U.S. president is willing to take risks to leave a deep and transformative mark.

It is because he is courageous and, unlike others, does not depend strictly on help from polls, but is willing to make the reforms the United States needs to face the future in better shape. I had the opportunity to get to know him when I was the ambassador in Washington, and I keep an image of him as a discreet politician, always aware of the subordinate role that the position of vice president gave him. He once commented that former President Calvin Coolidge said he had two friends: One embarked on a faraway trip and the other was appointed vice president … and he never heard from either of them again.”* And now he’s out in the open. It was not easy to stand out after a presidency as histrionic as that of Donald Trump, who nicknamed Biden “Sleepy Joe”” [https://www.bostonglobe.com/2020/07/02/metro/trumps-sleepy-joe-nickname-biden-isnt-working-even-trump-knows-it/] because he never responded to Trump’s provocations during the melee in the presidential debates for his own reasons, which is the mistake Pedro Sánchez made and that cost him a good wallop in the Madrid elections.

When Biden became president at 78, the world labeled him a “transitional” and “one-term” president, since he was not expected to run for reelection at the age of 82. For the same reason, Kamala Harris appeared to be the Democratic hope for the 2024 election in which Trump is threatening to run. And it turns out that Biden has surprised us by not ruling out the possibility of running himself. But whatever he does in 2024, the important thing is what he is doing now, using courageous stewardship to rise to the tremendous challenge of the times in which he is living.

Biden is willing to take risks to leave a deep and transformative mark on the country he inherited, plunged in a pandemic that his predecessor did not want to see, a pandemic which has taken the lives of thousands of compatriots and brought a serious economic crisis that triggered unemployment. Since health care is, in many cases, linked to employment in the United States, personal and family difficulties are increasing in a way that is hard to understand in Europe. The world’s gross domestic product is 80 trillion euros (the U.S. GDP is $18 trillion) and the stimulus and aid granted by Washington to resolve the crisis reached the staggering amount of $6 trillion (the Spanish GDP is $2 trillion) for a rapid and massive vaccination program implemented to save lives and rescue the economy. It also included direct aid to citizens, families, businesses and states; investment in education and in fighting inequality and racial discrimination, support for a vast plan of infrastructure and job creation, a determined fight against global warming by returning to the Paris Agreement, restricting oil exploitation in certain regions and promoting renewable energies and the electric car. All this represents a revolution comparable to those carried out in their time by Franklin Delano Roosevelt, Lyndon B. Johnson and Ronald Reagan. What is exceptional is that now a man who everyone considered to be “a transitional president” wants to do the job and knows very well that in order to carry out these plans, he will have to face a Republican Party that won’t give him the time of day. There is no hiding the fact that so much money all at once is also a cause for concern because it is risky.

Indebtedness has reached 124% of GDP (in World War II it reached 122%), and will increase the burden for future generations even though low interest rates currently make it easier to pay. But it will tend to rise because inflation will rise as well with the brutal increase in the available money supply, which may also have a very negative effect on poor countries indebted to the U.S. in dollars and affected by the pandemic, thus auguring more poverty and more inequality on a global scale. In any case, Biden has decided to take a risk, assuming that it is better to go too far than to fall short in the face of the crisis, and he is probably right because this is the best way to guarantee the V-shaped rebound of the economy, which, thanks to him, will occur in the U.S. before it does in Europe.

Editor’s Note: This quote, though accurately translated, could not be verified.