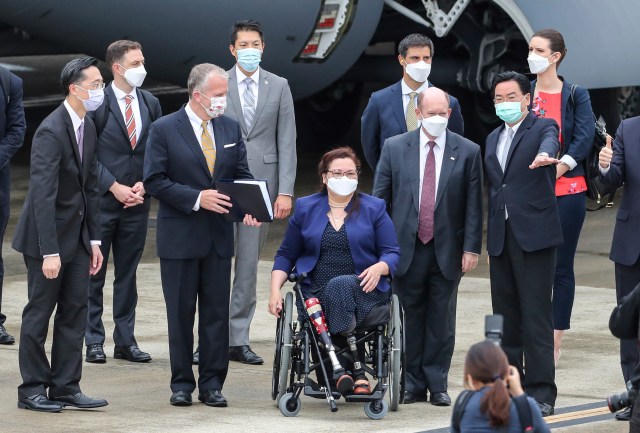 In addition to highlighting U.S.-Taiwan cooperation on controlling the pandemic, the visit of U.S. Sens. Tammy Duckworth, Dan Sullivan and Chris Coons also carries some additional implications that deserve attention.

First, prior to the three senators’ visit to Taiwan, the U.S. announced that the Biden administration would be giving Taiwan 750,000 doses of vaccines and pandemic prevention materials to illustrate the United States’ and Taiwan’s efforts to work together to combat the new pandemic.

In his farewell speech on May 26, the director of the American Institute in Taiwan’s Taipei office, William Brent Christensen, said that Taiwan was not a priority country for U.S. vaccine aid due to the relatively low number of confirmed cases and deaths from the virus. He further asked President Tsai Ing-wen to find another source of supply to meet the urgent need. Following this statement, there was a national outcry that spread across political party lines. Therefore, the three senators’ recent visit to Taiwan not only is timely assistance, but also has the political connotation of “rescuing” Tsai’s administration.

Second, the cross-party group of three senators that visited our country are all old friends of Taiwan, and have all contributed to Taiwan’s efforts to obtain vaccines from the White House, demonstrating strong support for Taiwan on the part of our friends on Capitol Hill.

Sullivan, a Republican member of the Senate Armed Services Committee, visited our country in 2016 on behalf of the U.S. senator and chairman of the Senate Armed Services Committee, John McCain. The Democratic Party’s Coons not only visited Taiwan on the 40th anniversary of the Taiwan Relations Act in 2019, but was also one of the sponsors of the Taiwan Assurance Act and the Taiwan Allies International Protection and Enhancement Initiative Act.

Democratic Sen. Duckworth, a member of the Senate Armed Services Committee, said she and other Senate colleagues have told the White House that Taiwan is an important partner in the U.S. Indo-Pacific strategy and plays an integral role in the U.S.-China vaccine diplomacy. As a result, the Biden administration has agreed to make Taiwan one of the top priority areas for foreign vaccine aid. She has also been consistently instrumental in promoting U.S.-Taiwan trade and security cooperation.

Third, due to the trip’s tight schedule, the senators could only conduct a three-hour whirlwind meeting, and to avoid contact with crowds of people, their activities were limited to the VIP room of the Songshan air force base: as such, they asked Tsai to make an exception and meet with them there.

Thus, the mission of the three senators’ trip would definitely not have been a fact-finding visit; it was at most an exchange of views and a mutual briefing with Tsai on deepening U.S.-Taiwan relations, coordination of Indo-Pacific strategic efforts and cooperation on pandemic control.

Lastly, the three senators had originally been scheduled to attend the annual Shangri-La Dialogue* in Singapore in early June, but the conference was canceled due to the pandemic, so they changed their itinerary to visit South Korea and Taiwan instead.

It is worth noting that the three senators were aboard a U.S. in-service C-17 strategic transport aircraft, with this being the first time that this type of transport aircraft has flown to our country, bringing with it unusual military implications.

When Typhoon Morakot struck Taiwan in 2009, the U.S. military sent a transport craft to bring relief materials to Taiwan. In 2015, two U.S. F/A-18s were forced to land at Tainan Airport due to mechanical failure. The following day, the U.S. sent a C-130 transport craft with repair tools to Taiwan. The Chinese Communist Party stated that they hoped there would not be a next time.

Now, the U.S. has sent strategic transport craft to Taiwan with even stronger strategic connotations, as if suggesting to Beijing that the more Chinese military aircraft disturb Taiwan, the more the U.S. will support Taiwan in turn.

*Editor’s note: The Shangri-La Dialogue is an annual inter-governmental forum run by an independent think tank, the International Institute for Strategic Studies, concerning security matters in the Asia-Pacific region.