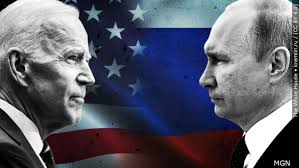 Border states in Eastern Europe have followed the Biden-Putin summit in Geneva with consternation. From the beginning, they have known that Vladimir Putin holds all the cards under the current circumstances and will be stronger when he leaves the meeting. These countries view Joe Biden’s new approach as confirmation that if Putin decides to intervene in their internal affairs, as he did in Ukraine, they will be left to their fate by the other members of NATO.

Joe Biden provided a major concession to Russian President Vladimir Putin several days before the Group of Seven summit of major industrial nations held this week in Geneva. In the meeting with German Chancellor Angela Merkel on the margins of the G-7 summit in Britain, the president announced that the United States would not oppose ongoing construction of the Nord Stream 2 pipeline, which will transfer Russian gas to Germany and to the rest of Europe under the Baltic Sea, providing an alternative to the existing supply pipelines from Russia via Ukraine.

The Trump administration strongly opposed construction of the undersea gas pipeline for many reasons, including the assertion that it would increase Europe’s dependence on Russia and, accordingly, strengthen Russia’s ability to influence developments in Europe. Opposition was also based on the claim that construction of a “Ukraine bypass” pipeline would cause major damage to Ukraine’s fragile economy, which is under growing military pressure from Russia. Donald Trump consciously worked to weaken the German economy, seeing it as America’s main economic rival. The planned completion of the gas pipeline also will strengthen Germany’s standing in the EU at the expense of eastern border states—Poland, Estonia, Latvia and Lithuania—which feel threatened by Moscow, despite the defense umbrella that the NATO military alliance provides.

While Biden is still trying to reassure his NATO partners of Washington’s commitment to the military alliance, particularly Article 5 of the defense alliance pact which requires all member states to act together against an attack on the security and sovereignty of each NATO member, he took a step in the opposite direction, increasing the existential fears of those members of the alliance most susceptible to Russian pressure: the three Baltic states and Poland. Those watching Putin’s ongoing abuse in Ukraine for the past seven years see a confirmation of their worst fears in Biden’s new approach. If Putin also decides to become involved in their internal affairs, as he did in Georgia and Ukraine, they will be left to their fate by the other members of NATO which are unable or uninterested in a military conflict with Russia. The Baltic states have large Russian minority populations. Poland constantly suspects Russia of meddling in its internal politics.

The Polish and Baltic people were offended that Biden did not find it necessary to update them at the outset about lifting American opposition to Nord Stream 2. In addition, the Poles were also offended that Biden did not meet with their conservative President Andrzej Duda on the margins of the NATO summit. Only after the Polish foreign minister attacked the Biden administration’s current approach to Poland did Biden see fit to make time for a short meeting with Duda.

The Democrats in the United States do not see the conservative government in Poland as a reliable partner and ally, which is in complete contrast to the previous administration. Biden and his administration divide the world between autocratic regimes such as Putin in Russia, and democratic regimes such as Poland and other European states that are ruled by hard-line right-wing governments, which the Democrats consider to be closer to their anti-democratic rivals. In fact, the former Communist countries of Central and Eastern Europe sense that the current administration is refocusing the center of gravity in Europe on Germany, particularly following Britain’s exit from the EU.

If the Republican administrations of George W. Bush and Trump preferred to fortify relations with “the new Europe” – new democracies that arose in the former Communist bloc – Biden is choosing to gamble on “the old Europe,” Western Europe, led by Germany. This is not good news for “the new Europe,” mainly because of the winds blowing from Moscow. Border states in Eastern Europe have followed the Biden-Putin summit in Geneva with consternation because, from the beginning, they knew that Putin, under the current circumstances, was holding all the cards he needs to emerge stronger from the meeting, which is what happened.

Biden’s first trip to Europe as president of the United States allowed the Europeans to see what the American media had rigorously concealed; that Biden’s ability to lead the Western world at the age of 78 is questionable. At every stop of his European trip, from the G-7 summit in Cornwall, England, to the NATO and EU summits in Brussels, to the summit with Putin in Geneva, Biden was repeatedly caught in situations that suggested he was having problems. In Cornwall, he appeared to be straggling behind the rest of the leaders and did not appear at the head of the group or at its center. He said that Queen Elizabeth II reminded him of his mother (while Putin said that Biden frequently mentioned his mother in their conversation), and he confused Libya and Syria three times during a press conference.

Along with this, in Brussels he broke into odd laughter with reporters when asked if he still considered Putin to be a “killer” (as he said during a television interview several months ago), and then had difficulty formulating an appropriate response. In the middle of a conversation with reporters on the anticipated meeting with Putin, he began to lash out at the Republican Party. In a conversation with EU leaders, he jumbled his words and began to apologize for forgetting many people. Two days before this, he tried to joke that if he took questions that were not previously prepared from him by his team, he would be in trouble. At the beginning of the summit with Putin, Biden was captured by the cameras leafing through prepared notes, and at the press conference after the meeting, when he deviated from the list of questions previously prepared for him, it appeared that he was losing control. In other words, in the space of a few days, Biden explained that he would be in trouble if he did not do what his advisers told him to do, an admission that he was not in control, and then when he decided to deviate from his advisers’ instructions, he did not know what to do.

It is still too early to know what happened behind closed doors between the presidents of the United States and Russia, but Putin twice allowed himself to respond sarcastically to questions from Americans during his separate press conference. When asked about the substance of his conversation with Biden on Ukraine, Putin responded enigmatically about whether he understood correctly what the American president said to him. Later, Putin was asked to describe a previous meeting he had had with Biden a decade ago, which Biden included in a book of memoirs. In the book, Biden wrote that he told Putin that when he looked into his eyes, he did not see a soul. According to Biden, Putin said, “If so, then we understand each other well.” Asked about that episode recently, Putin responded cynically that he did not remember the conversation, but that he trusts Biden’s memory.

In contrast to former American presidents who have navigated and managed issues, Biden is directed and managed by others. British Prime Minister Boris Johnson called Biden “a breath of fresh air” in contrast to his predecessor Trump, who made life hard for traditional allies in Europe. EU President Ursula von der Leyen admitted to Biden that the four years of the Trump presidency were difficult. Biden again told the Europeans that America has returned. However, there is great doubt as to whether this is the United States the Europeans expected given the growing challenges at their doorstep and the ongoing and growing tension with Russia.

In the meeting with Biden, Putin succeeded in creating the appearance that he is the stronger leader, more focused and determined than Biden. The big question is whether he will exploit this impression to resume escalation on the Ukrainian border, for example, in the coming weeks. In June 1961, 60 years ago, a summit was convened in Vienna between John F. Kennedy, the youngest president in the history of the United States, and Nikita Krushchev, the leader of the Soviet Union. The effort to bring the two superpowers together at the time was a colossal failure. Two months later, the Berlin Wall was built and, at the same time, the missile crisis in Cuba began. The Cold War had reached a climax. Will history repeat itself because of American weakness and failure to understand the global reality?

About Charles Railey 12 Articles
I recently retired from the federal government, having worked for many years on Middle East issues and regional media. My fascination with the region has never changed and this is one reason why the work of Watching America caught my eye. I live in the DC area with my wife, two grown children, and three cats.