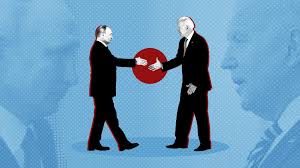 The meeting between U.S. and Russian presidents Joe Biden and Vladimir Putin yesterday in Geneva opens up a new perspective on the relationship between the two powers after a tense and deteriorating phase. It would be naïve to expect substantial improvement and strategic changes, but the meeting represents a welcome turning point. First, the return of the U.S. and Russian ambassadors to their respective embassies was agreed to, a symbolic gesture of diplomatic normalization; second, there was a willingness to engage in new negotiations to improve the framework for nuclear arms control, an area of enormous importance; and third, the opening of communication channels on cybersecurity to interact in the fight against certain types of crime. None of these measures alter the profound misunderstanding between the two powers, but the establishment of frameworks for dialogue fosters predictability and clarity in relations, which is an important element. This is an intelligent way of understanding international relations facilitating stability, which had been thrown into disarray in recent years by Putin’s unscrupulous actions and Donald Trump’s heterodox presidency in the White House.

Biden’s attempt to establish a new framework for dialogue was not appeasement. The U.S. president issued several strong warnings, including the importance given to cyber-security. The list of 16 types of strategic infrastructure provided to his Russian counterpart and the warning that the U.S. will respond in the event of a cyberattack — including during elections — have made clear a new red line between Washington and Moscow, which has always denied being behind such actions. Biden’s message on this matter has been unequivocal. Nor did the U.S. leader mince his words on the situation of the Russian opposition, especially that of its imprisoned leader, Alexei Navalny, warning of “devastating consequences for Russia” should he die. Biden’s approach of defending human rights and democratic values is correct, but his actual room to maneuver is very limited.

The White House is right in its attempt to combine unusual toughness and clarity on Moscow’s policy with a pragmatic openness to face-to-face dialogue. It is noteworthy that Biden met with Putin only after meeting with European allies on economic and defense issues. Here, too, the differences with his predecessor are enormous.

Russia is a power with great strategic resources — military, energy, geographic — but it is in obvious difficulty due to economic, demographic and political challenges. Putin has long opted to sustain Russia’s power profile through surprising and unscrupulous actions. While China is the great challenge for the West in this century, Moscow may bring enormous challenges and problems. One way to limit risks is to create frameworks of understanding and predictability. This is what Biden has rightly tried to do in Geneva.

About Stephen Routledge 111 Articles
Stephen is the Head of a Portfolio Management Office (PMO) in a public sector organisation. He has over twenty years experience in project, programme and portfolio management, leading various major organisational change initiatives. He has been invited to share his knowledge, skills and experience at various national events. Stephen has a BA Honours Degree in History & English and a Masters in Human Resource Management (HRM). He has studied a BSc Language Studies Degree (French & Spanish) and is currently completing a Masters in Translation (Spanish to English). He has been translating for more than ten years for various organisations and individuals, with a particular interest in science and technology, poetry and literature, and current affairs.