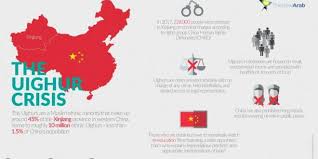 No country in the world has managed to transform public opinion into becoming a privileged recipient of lies told thousands of times until they become the truth. In fact, this practice, which dates back to the propaganda machine run by Joseph Goebbels, was one of several Nazi inventions that the United States faithfully imported.

Lies, to the extent that imperialism demonstrates its immense signs of decadence, are a great weapon to use against enemies — real or potential. This is how the U.S. currently uses the lie it has told a thousand times to try to harm Chinese national sovereignty using the Xinjiang Uighur Autonomous Region. Let’s get to the facts.

In August 2018, the world was surprised by the assertion of Gay McDougall, then a member of the U.N. Committee on the Elevation of Racial Discrimination, of the existence of 2 million Uighurs in concentration camps in Xinjiang. Obviously, this assertion was not backed up by any evidence, physical or material. It was the key for the propaganda machine of imperialism to get activated.

There are no coincidences. These lies appear just as China is making great strides toward achieving its national goals and with its international prestige on the rise. It is worth the reader knowing that 80% of all news produced in the Western world comes from just three agencies: The Associated Press, Agence France-Presse and Reuters.

Thus, the oligopoly of lies guarantees McDougall does not need to present evidence of her accusation. Since then, China has been accused, without evidence, of promoting the disappearance of people, mass rapes, forced sterilization of women and cultural genocide against Muslims in Xinjiang.

Interestingly, the biggest “source” of false information about the reality of Xinjiang comes from a far-right German intellectual, Adrian Zenz, who currently lives in the U.S. Coincidentally, he is a researcher at the Victims of Communism Memorial Foundation in Washington. His inconsistency does not reside solely in his lies.

He has never set foot in Xinjiang and, by his estimate, the number of prisoners in concentration camps ranges from 100,000 to 2 million Muslims. According to him, “I feel very clearly led by God to do this.”

Simple research is sufficient to demonstrate some fallacies. For example, one of the accusations is that China has a policy of mass sterilization that has led Xinjiang’s Uighur population to fall from 15.5 births per thousand to 2.5 births per thousand. However, according to the seventh national census released in May of this year, the Han ethnic group’s population growth rate was 4.93% and China’s population of ethnic minorities increased by 10.26% compared to 2010.

Another lie is about cultural genocide. The Chinese government is allegedly preventing the Muslim Uighurs from freely practicing their religion, including the use of their traditional clothing, and mosques are allegedly being violated. Now, in the name of democracy and human rights, U.S. soldiers looted relics from the National Museum of Iraq in 2003. However, in Xinjiang there are more than 24,000 mosques, and around 530 Muslims belong to each mosque. This number is more than double the total number of mosques in the U.S., Great Britain, Germany and France.

China has the right to defend itself from terrorist attacks in its territories. It is notorious that terrorist groups financed by foreign powers have been active in attacks against Chinese territory since a major attack in Urumqi in 1997.

Instead of invading countries, China has constructed reeducation centers against fundamentalism in the same model that exists in France, for example.

Why is the United States concerned with Muslims in Xinjiang while it killed around 650,000 people in Iraq and left thousands more homeless?

Social and economic progress in Xinjiang is impressive. According to the German statistics website Statista, between 2010 and 2019, the per capita income of this autonomous region grew by 110%. Its destiny is tied to the destiny of the Chinese people. As an inalienable part of the Chinese territory, it is guaranteed a future where its men and women do not have the same fate of war, hunger and barbarism as do the Arab territories occupied by the U.S.

Elias Jabbour is a professor on the Faculty of Economic Sciences at the University of the State of Rio de Janeiro. This article was produced in collaboration with China Media Group.