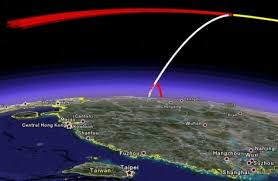 Japan must be on guard and increase its deterrence ability against China’s space arms expansion.

On June 23, Chinese President Xi Jinping talked via teleconference with three astronauts who are staying at China’s independent space station, which is under construction. Xi said that the construction of the space station “will make pioneering contributions to the peaceful use of outer space by humankind.”

It is difficult to believe Xi’s words as he stated them. They do not guarantee that technology related to the space station will not be used for military purposes.

China is advancing its space development, spearheaded by military leadership, with an eye toward competing with the U.S. as a “space superpower.” The three astronauts, who are affiliated with the military, stated to Xi that they are now “operating in orbit” and “proud of our great party and motherland.” The astronauts are to stay for about three months, and are said to be verifying technologies used for long-term stays, such as robotic arm operation and extravehicular activities.

After a leadership summit on June 14, a statement from NATO, which is comprised of the U.S. and various European countries, declared that attacks on man-made satellites of NATO member nations are subject to the right of mutual self-defense.

Following a U.S.-Japan leadership summit, a joint statement released in April pledged a commitment “to deepen defense cooperation across all domains, including cyber and space.” These statements are aimed at Chinese and Russian preparation for space arms expansion.

Through space development, China is trying to undermine the superiority of the U.S. military, which makes strong use of information from GPS and reconnaissance satellites.

In 2007, China was censured by the international community for spreading a large amount of debris (space trash) after an experiment that destroyed a satellite by missile. After the incident, it continued testing anti-satellite missiles, without further destruction. It is currently developing “killer satellites” and lasers for the purpose of destroying satellites.

Japan must make preparations in order to avoid falling victim to dysfunction caused by attacks on Japanese and U.S. communication and surveillance systems that rely on space.

On June 29, the Japanese government’s Strategic Headquarters for Space Development decided on a plan to undertake engineering research, in order to launch a number of small-sized, man-made satellites into low earth orbit and construct a satellite constellation of small-sized satellites to be used for surveillance and communication. (A satellite constellation is a group of several satellites that work together.) The satellites can be used for purposes such as missile defense, disaster response and ocean condition monitoring. Last May, the Japan Self-Defense Force inaugurated its new Space Operation Squadron, and in June of that same year, a revision to the basic space policy touted a goal to “ensuring space security” as the number one priority.

In the end, protecting citizens is the most important issue. We hope to make haste in cooperating with the U.S. to improve deterrence ability in space.

About Dorothy Phoenix 49 Articles
Dorothy is an independent video game developer, software engineer, technical writer, and tutor, with experience teaching students how to program and make games. In addition to programming and video games, Dorothy also enjoys studying Japanese language and culture. One of her goals is to exhibit a game at the Tokyo Game Show someday.