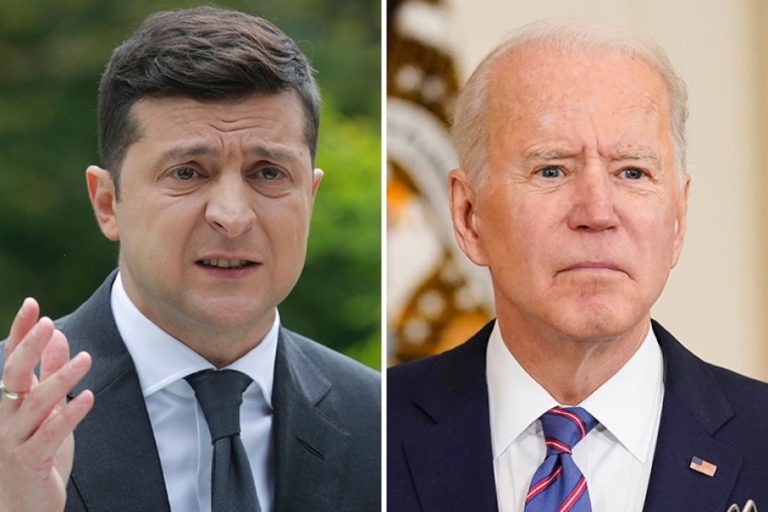 Zelenskiy shouldn’t go to Washington as if he is going to hear his verdict on the implementation of the Minsk Agreement.

Vladimir Putin has resigned himself to the fact that he would have to pay a steep price for direct aggression toward Ukraine, but fulfilled most of his domestic agenda at the Geneva summit. The Kremlin attaches great importance to the Minsk Agreement, as it is an instrument for destroying Ukrainian statehood. Putin started his own press conference with a reminder to Joe Biden: “As far as I understood, President Biden also sees the implementation of the Minsk Agreement as the only way to achieve peace in Donbass.”

Even though there was no joint statement, Putin somehow managed to get Biden to mumble publicly about “continuing diplomatic efforts within the framework of the Minsk Agreement,” the key phrase for Moscow.

The Kremlin’s propaganda shows continue to savor this remarkable success with undisguised triumph and cynical openness. The world still remembers Russian Foreign Minister Sergey Lavrov’s famous statement: “I believe that we mustn’t let Zelenskiy and his team get off the hook, but let them writhe on it as they might.” A patriotic Russian writer, Zakhar Prilepin, has recently declared that, “The Minsk Agreement is a huge trap for Ukraine, from which it will never get out until the complete loss of its statehood.”

The Minsk Agreement is de facto dead. It is clear that Putin will not voluntarily leave Donbass, as he promised, and the Ukrainian leadership will not destroy its own state for the sake of a false “restoration of Ukrainian territorial integrity.”

From a legal point of view, Ukraine’s position is flawless. Ukraine does not unilaterally withdraw from the Minsk Agreement. On the contrary, Ukraine has witnessed the Kremlin’s deliberate non-compliance with the basic provisions of the Minsk Agreement, such as a ceasefire and withdrawal of Russian military personnel and weapons, for more than six years.

In this situation, the only realistic options to stop the bloodshed and end the active stage of the war are to “freeze” the conflict, to cease the bogus talk about “reuniting the non-government controlled areas with Ukraine” and to introduce, under the United Nations mandate, military peacekeepers into a buffer zone on the border between the two sides.* What the invaders will call Crimea and the separate districts of Donetsk and Luhansk for some more years is irrelevant. The whole world calls them “temporarily occupied territories of Ukraine.”

Freezing the conflict will help stop the killings of Ukrainian soldiers that have been going on for more than six years. These killings are an important element of the Kremlin’s special operations forces within the Minsk Agreement. They are a classic form of terrorist blackmail: If you do not comply with our political demands, change your constitution, legalize the status of our military-terrorist foothold inside Ukraine, integrate our mob enforcers into the Ukrainian government, or we will continue to kill you along the line of contact.

The Kremlin’s approach to the Minsk Agreement is similar to Joseph Stalin’s approach to German reunification in 1952. Stalin also had his own “temporarily occupied territory,” which was called the German Democratic Republic (East Germany). He proposed to Konrad Adenauer, the West German chancellor, to finally fulfill the aspirations of the German people and reunify the Federal Republic of Germany and the German Democratic Republic, while preserving all communist institutions of the latter, such as the SED, Stasi, torture chambers, the people’s militia and Soviet troops.** After thanking Stalin politely, Adenauer noted that he would rather remain chancellor of only the Western half of Germany than become a political prisoner in a reunited Germany. The reunification of Germany took place on a completely different basis later on.

Freezing the conflict will allow Ukraine to solve the following problems:

• It will deprive the Kremlin’s blackmailers of their favorite political tools. No more of Lavrov’s hooks, Prilepin’s traps or Putin’s stranglehold.

• Ukrainian soldiers will no longer have to lose their lives.

• The real threat of large-scale Russian military invasion of the east will disappear.

• The central myth of Putin’s propaganda, “saving the Russian population of Donbass from the genocide instigated by the hordes of Bandera’s followers,” will become completely implausible.***

The unanimously negative reaction demonstrated by the American government to the Geneva summit creates a favorable climate for forging productive relationships between Ukraine and the United States. Above all, it creates an opportunity to expose the Kremlin’s special “Minsk hook” operation, to which the Kremlin would like to hook not only Zelenskiy, but also Biden, so that he will also “writhe on it as long as possible,” according to Lavrov’s recipe.

Not only the Republican media, but also most Democratic media has characterized Biden as a “wimp” after the Geneva summit. In this sense, the CNN article “Putin got exactly what he wanted from Biden in Geneva” is very revealing. The Biden administration has tried to assure critics of its unwavering support for Ukraine, while Biden, as “a political animal,” now has to listen not only to genuine or forced Kremlin sympathizers — John Kerry, William Burns and Jake Sullivan — but also to the pro-Ukrainian members of his administration: Antony Blinken, Lloyd Austin and Victoria Nuland.

In the Biden administration, there is a confrontation between the two groups of top officials. It may seem that the dispute is about some purely technical matters, some that are beyond the understanding of ordinary Americans. More precisely, it is about the urgent request made by a former “killer,” but incumbent president of a great country, to support his interpretation of the Minsk Agreement.

As a matter of fact, this is a very important issue of ideological and practical concern — as important as the annexation of the Sudetenland in 1938. It is a question of letting the Kremlin’s dictator keep on chewing up Ukraine or, on the contrary, of supporting Ukraine in its effort to stop this entertaining process for Moscow.

World leaders will draw strategic conclusions from the answer to this question.

Biden’s mind seems to be split, like his team. His every public statement invariably contains “unwavering support of Ukraine” along with “stable, predictable relations with the Russian Federation.” These two conditions are incompatible. But Biden doesn’t want to make an existential choice.

Ukrainian President Volodymyr Zelenskiy can make this choice instead of him. For Zelenskiy, it is the finest hour that life sometimes provides politicians with; it is an opportunity to positively influence not only the fate of his country, but also that of the world as a whole. Zelenskiy shouldn’t go to Washington as if he is going to hear his verdict on the implementation of the Minsk Agreement. In case of principled confrontation with the pro-Kremlin lobby of the White House — and if necessary, with the president of the United States — Congress and the majority of the American establishment will support Zelenskiy. That is why his visit to Washington must be seen as a verdict on that lobby. Whatever Biden’s hesitations and personal affections, he will not be able to ignore this political reality.

Borrowing the lines of the great poet Boris Pasternak, the upcoming visit to Washington is “demanding

From actors not a gaudy blend

Of props and reading, but in earnest

A tragedy, with tragic end.”

Andrey Pionkovsky is a publicist and political scientist.

*Translator’s Note: Following the Russian military occupation, Ukraine has lost control over the separate districts of Donetsk and Luhansk and the Crimean peninsula.

**Translator’s Note: The SED was the East German equivalent of the Communist Party of the Soviet Union.

***Translator’s Note: Stepan Bandera was a Ukrainian radical politician who pledged loyalty to Adolf Hitler during the Nazi invasion of Ukraine.