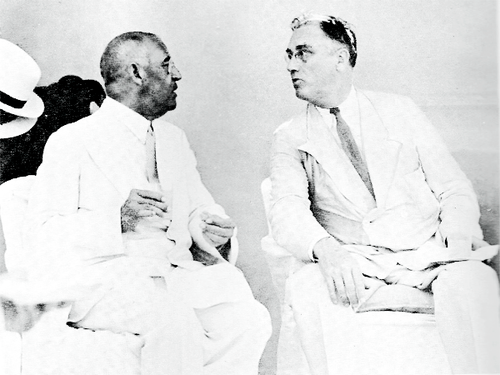 A century ago, the United States had already occupied Haiti for several years, actively shaping a large span of its history. American military forces are thus not welcome today. And Joe Biden knows it.

Since the assassination of Haitian president Jovenel Moise on July 7, there has been no consensus as to what role the United States could or should play in restoring order in the country. If it’s true that the Haitian government has asked for an intervention on the part of the international community, any form of American aid to the Pearl of the Antilles that reflects the least bit of toughness risks coming up against heavy historical baggage, largely overlooked by the American public.

At the beginning of the 20th century, as the U.S. emerged as a true world power, Haiti was shaken by serious unrest: from 1911 to 1915, no less than seven of its presidents were assassinated. Assuming the role of savior with the intent of ending the chaos, the United States, President Woodrow Wilson, intervened by sending hundreds of U.S. Marines in 1915. The operation rapidly turned into an occupation, and the occupation into an effort at quasi-colonization.

Following the adoption of the treaty of Sept. 16, 1915, Haitian finances, and the new Haitian gendarmerie were for all intents and purposes placed under the control of the American government, “supervised” by American officers.

Two years later, in 1917, when Congress declared war against Germany, in order to send American soldiers to Europe, Wilson dispatched the assistant secretary of the Navy to Haiti in order to rewrite the country’s constitution. It amounted to an additional strike against Germany: while few in number on the island of Hispaniola, the Germanshad largely dominated Haitian commerce at the beginning of the 1910s.

Fearing German influence so close to American territory, and that, well before the outbreak of the Great War in 1914, the Americans saw this reconstruction of Haiti some years later as the opportunity it had dreamed of to establish their power in the region and drive back one of the most important powers of the age.

A constitution backed by the U.S. was thus written and adopted, against the will of Haitian legislators. The new constitution, among other things, explicitly opened the door to the purchase of lands by American interests, a transaction until then strongly prohibited, and established a system of exploitation of Haitian labor by American business. Under the guise of reprisals against the deputies who rebelled against this constitution, the new Haitian president, set up by Washington, dissolved the legislative assembly of his country, which remained in effect for more than 10 years.

Upon his return from Haiti, the assistant secretary of the Navy was nominated as the vice-presidential candidate of the Democratic Party in the 1920 presidential election. During the campaign, he actively and repeatedly boasted about having personally written the constitution of a foreign country. “And, if I may say so, it is a pretty good constitution,” he said, congratulating himself in his speeches.*

Although he failed in his attempt to win the vice-presidency in 1920, it was grist for his mill when he launched his presidential campaign a decade later. In 1932, he was elected president of the U.S. by a landslide, and became one of the most important political leaders of the 20th century. His name was Franklin Delano Roosevelt.

And when he took the oath of office in March 1933, U.S. Marines still occupied Haiti.

The American occupation lasted 17 years, from 1917 to 1934. Although it came to an end more than three quarters of a century ago, this control left traces in the Haitian imagination, so much so that all the administrations that have followed at the White House since have stood particularly ready to provide financial aid to the country. The U.S. has doubtless given more to Haiti in direct and indirect aid than any other country in the world.

When the terrible earthquake devastated the country in 2010, President Barack Obama asked his two immediate predecessors, Bill Clinton and George W. Bush, to lead a vast effort for outreach and fundraising. (Clinton and Bush raised more than $50 million.) And in the years that followed, the U.S. invested hundreds of millions of dollars in aid to Haiti.

It is for that reason that on July 15, President Biden formally refused to send American soldiers there; not all Haitians would have welcomed them with open arms, and the outcome of such a mission would, in any event, be uncertain.

And history is not lacking in a sense of irony. At the moment he made his announcement, the president appeared at a press conference with the German chancellor.