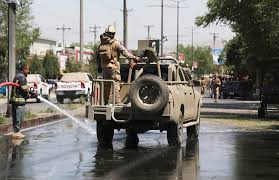 The final stage of the U.S. military withdrawal from Afghanistan is approaching. Along with this transition has come the rapidly expanding territorial rule of anti-government Taliban forces, as well as instances of government troops violating the borders of neighboring countries. The U.S. must strive to deter the expected mayhem.

On July 2, the U.S. military completed its withdrawal from Bagram Airfield, the largest U.S. military base in Afghanistan. The main work toward complete withdrawal at the end of next month has been finished.

Concurrently with the U.S. military withdrawal, the Taliban have gained total control of more than half the country, with most of the control centered around rural areas. The reason for this rapid advance cannot be explained solely by the role of the military.

Afghanistan is a multiethnic nation. In the past, the Taliban were mostly made up of Pashtuns, the country’s largest ethnic group. But now it is also rooted in other ethnic groups, such as the Tajiks, who are propping up its expansion.

On the other hand, the Afghan government, which is supported by the U.S. and other countries, has lost its power to unify due to corruption. As deserters continue to leave national security forces, the anticipated revival of Taliban power is happening in an avalanche of support.

About 20 years ago, the Taliban, which harbored the international terrorist organization al-Qaida, crumbled as the U.S. exerted military force in Afghanistan. However, the current situation, which can be seen as the moment of the Taliban’s revival, is an indication that military intervention has failed.

But the idea that the Taliban’s comeback will transform Afghanistan into a hotbed of terrorism is probably a bit too hasty. The Taliban are exerting pressure on extremist groups such as the Islamic State. If anything, the concern should be about the disorder that comes with the U.S. military’s withdrawal. There is concern that both U.S. military collaborators and anti-Taliban citizens will flee the country as refugees.

President Joe Biden’s administration has worked out a plan to protect citizens who worked for the U.S. military in capacities such as translators. But the number of people protected under this strategy is limited. At the close of the Vietnam War, a large number of refugees became boat people. To prevent a repeat of such a tragedy, drastic measures must be taken quickly.

There is a heap of diplomatic problems. Routed government forces have temporarily fled across the border into Tajikistan, but coordination with Russia and China, which are influential in that region, has slowed. Suspicion of the Biden administration has grown stronger, both among the Taliban and in Pakistan, which has its own thick pipeline of diplomacy with the Taliban, as the Biden administration shifts its attention toward China and strengthening its relationship with India.

U.S. efforts at democratization, which was cited as the reason for U.S. intervention, have failed in the Arab states, not to mention in Afghanistan. Accountability in this area must also be called into question.

In this war, more than 2,400 U.S. soldiers have died, but the number of Afghan citizens lost is numbered in the tens of thousands. The U.S. has a duty to finish cleaning up after its intervention.

About Dorothy Phoenix 68 Articles
Dorothy is an independent video game developer, software engineer, technical writer, and tutor, with experience teaching students how to program and make games. In addition to programming and video games, Dorothy also enjoys studying Japanese language and culture. One of her goals is to exhibit a game at the Tokyo Game Show someday.