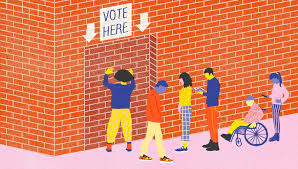 It has been half a year since President Joe Biden took office, a president who has appealed to the American people to come together and revive democracy. But in reality, it appears that division is intensifying and the headwinds against democracy are getting stronger.

This division is symbolized by a trend toward restricting voting rights that is spreading around the country. Early voting periods have been cut short; in the case of mail-in voting, voters must present identification.

Black voters, who support the majority Democratic Party, overwhelmingly use these ways of voting. When you consider the number of people who do not have ID, Black people rank extremely high at 13%, so there are many limitations.

This year, 17 states, including Georgia, have developed voting laws. Most of these states have a strong Republican constituency. Though supporters claim that the purpose of the laws is to make it hard to cheat, isn’t the goal really to restrict opportunities for Black people to vote?

The core of democracy is the sovereignty of the people, which is guaranteed by free and fair elections. Needless to say, it is a basic premise that all people who have the to right to vote should be able to.

Politicians are obligated to provide an environment that is fair, and in which all eligible voters can easily vote. The history of giving Black people the right to vote and expanding voting rights to women is proof. The trend toward voting restrictions violates this spirit.

Former President Donald Trump, who was defeated in last year’s election, alleged that the election was tainted by “great voter fraud.” Although there were some procedural problems in investigating voting, there was no verified systematic fraud.

Nevertheless, even now, more than 5% of Republicans do not recognize Biden as the legitimate president, a situation that ought to give one pause.

To the defeated Republican Party, there is a sense of impending threat to next year’s midterm elections, and the presidential election in three years. If the party does not try to correct the distorted opinion that the public has about elections, but instead takes advantage of those views to strengthen its party, there probably is no way to avoid the fact the party is dismissing democracy.

Biden has criticized the voting restriction laws as “an attempt to suppress and subvert the right to vote in fair and free elections, an assault on democracy,” and his administration has sued the state of Georgia to suspend enforcement of its voting law.

The Democratic Party has sent a voting reform bill to Congress that is based on safeguarding voting rights. However, the Democrats have not been able to get the bill passed in the wake of the Republican Party filibuster. Biden should try to find common ground and compromise.

Even if the U.S. promotes the superiority of democracy to the international community, its call will not resonate with anyone if the ground under its own feet remains unsteady.

About Dorothy Phoenix 43 Articles
Dorothy is an independent video game developer, software engineer, technical writer, and tutor, with experience teaching students how to program and make games. In addition to programming and video games, Dorothy also enjoys studying Japanese language and culture. One of her goals is to exhibit a game at the Tokyo Game Show someday.