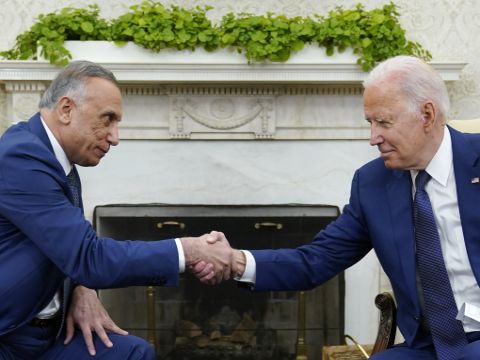 President Joe Biden and Iraqi Prime Minister Mustafa al-Kadhimi agreed during their meeting at the White House on July 26 to end U.S. operations in Iraq by the end of the year, more than 18 years after American soldiers were first deployed there. “Our role in Iraq will be to be available, to continue to train, to assist, to help and to deal with ISIS as it arises, but we’re not going to be, by the end of the year, in a combat mission,” Biden told reporters after the meeting.

The American move is seen as an attempt to support the Iraqi prime minister, given the growing pressure on him by Iran and pro-Iran Shiite militia groups that continue to attack the American Embassy in Baghdad and the military bases where U.S. soldiers are stationed with rockets and armed drones. Iran is pressuring the Iraqi parliament to immediately end the presence of all foreign forces in Iraq. Iran sees this as a way of taking revenge and humiliating the United States for assassinating Qassem Soleimani and Abu Mahdi al-Muhandis on Iraqi soil. The punishment, according to Iranian thinking, must be the expulsion of every last American soldier from Iraq.

The bottom line is this: According to the agreement between Biden and al-Kadhimi, U.S. troops will not withdraw from Iraq. There are currently 2,500 U.S. soldiers in Iraq helping local forces fight against what remains of Islamic State. By the end of this year, U.S. forces will no longer engage in military operations, and will only train and advise the Iraqi army. A significant change in U.S. influence in Iraq is not expected given that for some time, the U.S. Army has focused on training Iraqi forces.

“There is no longer any need for foreign forces on Iraqi soil,” al-Kadhimi said at the end of his meeting with Biden, adding that the timetable for withdrawal of American forces will be in accordance with Iraqi needs. According to al-Kadhimi, the Iraqi army has already proven itself and is “capable, by itself, in dealing with ISIS cells that remain on its soil. The war against ISIS and the deployment of our army’s special forces requires a special timetable. This depends on contacts with Washington.”

Al-Kadhimi added that his country “possesses American weapon systems that require maintenance and professional training. We will request that the United States continue to support this.” The joint announcement by Biden and al-Kadhimi comes simultaneously with the withdrawal of U.S. and NATO forces from Afghanistan after 20 years, ending America’s longest war. At the beginning of the month, the last American soldiers left Bagram Airfield, the main base that served U.S. troops during 20 years of fighting and, at its peak, hosted almost 100,000 U.S. soldiers.

Russia is happy with the American withdrawal; it believes that Biden will also withdraw or redeploy U.S. military forces in Syria, and will try to exploit this in order to reshuffle the deck and bring a halt to aerial bombing by Israel in Syrian territory.

It is likely the Biden administration well understands the significance of a complete withdrawal of all U.S. military forces from Iraq. The administration does not intend to present Iraq to Iran on a silver platter, something that is complicating nuclear talks in Vienna as Iran races to become a nuclear “threshold state.”

The new agreement between Biden and al-Kadhimi to end U.S. Army combat operations in Iraq at the end of the year signals the end of strategic dialogue between the two countries, which began under President Donald Trump and went four rounds. The two sides are entering a new stage of military coordination; in practice, nothing will change. This is a blow to Iran, which hoped for a complete withdrawal of the U.S. military from Iraq.

The Iranians are excusing the failure saying Congress placed heavy pressure on Biden. However, Iran and its militias in Iraq will not remain silent, as they see the sophistry, deception and the overwhelming nature of the Iraqi parliamentary call for an immediate, full withdrawal of all foreign forces from Iraq.

The pro-Iran Shiite militia groups in Iraq are expected to continue their attacks on American targets in Iraq and even escalate them as if nothing has changed. This represents a challenge to the Biden administration, which has already attacked pro-Iranian military bases on the Syria-Iraq border twice to convey a message to Tehran to stop its attacks on American targets in Iraq.

The important point is that the United States must not compromise, despite all the media spin, on a military presence in Iraq and on its full control of Iraqi airspace. The Americans are trying to create the impression that its military will engage solely in training activities in order to bring a halt to attacks, but the Iranians are not buying the story.