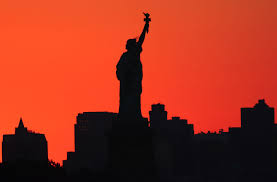 It’s been resolved and there is no longer any ambiguity. The American withdrawal from Afghanistan is a withdrawal from the region, from the greater Middle East. With this withdrawal, America seeks to leave the post-9/11 era behind, but it is laying the groundwork for a more turbulent phase. Other world powers such as China, Russia or even Iran — candidates who could fill the vacuum, have not offered any better models of involvement.

Even more dangerous is what remains of the U.S. military presence, scattered here and there, no longer inspiring confidence, nor providing objectives for the countries and people who relied on American cover or protection and still do. While there are those within the U.S. and internationally who are now blaming the successive administrations that inherited dysfunctional patterns of handling the Afghan issue, the consequences of these mistakes and failures are worse than those of defeat. The American invasion tricked Afghans into believing that the United States had eliminated the nightmare of the Taliban and handed the Afghan people a dream of a country in which they could live. But now that the withdrawal is accelerating, the nightmare has returned, dissolving these dreams.*

It was not the U.S. military that was defeated in Afghanistan, but the greater American project. While Washington bears responsibility, it also falls on the shoulders of the Afghan political class, which was given a historic opportunity wasted by notorious corruption and endless factional conflicts. American responsibility started when it established the best bad regime available to it in Kabul; the responsibility of the Afghans lies in the fact that, in 20 years, they did not make the necessary efforts to correct, reform or develop that system, despite having $2 trillion allocated for regional development, in addition to military spending. Meanwhile, the Taliban was able to mobilize the public against the corruption of the ruling class. Finally, perhaps the biggest American-Afghan failure is the failure to produce any acceptable national reference that would reunite the country and constitute an alternative to the Taliban.

The American project was also defeated in Iraq. Before the U.S. withdrew from Iraq in 2011, it pushed through the establishment of a new regime. It took the initiative to abolish the existing state and its army to satisfy the “new rulers,” who seemed qualified for everything but building an inclusive state for Iraqis. Then, only after receiving astronomical sums in American bribes, Iraqis began to profess their loyalty to Iran and institutionalized their corruption by establishing mini-states for their parties and militias. In that context, divisions deepened further and historical grudges were exhumed, fueling the sedition that planted the seed of the Islamic State, which transformed into a more brutal and criminal organization than al-Qaida. Here, too, America had a responsibility to establish stable government but failed.

And what about Iran-Iraq relations? The war on terror undermined the economy and gave Iran and its militias the opportunity to establish a dual system between the government army and the Iraqi Popular Mobilization Forces as a parallel army. While the government of Mustafa al-Kadhimi was able to score points in terms of state-building, it was forced to seek a reduction in the U.S. presence in Iraq, while Iranian influence became more entrenched and virulent, as if inspired by the Taliban model.

The two wars and the occupations led to the same disastrous results in Afghanistan and Iraq, with only slight differences. But the costs and repercussions of these conflicts have had a far greater impact on geopolitics, contributing to the growing power of China, which now aspires to compete with the U.S., and not just in trade. Russia has also returned to the international stage, as if its Soviet heritage were an attractive model. Of course, Washington is looking at a major confrontation in Southeast Asia, but its resounding loss in Afghanistan has revealed a deficiency, the negative effect of which will become increasingly pronounced in all the roles it plays or in its dominance of the greater Middle East. Wherever you turn today, you see conflicts the U.S. has had a hand in igniting or inflaming to meet specific objectives, while other parties continue to fight or have already beaten the U.S. in fulfilling these objectives.

From Afghanistan to Syria and Iraq, to Yemen, Lebanon and Palestine, the U.S. is discovering that its sphere of intervention is narrowing. For a time, it was believed that the U.S. had reached an understanding with the Taliban on path for withdrawal and beyond, especially with regard to the transition phase, but the rapid developments and insistence on full military control left no doubt that the Taliban’s only focus was on withdrawal, restoring power and taking over the larger Afghan army equipped with advanced American weapons. The Kabul government is no longer just weak, but also marginalized, with no choice but collapse. The Taliban had not been expected to replace the American invasion and occupation with its own. It matters little that the Taliban are an Afghan contingent, since it displaces and persecutes its own people.

In fact, wherever Washington intervenes or wants to intervene, it finds only powerful militias, broken states, marginalized armies and weak puppet governments. In Iraq, one cannot avoid the Popular Mobilization Forces as they carry out Iran’s wishes exactly as set out by the Revolutionary Guard. Likewise, the Houthis of Iran have intervened in Yemen, where the legitimate government has become the weakest link among the coalitions in the north and the separatists of the south. The same goes for Hezbollah in Lebanon, where the state has no say, while the “party” decides war and peace or the terms of the economic crisis, just as the two Hamas movements do in Palestine. Then there is the Iranian jihad in Palestine, which shares Israel’s goal of undermining the Palestinian Authority, albeit with different motives. Even in Syria, Russia is no longer able to tame Iranian-Bashar Assad complicity in order to reach an understanding with the U.S. on a political settlement of the crisis.

During the American presence in Afghanistan, neighboring countries attempted to strengthen the capabilities of the Taliban and help it defeat the U.S. Now that the U.S. is withdrawing, the game will change, ushering in a phase of regional transformation. The countries surrounding Afghanistan will initiate this transformation and face conflict and civil war, as they complain about the reemergence of terrorist groups taking advantage of their relations with the Taliban. As for America’s plans to entrust regional countries such as Israel and Turkey with managing the Arab Middle East, the U.S. has faltered, whether because Iran penetrated four countries and Palestine, or because Russia joined the game and cultivated interests with three of those countries. The question remains: Will America’s departure put it on easier terms with Russia and Iran?

*Editor’s note: The Taliban assumed control of Afghanistan on Aug. 16 after this article was originally written and published.

Published in conjunction with the Al Nahar Al Arabi website.