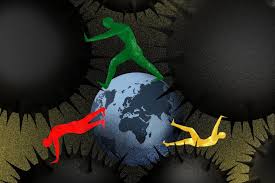 Fast recovery of the U.S. attracts immigrants and can generate long-term advantages.

A 10-hour flight, a few thousand reais and a passport with a special visa separate Brazil, where many people are still waiting to be vaccinated against COVID-19, from the United States, where people walk the streets without masks among signs announcing job openings.

Foreigners arriving in the U.S. find a country enjoying the final stretch of summer. Visitors and locals hug friends, plan trips and flock to tourist attractions, crowded bars and restaurants.

Despite the movement in the streets, the local news emphasizes the advance of the delta variant, which has been generating a high number of new cases in the country. The use of masks is once more being required in cities like Washington, D.C., where most people carry them in their pockets and wear them only when entering closed places, such as a pharmacy or the subway.

The risk of the onset of cold weather worsening the situation is real. The main challenge now is to convince approximately 40% of Americans who have not yet been vaccinated to get their doses. Rewards had limited effect, and now companies and governments are starting to require the immunization of their employees. Nevertheless, the vaccines themselves are guaranteed. It is just a matter of going to get them.

Traveling from one country to another evokes the feeling that the pandemic has increased the reality gap between rich and developing countries. In the U.S., some good economic numbers have followed the increase in vaccination and the decrease in death over the last few months. The unemployment rate has reached 5.4%, the same level as in 2015. Before the pandemic, it was 3.5%.

These conditions are attractive for immigrants and reveal a process that could further delay the recovery of developing countries. With fewer people to think of alternatives and put them into practice, moving forward becomes more difficult.

For now, only Brazilian immigrants who fit into certain categories, such as university students and specialists in areas such as chemistry and IT, are allowed to enter the U.S. The United States may gain a long-term advantage for having its doors reopened earlier, while many countries still restrict the entry of foreign students. In the future, these immigrants will be able to create new technologies and improve current ones, including techniques to fight other pandemics.

Simultaneously, the number of people trying to enter the country by crossing the Mexican border illegally is rising. Twenty-two thousand Brazilians were captured between October 2020 and May 2021. These immigrants are ready to take employment opportunities at essential functions that often don’t attract Americans, such as cleaning, building houses, and producing and distributing food. Many Brazilians willing to work hard and take risks prefer to face a dangerous journey that lasts for several days and cost tens of thousands of dollars instead of continuing to live in Brazil.