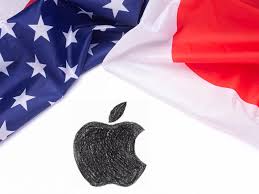 Information technology giant Apple has decided to revise the rules for the fees it imposes on app development companies.

Apple was accused of violating the (Japanese) Antimonopoly Act and was examined by the Japan Fair Trade Commission in response to the allegations. Apple has decided to allow app companies to route consumer to a direct billing system on smartphones.

Apple produces the iPhone, the best-selling smartphone in Japan. The companies that supply its apps are forced to follow Apple’s rules. App companies pay a premium of up to 30% more for Apple products, known as the “Apple Tax,” something that has been a source of growing frustration for app companies.

The digital services industry has a winner-take-all character and is becoming oligopolistic. Currently, Apple and Google effectively have a monopoly on the global market for the underlying systems that power smartphones.

If the companies that are responsible for the underlying platform are allowed to set the rules for their own benefit, profits will become increasingly concentrated, and healthy competition cannot be maintained. High fees will also impose a burden on consumers.

Apple will apply its revised fee structure worldwide next year. One might say this is the result of the tough position that the Japan Fair Trade Commission took. How can we ensure fairness in the expanding digital market? We must continue to take measures while paying close attention to the market.

Regulators and others in every country are working hard to deal with the IT giant. South Korea passed a related bill in South Korea at the end of August to prevent Apple and Google from enforcing their payment systems. In the U.S., the home of the IT giants, the attorneys general of 37 states and regions filed a lawsuit against Google in federal court in July alleging violation of antitrust laws.

The IT giants are trying to maintain their profits with a mix of hard and soft responses to the growing trend of tightening regulations.

It is important to note that Apple’s change in its payment system is limited to apps that distribute books, music and videos. The company currently see games as the largest source of commission revenue, and they are not included in the revisions. The company may be trying to fend off criticism by conceding somewhat to prevent a more drastic review.

While countries have been forced to run deficits to cope with COVID-19, the IT giants have continued to grow their business by tapping into the growing demand resulting from staying at home.

How can we regulate the monopolies of corporations that have begun to wield influence comparable to that of the state? This is a major issue that we must face.